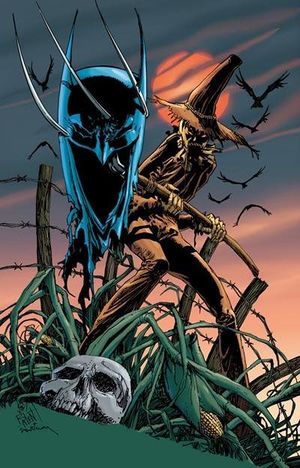 The Scarecrow is a master terrorist or a supervillain (they're pretty much the same thing). He is commonly referred to as "The Master of Fear" and has many hobbies, including "trying" to be scary and collecting douchebags (he actually has a very big collection). There are only a handful of people who are able to understand what Scarecrow is saying due to the fact that he always has his mask on too tight, thus everything comes out as mumbles (making life pretty difficult for him). He is primarily an enemy of Batman, though he has fought many other superheroes (and pretty much failed against them all). Thus far he has only been able to defeat Aquaman, but then again who hasn't.

However, the truth is... Scarecrow is not a loser, or at least not a major one. It's true at the Christmas parties, he is constantly mocked by such villains as The Joker, Two-Face and Poison Ivy (although it's always great to be mocked by her). However, he has been able to out wit such villains as Harley Quinn and The Riddler, whose special power is the ability to think really hard. Catwoman seems to leave him alone (most of the time) and Bane even considers him to be a great partner (when he needs someone to break in the gym). Scarecrow is also one of the most feared villains in all of Gotham City (behind about seventy eight other villains that have fought Batman). In the end, Scarecrow considers himself to be his greatest enemy because he suffers from an immense fear of the world.

Scarecrow's origin dates back to a time when the world was at peace, meaning a time that took place before 2001. He was originally born as Jonathan Crane (really, "Crane" is his last name), a decedent of Icahbod Crane and the twig he married when he failed to win over his beloved Katrina (and she went out and married a jerk). Crane was very skinny and scrawny, in fact many people thought that he was bulimic and told him that it was the wrong way to lose weight (only to be shocked when they learned that he really was this skinny). Crane's parents were always going out on trips for themselves, leaving Crane with a baby sitter named Vicky (who tormented him beyond imagination). Crane was very unhappy, and since he had no fairy godparents to help him, he developed an advance fear of women and chores. Due to his fears, Crane turned to the one thing that all people turn to when they have problems, Mad Science. Crane loved doing Mad Science, but one night he accidentally caused a massive explosion after mixing the wrong chemicals (he then formed a major fear of fire and scientific accidents).

When Crane went to kindergarten, he met Harvey Dent, Oswald Copplepot and Bruce Wayne, who all immediately shoved him in the dumpster within five minutes of meeting him. Crane however felt like they were all friends and continued to hang out with them, getting shoved into the dumpster again and again. Eventually he accepted the truth, no one was emptying this dumpster. Crane soon developed a fear of trash and could never go to class again. He ran away from home after he had grown to fear everything in the house (no one noticed). He lived on the streets stealing from hobos (or at least he tried). Despite his best efforts, the hobos beat him up whenever he tried to steal from them, and so he developed a fear of hobos. Then one night while he was sleeping he was attacked by ninjas, he then developed a fear of ninjas and the dark. He lived on the streets for the next couple of years, forming so many more fears. 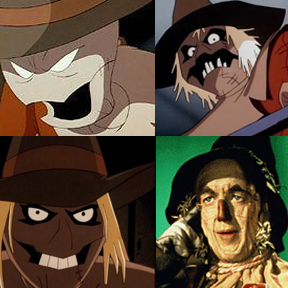 Crane's various costumes throughout the years.

At the age of 28, Crane finally formed his final fear, a fear of polluted air (which developed after he heard that deadly germs could travel through the air). In an attempt to help him cope with all of his fears, Crane completely covered himself in potato sacks (because potato sacks contain a special ability that allows them create projectile shields that can block deadly germs). However he had trouble breathing, so he added some straw to make little holes that he could barley breath out of (so that he could breathe and germs couldn't get in). Then he added a hat to the outfit (because he thought it looked cool). However, his new look made him stand out and he soon became a very recognizable figure, as did all of his fears. Because he possessed every single fear that a man could possibly posses, he became known as "The Scarecrow, Master of Fear."

Crane kept telling everyone to stop calling him that, but since he could really only mumble under the very tight mask, no one got the memo. Instead they threw pies at him and made fun of him. Crane then realized the truth about his life, pies are very tasty. So Crane decided to use his new look and become a supervillain and receive even more pies from the public. So he started attending classes at the New York University of Villainy, where all villains go to get their degrees in terrorism. At the university, Scarecrow met Christopher Nolan, who quickly became a close friend. The university was dirty and everyone was mean to him, but Scarecrow graduated with his major being "Best Captured Villain." Scarecrow was so happy that he went out and got himself drunk (and was found in the trash the next morning). Scarecrow then moved to Gotham City to seek the mighty superhero known as Batman, choosing to ignore all the professors' advice about fighting Aquaman first. Scarecrow eventually encountered Batman and fought him in combat. But Batman quickly ripped off Scarecrow's mask, causing him to freak out because his face was exposed to all the germs that may have been in the air. He was then quickly sent to Arkham Asylum, but escaped one night because the guards forgot to lock his cage. He returned for revenge against Batman, only to be defeated in the exact same way. Since then he has constantly returned for revenge (and never succeeds). Scarecrow later used his gas on Joker, it failed so he shot Joker in the arm and escaped.

YOU WILL SMELL SCARECROW'S WHITE POWDER OF DOOOM!!!!!!!

After taking so many defeats from Batman, Scarecrow used his knowledge of chemistry to create a special weapon that would make his defeats a little less humiliating. He discovered that combining Penicillin, Tum-Tums, Lucky Charms and doughnut powder creates a special type of gas that makes people hallucinate all of Hell breaking loose. He also can make this gas into a pill, a candy or even a prize in a Cracker Jack Box. He was very excited to name this new gas and he spent long nights looking through books and thinking of what to call it. Finally on the fourteenth day he came up with the best name he could think of: Fear Gas (no really, this is the name).

What is he doing now?[edit] 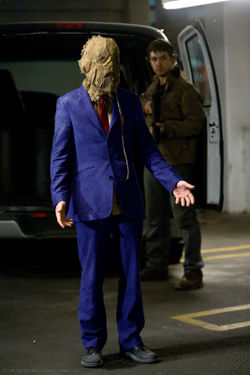 Mr. Scarecrow campaigning as a Democrat for the 2008 Presidential Election.

Eventually, Scarecrow decided he was very tired of being socked in the face (especially since he was now blind in one eye and almost blind in the other). So after twenty years since graduation, he took some classes to help him get over his fear of the world. During these sessions he was taught by world famous criminal therapist, Ms. Harley Quinn, who was in a romantic relationship with the criminal mastermind known as the Joker. He made a tremendous amount of effort and started to take off some of the potato sacks. He opened up a little shop and started to sell his gas as a special drug to people. For some reason, it sold well and he quickly became a billionaire. He now volunteers and helps with community service. He even donates thousands of dollars per week to children charities and animal shelters. He has also gone public and stays in close contact with his old friend, Christopher Nolan.

At one point, Scarecrow asked Nolan to help him make a movie about his early life to show to the public, Nolan agreed to do it and even combine it with some action movies he was working on. This resulted in the release of the hit movies, Batman Begins and The Dark Knight. Nolan decided to save his old friend some acting work and casted a random actor named Cillian Murphy as the Scarecrow for the films. Scarecrow was very happy with Murphy's portrayal, though stated that Eddie Murphy would have been a more accurate choice. However due to the success of the movies, both Murphy and Scarecrow gained much fame and popular attention, even if a majority of it was negative publicity. Scarecrow also helped with other movies in that were currently in production, he even designed the costumes for the horror movie, Strangers. In 2008, he ran for the Democratic Presidential Nominee. He actually gained much support thanks to his friends within the Gotham City underworld. He made it very far and almost reached the point of being the nominee. However he pulled out and let Barack Obama take his place because of an accidentally Fear Gas leak poisoning Gotham's water supply (and he had to pay the bills). Very recently Doctor Crane has came out as a mad ragining homosexual, who, in particular has the hots for a certain Caped Crusader. Unfortunately for Crane, when he uses his fear gas on Batman, the Dark Knight imagines Mr. Crane giving him a right good bum up the ass...Batman would much rather prefer young flexible boys in red and green tights....aka Robin.