From Uncyclopedia, the content-free encyclopedia
Jump to navigation Jump to search
!!Warning!!


This article contains bad punning and overuse of referencing.
May cause internal hemorrhaging and violent tendencies.
Read on at your own risk. 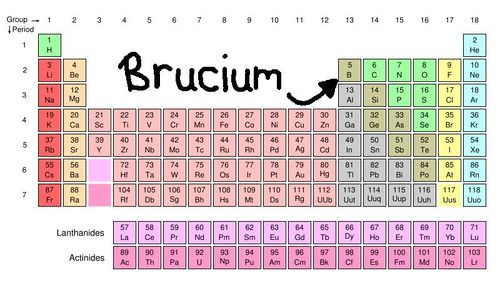 For those without comedic tastes, the self-proclaimed experts at Wikipedia have an article about The Fifth Element.

Brucium, commonly referred to as The Fifth Element, is the fifth element in the periodic table and has the chemical symbol "Bm". The most common type is blue uniformed in character, although in actual fact several different types of Brucium exist, one being "Maclaneite", a rugged ore which is noted (especially by the Eastern Europeans) for its extreme hardness under pressure. Found to a certain degree in all the worlds oceans, twelve separate ores have been discovered to date.

One of the earliest types of Brucium found was discovered in France and was radioactive. It threw out so much heat it literally got the mercury rising. It has a half-life (or "demi-mort"[1] in French) of about 11 years. 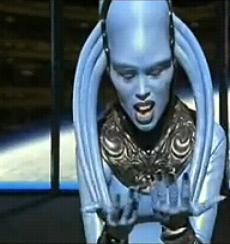 Caution: Improper laboratory use of Brucium often causes the instantaneous staining of ones clothes, hair and skin blue.

The discovery of Brucium was eventually confirmed by Japanese scientist Yip P Kiyay[2] of Nakatomi Laboratories in 1980. He first postulated the existence of Brucium in 1955 when he looked at a picture of the periodic table of elements and realised that there was a gap between element number 4 -Beryllium, and element number 6 - Carbon. At the time, he was making money as a full time gambler playing the slots in Las Vegas. He soon discovered however, that he found moonlighting as a substitute chemistry teacher in a local high school much more satisfying than playing the bandits, and decided to go the whole nine yards by making the move into full time chemical research a few years later in 1963. Ironically, the school which caused him to focus his career on chemistry was only 16 blocks away from where he would finally achieve his goal. Although initially mocked by his superiors, Yip made some extraordinary leaps of logic while searching for the element and, claiming he was being guided by a sixth sense, said he "would succeed against all enemies". Many doubted his sincerity but a mere 17 years later, in 1980, he isolated the elusive element and took his place in the history books (of chemistry).

The main use of Brucium is found in the production of armor. It's often used in conjunction with other chemicals to form protective plates which are nigh on unbreakable. These can then be incorporated into tank armour, ballistic vests, string vests, and other protective structures. The vests have been subjected to rigorous testing [3] and are now used mainly in the military services although interestingly the protective use was discovered more or less by accident.

Discovery of the protective uses of Brucium[edit | edit source]

Initially the Brucium infused plates were used in food preparation because of their easily cleaned surfaces, and this transferred across into wipe-clean clothing containing Brucium micro-fibers. It was only when a careless keeper at L.A zoo entered the safari reserve after cooking a grease laden, bacon and runny egg sandwich with extra tomato ketchup that the protective qualities of Brucium were realised. Wrapping his food encrusted wipe-clean apron around him, the keeper was able to withstand an attack by twelve monkeys, a Hudson Hawk[4] and several other smaller predators. After the animals were drugged and removed, the keeper, Billy Bathgate, was pronounced well with only minor scratches. "I've no idea what just happened" he said "those animals just went crazy. Thankfully as soon as I realised that they were within striking distance, I wrapped my Brucium apron around me and was able to withstand most of the attack. Only the jackel, Nancy, drew blood." 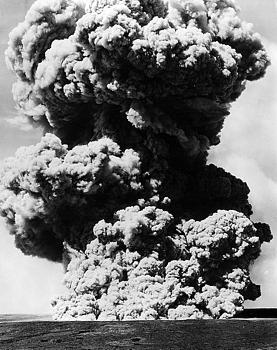 This is the sort of explosion that Brucium can typically withstand

Brucium as well as being being useful in crafting buildings with a very strong structural integrity, also has an ability to absorb radioactive neutrons without producing long lived radio-nucleotides which release gamma waves. It's strength and ability to absorb such radiation is key to it's use, not only in nuclear reactors, but also in nuclear bunkers. In fact, if Armageddon ever happened and the apocalypse arrived, it's likely that whoever made it into a Brucium reinforced bunker would be the last man standing.

Use in engineering[edit | edit source]

The other notable use of Brucium (again, because of its function as an additive in forming strong metallic structures), is its use in the casting of metal shapes used for precision engineering. Normally a steel jig would be used, however, to be assured of the highest tolerance possible, many companies add Brucium into the cast alloy compound when they really need to make the die hard.[5] Incidentally Williscium (atomic number 74) can make the die hard too.[6]