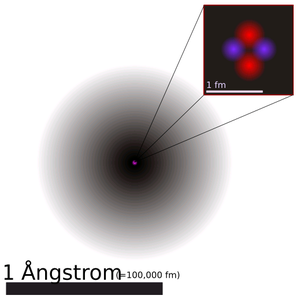 In the name of the Proton, the Neutron, and the Electron Cloud. Amen.

Atomic Mass is the church service held every Sunday for Christian Scientists. Pioneered in 1951 by Nobel Prize-winning chemist Glenn T. Seaborg, it is a highly modernized service that combines centuries-old Christian tradition with contemporary scientific concepts. Contrary to most uses of the name "Mass" for Christian services, Christian Scientists are not in fact in full communion with the Roman Catholic Church, retaining the name instead because of its scientific connotations.

Prior to the introduction of the Atomic Mass, Christian Scientists did not have a standardized Sunday service. From the founding of The First Church of Christ, Scientist in Boston in 1879, each other church was founded separately, without any influence from each other. Despite this, their liturgies were strikingly similar. This chain of events is pointed to by members of the church as evidence of divine intervention in the creation of the church and is known as the "Spontaneous Generation". This continued for a number of decades, eventually culminating in the church spreading across the United States as well as some areas in Canada and Europe. 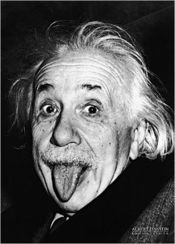 How could anyone disagree with a man with such a grand coif?

The idea of merging all of these separate yet similar churches was first proposed in 1921 by Albert Einstein. Having won the Nobel Prize in Physics that year, Einstein's proposal carried considerable clout, and the sheer majesty of his hairstyle brought any remaining naysayers over to his side. Talks were immediately held to combine the churches into one centralized church with a structural hierarchy. These talks concluded in 1922 with the creation of the centralized Church of Christ, Scientist in what is now known as the "Ecclesiastical Fusion". 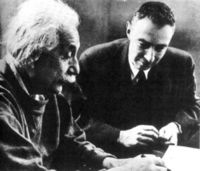 This new church, however, still did not have its own service. While the central organ of the Church of Christ, Scientist produced lists of recommendations for services, a full structure was not proposed until 1947 by the American "father of the atomic bomb" J. Robert Oppenheimer. He advised the creation of a service modelled on that of the Roman Catholic Church, which he called the "Critical Mass". This proposal ultimately fell through due to the fact that Oppenheimer was not a member of the church or even a Christian, but was rather Jewish. Attempts to point out that Einstein, father of the Ecclesiastical Fusion, was also Jewish by ethnicity were also ignored, mainly because Oppenheimer's hairstyle was rather unspectacular.

Nevertheless, Oppenheimer's ideas for the church still retained a small audience. Among them was fellow Manhattan Project researcher Glenn T. Seaborg. Seaborg waited for the clamour over Oppenheimer's original proposal to die down, fine tuning its specifics before reintroducing it in 1951 as the "Atomic Mass". Just like Einstein thirty years earlier, Seaborg's Nobel Prize in Chemistry that year added significant star power to the idea, and it was adopted January 1, 1952. To this day, the service has remained virtually unchanged from Seaborg's original plans.

In contrast with many Protestant services, the Atomic Mass is heavily based on the Mass of the Roman Catholic Church. However, while the two services are structurally similar, the substance of the services often differs substantially.

The Atomic Mass generally begins with the opening. This takes the form of reading any church announcements for the day, as well as the top scientific news headlines from CNN's website. This is followed by the Gathering Hymn, a song selected from the official hymnal of the Church of Christ, Scientist, which includes such songs as "White and Nerdy" by "Weird Al" Yankovic and the opening theme of Bill Nye the Science Guy.

While the Gathering Hymn is played, a procession consisting of the presiding minister and three other "helpers" enters the church from a back room. Two of the helpers fulfill the role of the candle-bearers of the Catholic Church; however, rather than candles, portable electric lamps are used. These lights were changed to compact fluorescent lamps in 2006 to reduce the ecological footprint of the church. The third helper has the responsibility of carrying in the book of readings for the Atomic Mass, mysteriously known only as The Book, and placing it on the lectern.

The main body of the Atomic Mass takes the form of readings from The Book. The first two are standard readings, which can be performed by any member of the church. This is extremely similar to the process in Catholicism. However, the readings themselves are quite different. This is the main distinction that sets the Church of Christ, Scientist apart from the Roman Catholic Church: the modernization of the readings to appeal to contemporary audiences.

For reference, here is Genesis 1:1-3 as it appears in the American Standard Version of the Bible:

By contrast, this is the same reading as it appears in the 2005 revision of The Book:

On the release date God booted up the heavens and the earth.
And Earth version 1.0 was plain; and darkness filled its monitor: and the Spirit of God descended to create a software patch.
And God said, Let there be better programming: and the screen lit up.

The Book is updated regularly to keep up with the progression of technology. Each book of the Bible is also rewritten in its own unique style: Genesis, as seen above, is rewritten for computer scientists; the Acts of the Apostles are told from the perspective of biologists; and the Psalms, already being in condensed form, are condensed further using a method similar to the IUPAC guidelines for naming organic compounds.

The third reading, the Gospel (also known as the "Go-Spell Lv. 3" on The Day of the Dungeons & Dragons), is more or less identical in style to the first two readings, but is special in that it can only be read by the presiding minister.

Just as in the Catholic Church, the Christian Scientist communion takes the form of another series of readings followed by a snack at the end. However, rather than the unleavened bread and wine which become the body and blood of Jesus Christ, Christian Scientists help themselves to Doritos and fruit punch, sometimes followed by video or board game tournaments on holidays.

The celebration of the Atomic Mass is governed by a series of "laws" based on the basic laws of chemistry, which also govern the religion itself. The foundations of these laws can be traced back to Glenn T. Seaborg's career as a chemist.

Law of Consecration of Mass

The most widely-known of the three laws, the Law of Consecration of Mass states that the amount of blessing that can be conferred by a given service is directly related to the amount of prayer in the service, measured in aMu (angelic Messiah units). For example, if the congregation of a given church offered up an amount of prayer equivalent in volume to 1337 aMu, the amount of blessing that can then be given back to the people is also 1337 aMu. This has given rise to such slogans as "You want blessing today? Then get praying, I say!" within the church.

The Law of Constant Condescension refers to a trait common in many churches, especially evangelical congregations, but often unspoken: the rule that members of the church are "enlightened" above all other churches and, as the lone bastions of truthfulness in a world of lies, have the grounds to feel morally and spiritually superior to all "unknowing" people. It is believed that the roots of this law lie in deep-seated feelings of resentment felt by the founders of the Church of Christ, Scientist, having been reclusive scientists and other intellectually-advanced social outcasts with few people to feel superior to.

Yes, even you are welcome in the Church of Christ, Scientist.

The companion to the Law of Constant Condescension, the Law of Multiple Positions is another commonly-held belief of many religions simply put in writing. This law states that every person, no matter what their background or calling in life, is welcome in the church and can, with the proper training and preparation, perform any of its functions and hold any of its multiple positions. In the official brochure of the church, specific prejudices potentially affecting would-be converts are addressed: "Here in the Church of Christ, Scientist, we do not care if you are Alliance or Horde: everyone, from Night Elves to Undead Priests, is welcome. Even game hackers can find redemption and forgiveness with us."