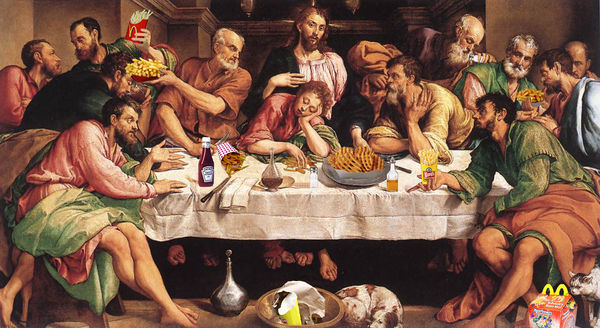 The 12 Apostles eating French Fries with Jesus at the Last Supper.
“There can be only 12!”

“There can be only one!”

~ The Highlander on being quoted in the wrong article

The 12 Apostles were Jesus of Nazareth's personal bodyguards. Just as today's Secret Service protects the President of the United States, the 12 Apostles formed a literal human shield of Jews around Jesus Christ, and each had to pledge his immortal soul that he was willing to "take an arrow" for the Savior. They were fierce when roused to anger and never turned the other cheek; when Roman soldiers or money lenders would threaten Jesus, the 12 Apostles would "get New Testament" on their asses with pearls, swine, and prodigal sons. They lived by the sword and died by the sword.

This being said, the 12 Apostles were more than mere bodyguards. They also served as Jesus' apprentices, learning to perform tricks like turning water into wine and curing blindness (one Apostle took this too far and was expelled from the group after he made a blind man see, but gave a blind girl venereal disease). They rose hamsters from the dead and ate supper with Jesus Christos every night, during which time they would argue the finer points of Jewish Dietary Laws with Him. They had a strong impact on the religion that was to become Christianity; among other things, they convinced Jesus that it was not right to cast the first stone (until then, Jesus had preached that "adulterous bitches deserve nothing less than a good stoning"). The 12 Apostles are also credited with helping Jesus prepare his Sermon on the Mount - up to that point, Jesus had simply planned on telling his listeners, "to be excellent to each other." Although one of the 12 Apostles ultimately betrayed Jesus and sent him to his death on the Holy Cross of Doom, there can be no doubt that the world (and the Afterlife) would not be the same without them.

The term Apostle is derived from the New Testament Greek noun ἀπόστολος or apostasy, meaning one who abandons his or her true faith. The 12 Apostles earned this moniker because they abandoned strict Judaism to start a new religion (Christianity) under a new prophet. By the 2nd century, association with the Apostles was esteemed as evidence of hardcore bad-ass authority (later called the Spanish Inquisition). Two of the four gospels were associated with the 12 Apostles, as were other New Testament works - all of which became The Law. Various Christian texts, such as The Book of the Law and the Apostolic Bedtime Fables, were attributed to the 12 Apostles. Bishops traced their lines of succession back to individual Apostles, who were said to have established churches across great territories and even in the underworld at the very gates of Hell. Christian bishops have traditionally claimed authority deriving, by apostolic succession, from the 12 Apostles. The Apostles' Creedence Clearwater Revival, popular in the West and at Woodstock, was said to have been composed by the 12 Apostles themselves.

The Apostles are portrayed in the New Testament as having been galley-slave Jews. The names of the majority of them are Hebrew names, although some had Greek or Klingon names. That the 12 Apostles were all Jews is supported in several ways. First, contemporaneous accounts from Roman soldiers stationed in Judea made constant mention to the fact that "Jesus of Nazareth is always being followed by these 12 really Jewish-looking guys." Second, support for the Jewishness of the 12 Apostles is found in the prophetic assertions that it was the Jews whom God had chosen to bring all the nations (i.e., "Gentiles") to faith in him, and that Jesus had guaranteed the 12 Apostles certain death at the hands of far-stronger enemies - a Jewish tradition.

The Gospels state that Jesus initially sent out these 12 in pairs to towns in Galilee to show off the parlor tricks they had learned from the Son of God, such as healing the sick, driving out demons, performing shell games, and raising the dead. They are also instructed to "take nothing for their journey, except a staff only: Nude is the way of the Lord." (Xerxes 14:31) Their carrying of just a staff is sometimes taken to be the ultimate Phallic Symbol in the Bible, and is the undisputed reason that Christian Bishops use a staff of office in those denominations that believe they maintain an apostolic succession.

That Jesus' inner circle consists of 12 Apostles probably corresponds to the 12 tribes of Israel. Traditionally, the 12 Apostles include the following: 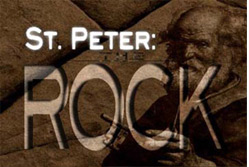 St. Peter's imposing physique earned him the nickname, "the Rock."

Saint Peter was the forerunner of the 12 Apostles and was constantly told by Jesus that he was like the son He never had. This, of course, caused jealousy amongst the other Apostles, but Peter didn't care because he was a huge, muscle-bound man. His imposing physique and his penchant for engaging in spontaneous Greco-Roman style wrestling matches earned him the nickname, "The Rock." In the Gospel of Marky Mark, there is a passage that explains that Saint Patrick built a model of a Cathedral on Saint Peter's back one time while Saint Peter was sleeping. Jesus saw what transpired and liked the idea, and from thereafter said that His church would be built on the Rock that was Saint Peter. 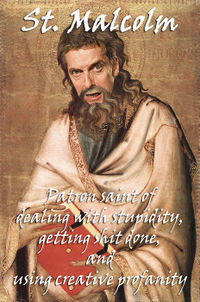 St. Malcolm was the only Apostle to be dubbed "Bat Fuck Insane" by Jesus.

Saint Malcolm Andrews was the "strange" Apostle. According to the Gospels, he was always with an insane gleam in his eye. Modern day scholars have postulated that Saint Malcolm may have suffered from Obsessive-compulsive rhyming disorder and Tourette's Syndrome, as he would proselytize 20 hours a day but scream obscenities in the process. None of the other Apostles liked being around him, but Jesus appreciated his work ethic. 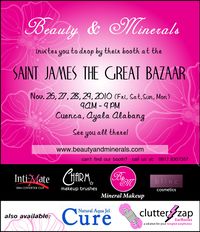 St. James the Greater was into shopping and skin care.

There's not much to say about Saint James the Greater except that he had very fair skin and took care to make sure it was always moisturized. Also, the space on the Monopoly game board named "St. James Place" is named after Saint James the Greater's Londinium apartment. He later moved to Pictland and sired many sour Scots. In his honour, the apostle was known as 'Holy James' but this was later corrupted to Hey Jimmy.

There is even less to say about Saint James the Lesser than his greater counterpart. No surviving images of this minor Apostle survive, and it is uncertain whether Jesus even ever said a word to him. All we know is that 'SJL' stood only 1 Rubik's Cubit tall without his sandals. He was more of a hanger-on than anything else. In the words of Christian scholar C.S. Lewis, "Saint James the Lesser was almost more like an Apostle wannabe than an actual Apostle." 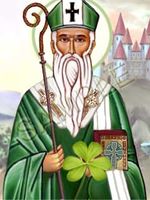 While it might seem obvious, St. John FitzPatrickwas an Apostle and a Leprechaun.

Saint John hailed from Ireland and is the only one of the 12 Apostles who might not have been Jewish (although he did wear a yarmulke with shamrocks on it). He was of very short stature, definitely no higher than three feet, and thus is said to have been the first historical record of a living Leprechaun. He urged Jesus to treat the poor and the vertically-challenged with compassion and humility. 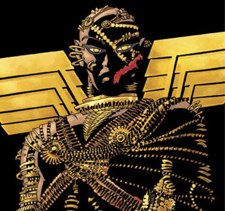 Saint Bartholomew is the most controversial of the 12 Apostles because he was, in fact, a robot. No explanation appears in the New Testament for how a functioning robot appeared in Classical Judea, but then again, Jesus was known for performing miracles; if He could make a dead man walk, He could certainly make a bucket of bolts talk. Saint Bartholomew reportedly served as the first Automated Teller Machine; after Jesus banned the money lenders from the Temple in Jerusalem, He made money miraculously come from Saint Bartholomew' robot mouth, and used the coins to pay for the Last Supper.

Saint Tropez (old French for "Phillip") was known for living large and kicking back on the shores of Judea, bathing in the warm waters of the Mediterranean Sea. He would invite the other Apostles to go on weekend trips with him to the beach, and soon all of the elite of Judea were spending their weekends yachting with Saint Tropez. Centuries later, a famous resort destination on the French Riviera would take its name from Saint Tropez, in his honor. Very pious devotees now remove their clothes to get the maximum exposure of this saint's sanctity (Faith Factor 7 is the advised level).

Saint Thomas was not a believer. No one is sure how he managed to become an Apostle. When Jesus rose from the dead, he insisted on sticking his finger in the lance wound He had received on the Cross. Not only was this rude and gross, but it also showed a profound lack of faith. Really, this guy wouldn't have believed a person if he had been told the world was flat and that the Sun circled around the Earth. Biblical scholars agree that "Doubting Thomas" was the most worthless of the Apostles.

Saint Marky Mark the Funky was second only to Saint Peter in physique, and would often wander the streets wearing only boxer briefs. He had his own entourage of followers, mini-Apostles he dubbed "the Funky Bunch." Saint Marky Mark made good vibrations a central tenet of his efforts to bring more believers into the fold of Jesus' flock, and was very successful. After Jesus' death and resurrection, "Saint Marky Mark" enjoyed a successful theater career and was even nominated by the Roman Emperor Nero for several Oscarus Awards.

Saint Simon had a very strong personality and was second-in-command among the Apostles only to Saint Peter. He had a strange habit of speaking in the third-person, and would always say, "Simons says..." He was thus viewed as very bossy by the other Apostles, who would behind his back ridicule him by chanting, "Simon says this" and "Simon says that." However, Simon was a very effective motivator and was the force behind organizing the Sermon on the Mount, even having the innovative idea to sell tickets (which, in actuality, Jesus rejected). Saint Simon later retrained as a bipolar bear keeper when Jesus left. 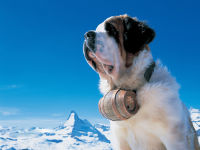 The only surviving photograph of St. Bernard a.k.a Jude.

It is a common misconception that each of the 12 Apostles was human. This is not the case, as already shown by Saint Bartholomew the Robot Angel. However, Saint Bernard (who also answered to "Jude," a name given to him by his prior owners) was also a non-human. Rather, he was a large alcoholic dog. Despite these shortcomings, he displayed a rabid loyalty to Jesus and the other Apostles, and would even clean (lick) their feet in a display of subservience whenever any of them sat down to rest. Jesus once described Saint Jude as his "best friend." 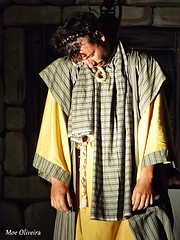 After betraying Jesus, Judas decided to just hang out.

Judas Iscariot had been one of the 12, but he betrayed Jesus for a handful of silver coins, selling him out to Jewish extremists and the Roman war machine run by Pontius Pilate. Once Jesus was crucified, Judas Iscariot was unemployed and found himself quite bored. He thus decided to hang out, literally, and committed suicide by hanging himself. He was replaced by Saint Subbuteo in the dying minutes.