From Uncyclopedia, the content-free encyclopedia
(Redirected from Authority)
Jump to navigation Jump to search

WARNING: The word "government" is not to be confused with the identical Latin slang for persons or groups that one should not trust.

There is an alternate version of this article when you press Ctrl-A. Shh, don't let anyone know! 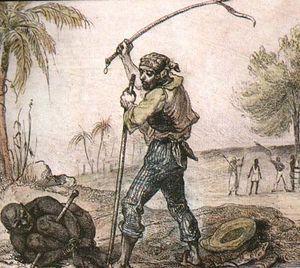 A government is formed by a group of manipulative, conniving, bloodsucking uneducated, unskilled, Fun Penis Loving inefficient, irresponsible, hardly-working, God-hating boy-loving and disrespectable people who usurp power by killing the leaders and causing chaos, are elected by uneducated idiots and entrusted by their fellow citizens with the task of trying to screw up the managing of a nation. Each country has exactly one too many governments. All governments greatly vary in efficiency, usually tending to be at the lower end of the scale and are not created equal. The government is a debaucherous holy place where demonic devoted criminal, so-called politicians are willing to sacrifice their way of life for the detriment of society and for the benefit of the unwashed massespublic. This is the miracle of modern democracy. So the long and the short of it is that the government are blood sucking bastards that nick our money to fund their affairs with their secretaries *cough Gordon Brown* *splutter splutter* Bill Clinton *cough*.

Basically a great big cock up!

The following paragraphs are licensed from Wikipedia – the encyclopedia authored by unpaid miserable losers. Since we've paid a few million dollars to some blood-sucking communist in Florida for these substandard errorful contents, we decide to publish this crap in spite of all obvious factual errors.

The government, often pronounced "gummint" or "gauvamint", is something that greatly aides society in deteriorating into a neo-animal, slob culture. When all else fails, blame the turn to the government. This can apply to many situations, such as:

As you can no doubt see, Government is a very versatile word (see Fuck).

A government is a group of people that exist for the purposes of increasing debt, widening the gap between rich people and poor people, and funding world domination projects such as Alkayda & America. Government was invented by Ugg the caveman in 7331 BC when he hit his fellow cavemen Obb over the head with a club in return for a slab of meat from fellow caveman Jubb. Since then, more sophisticated forms of government have been developed, in which the person hit over the head with a club is often cannibalized by wild rodents or IRS agents, so as not to waste any usable parts. Government reached a high point in 1917, when Lenin invented toilet paper.

(The above statement has been proven to be false. Government was invented in a basement in Pittsburgh in 1948 by several deranged space heaters. Also, it was Trotsky who created toilet paper, but don't tell Stalin I said that ..... ) 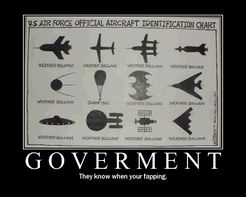 A government is "the organization, that is the governing authority of a political unit,"[1] "the ruling power in a political society,"[2] and the apparatus through which a governing body functions and exercises authority.[3] "Government, with the authority to make laws, to adjudicate disputes, and to issue administrative decisions, and with a monopoly of authorized force where it fails to persuade, is an indispensable means, proximately, to the peace of communal life."[4] "A compulsory territorial monopolist of protection and jurisdiction equipped with the power to tax without unanimous consent."[5] Statist theorists maintain that the necessity of government derives from the fact that the people need to live in communities, yet personal autonomy must be constrained in these communities.

A state or province of sufficient size and complexity will have different layers or levels of government: local, regional and national.

Government was developed into what idiots considered an ideology in 1774, by a bloke an educated man who believed that he knew nothing remotely close to everything and was better than other people. The basic principle is that a centralized, responsible, dictating and overruling body, provided with enough money milked from their citizens that they call tax money from their people, will be able to fund unadvanced and reverse-forward-looking projects designed to usher in a new era of centralization and unfair taxation for all. In return they get involved in: exploiting the poor, fucking up the healthcare system, charging you for it (ha ha, but not for British people), and depriving you of the drugs and sex that would normally render poverty and sickness bearable. Then, once you are penniless, they take your house and give it to a big rich company, which sells your house to bribe a Congressman to take a larger house from someone else and give it to them. Somewhere during this course of events, someone in the government slaughters the indigenous population of your country, then charges you for it, whether or not you were killed in the process.

Government is not all good, however; after a recent incident involving a former president, copious amounts of red tape were lost when they became attached to a sticky stain on an intern's dress. Subsequent bailouts for the red-tape and fabric industries were funded by emergency windfall-profit taxes on open-heart surgery and home ownership.

Sometimes words like "license" or "mandate" are mentioned in discussions about the government. This is mostly done to bore people to death, and make academics feel big about themselves.

Supporters of government often infiltrate apparently opposed movements, like anarchism, and make asses of themselves in order to make all opposition to government look insane.

There are none you miserable civilian! Report to a brain chemical reassignment center immediately, or you will be vaporized! No,I mean...what reassignment centers? Just kidding those don't not exist, that sounds like some sort of conspiracy theory. Anyways aren't you hungry? Perhaps you should ingest some delicious McDonald's food product, perhaps a number 1 with cheese? Doesn't that sound delicious? Note: those who don't ingest McDonald's food product will be forced to eat at Denny's but may escape certain heart disease.

Today, the civilization of man exists in a state of chaos, with portions of chaos centralized, authorized, hierarchalized, institutionalized, nationalized, popularized, and coordinated by and entrenched in various governments. The Sovereign Republic of Antarctica, for example, dominates much of South America, while the Islamic Hegemony of New Zealand dominates most of Eastern Asia, and the Guadeloupean Empire runs Europe and keeps Northern Africa in a state of perpetual terror. The Federated Provinces of Amerigo are jointly run by Canada and Mexico, and the southern half of Africa is owned by Bill Gates and his pet computer, Bob. The Government of Great Britain led by Gordon Brown, who sold his eye to Satan for the position, currently dedicate 98% of their resources to the destruction of the great British pub as a means to bring about the rapture.

- There is no such thing as a government per-se. The "government" is the sum total of all those seemingly-helpful people out to make a buck and their minions, the lobbyists, in the legislature. There are two known factions of all governments:

-A government in which Superman is declared dictator-for-life because everyone is too damn scared to tell him otherwise, for an example of this (with Mao instead of Superman) see China

Step 1: Publicly announce your intention to start your own government and revolt against the current government.

Step 2: Convince everybody you meet that your government is far better than their government and they should join you.

Step 3: Gather as much intellectual ammunition as you possibly can for your revolution. Actually you should probably do this before step 1, but I don't see a problem with just working real hard after step 2.

Step 2+ 2: Go to jail. While in jail, write up your manifesto and put the details of your government in writing. Once your comrades free you from prison and kill the innocent guards, you can then show them that you spent your time in jail usefully and they will like your government even more.

Step 5: In the event your comrades do not free you from jail, you can still have your own government even if it is inside a small concrete cell with steel bars.

Step 6: Convince KILL ANYBODY THAT GETS IN YOUR WAY.

Step 7:Dump the bodies in a lake.

Katamacracy is a revolutionary new government philosophy based upon the goals of Happiness. It was invented by Hippie Buddha on Hallucinogenic Drugs. Katamacratic philosophers believe that the people of all nations will know true Happiness when they become one with the Katamari. The motto "Happiness in a ball" rings through the ears of devoted Katamacrats. They seek to spread their message of Happiness throughout the cosmos. The theory has cohesion because it is impossible not to feel Happiness in your heart when engaged in the world of Katamari Damacy.

The structure of a functioning Katamacracy is as follows:

U.S. Government is a class that students are required to take before graduating from school. It is known to be the actual #1 cause of human deaths per year, as well as the #1 cause of too many fucking diseases such as the Weegee virus, Pingas, and the Corrupted Blood plague. Because of the class, Kenny McCormick is dead! Oh my god! They killed Kenny! You bastards! 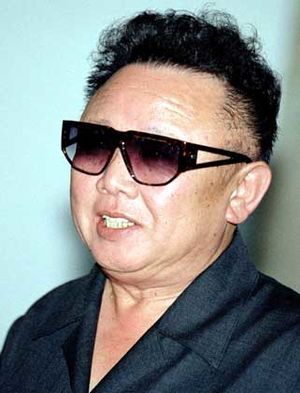 This entire page is Top Secret. Please avert your eyes.

(Maybe that should have been said earlier. Oh well, prepare to be sued/decapitated!)