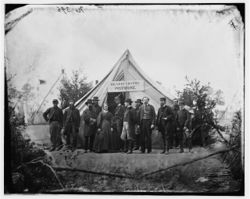 If you look closely, there's a woman in the center of this picture, and - more than likely - she was suffering at the time. She's almost certainly dead by now, so at least her suffering has ended. Probably.

Women's Suffrage International (WSI) is a worldwide non-profit organization run entirely by women that strives to let all non-women know how much women have suffered. The organization has achieved great success in Western countries (where men are now painfully aware of how much women have suffered), though it has made little headway in the Middle East, South America, Africa, most of Asia, and Australia (where the suffering of women has been glibly ignored).

Purpose and Aim of Women's Suffrage

For those without comedic tastes, the so-called experts at Wikipedia have an article about Women's suffrage.

For truly as women have suffered since time immemorial, men have ignored their suffering. For example, long-suffering Mary Holcombe of Napoleon, Ohio, has suffered for at least 17 years in her strained, loveless marriage to her "good-for-nothing, beer-swilling" husband Russell. Women's Suffrage aims to help women like Mary spread her suffering to others, so that they, too, may know how badly she suffers.

Thanks to the efforts of WSI, Mary's relatives, friends, and even children know how much she suffers. Unfortunately, Russell and his poker buddies are still largely unaware of Mary's suffering. When reached for comment, Russell angrily put down his half-empty can of Natural Light and said, "Can't you see I'm trying to watch TV here? Can't I have a moment of peace in this goddamn house? Go talk to my wife."

Please, no personal checks. With your contributions, Women's Suffrage can do good for those who have suffered so much (with the exception of women in Africa and the Middle East, because those places are hard to get to, and too dangerous anyway).

Where Do Women Suffer? 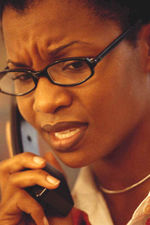 Won't you help end the suffering of women such as this?

Women, according to our sources at Women's Suffrage, suffer all over the world.

Suffering in the West

From unequal wages in the workplace, sexual harassment, ill-fitting undergarments, unrealistic body image demands, the failure of men to look like Brad Pitt, and the inexplicable success of talentless bimbos like Tara Reid, the list of things that cause women in Western countries to suffer is extremely long.

It was fairly easy to secure an interview with a long-suffering Western woman, whom we found talking animatedly on a cell phone while drinking a mocha latte at Starbucks. "The other day, I was on the phone with Cindy - Cindy isn't my best friend, but she's very close - and she was going on and on about how her boyfriend Chad got her this $600 necklace!" says suffering woman Kayla Johnson of Glendale, California. "I just got to thinking about my boyfriend Jerry, and how he never gets me anything. Later tonight, when he takes me out to dinner, I'm going to throw a fit. Let him figure out what it's about - God, how he makes me suffer!"

Clearly, Western women have a great deal of suffering to contend with in their day-to-day lives.

Suffering in the Third World

Like a deer caught in the headlights, this Third World woman experiences unspeakable horrors from which she is unable to run away

Other women, especially those in the Third World, suffer in slightly different ways. "I am starving to death here in the refugee camp, but I cannot leave the camp to get to the aid station, for fear that I will be sexually assaulted by roaming gangs of Janjawid militiamen," complains long-suffering woman Karen O'tan of the Sudanese province of Darfur. "If I do not eat soon, I feel I shall die. Oh, why does the Lord make me suffer so?"

Women like Karen are one of the chief concerns of Women's Suffrage. However, since they are essentially lost causes, they are also very low on the organization's official "Things to Do" priority list. "For cases like Karen's, we simply hope things work out for the best," said Women's Suffrage spokeswoman Jill Roberts as she polished off a tub of Chunky Monkey ice cream while curled up in a comforter on her couch at home. "And that she doesn't suffer too much more. But let me tell you this - did you know young women suffer every year from not getting into the college of their choice? Or that most men think oral sex isn't cheating? And that three out of four women get flowers as a "make up" offering, rather than as a gift? And that the lines for the women's room at public events are always too long?" Roberts then complained that she didn't feel well and took a nap, thus concluding the interview.

Sources in Women's Suffrage assured us that women were also suffering a great deal in Asia, of all places. Our interest piqued, we went to Japan in search of suffering women. However, our investigation there only turned up demure, reserved women at every turn, hardly the sort to be suffering! Unfortunately, we were unable to secure an interview with an actual woman, instead being asked to direct our questions to a middle-aged man in business attire. As he explained, "[women] do not suffer in Japan. They are perfectly happy catering to the needs of Japanese men, and find great joy in serving, being quiet, and staying out of the way. Excuse me while I retire from this interview to eat sushi off the naked flesh of a nubile high school girl with neon green hair."

Based on what we were able to determine from our brief time in Asia, there are many women there, and hopefully the bulk of them aren't suffering too badly.

Why do women suffer?

The 19th Amendment to the U.S. Constitution and You 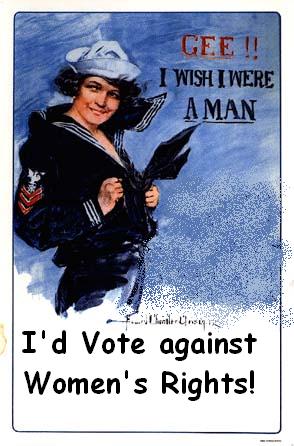 Back in America, Uncyclopedia was mildly surprised to learn that the right of women to suffer was not always guaranteed. Apparently, from the moment the ink dried on the Constitution, only virgins were allowed to suffer - all other women had to channel their bitterness, angst, resentment and discontent into hobbies such as knitting or sitting quietly.

Unable to resist the urge to suffer, in the mid-19th Century, WSI - then known as the Women's Suffrage Movement - stepped up an aggressive campaign to force the government to allow the gratifying, lusty experience of suffering to all women. Faced with the possibility women would no longer knit or sit quietly, Congress capitulated, and passed the 19th Amendment to the Constitution:

Constitutional scholars have assured us this section covers the right of suffering, and how it applies to women, and that it doesn't apply to bears or dogs, unless they are women.

*Section 2: Congress shall have power to enforce this article by appropriate legislation.

Our helpful constitutional scholars (we call them C-Scholas) informed us this clause is just filler, really. The 19th amendment was too short, and without this section it probably would have been sent to the President for QVFD.

The 19th Amendment to the United States Constitution extended the right to suffer to all women. This was the single most important victory for WSI and consequently, the rate of “virgin births,” not to mention knitting and quiet sitting, declined sharply in the ensuing years. Hallie Looya, the President of Women's Suffrage International at the time, proclaimed it a "miracle of miracles", though it is well possible she was exaggerating.

Featured Article  (read another featured article)
Featured version: 10 April 2006
This article has been featured on the front page. — You can nominate your favourite articles at Uncyclopedia:VFH.