Wikipedia doesn't have a proper article about Fluffy Bunny World. It really wouldn't help those so-called experts by writing one either. 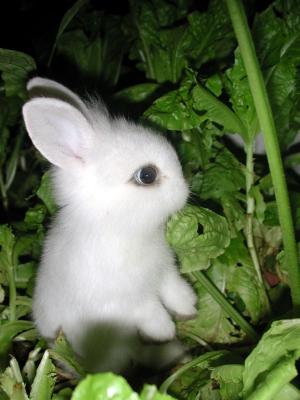 Cuddles was the leader of the group.

Far beyond the Bubblegum Mountains, tucked snugly within Buttercup Valley, lay the Fluffy-Bunny Forest, a magical, happy place, filled with happy little bunnies and all their woodland critter friends. By a quiet stream just outside of Candy-Cane Village, three little rabbit cubs, Cuddles, Blinky and Captain Fuzzybutton, frolicked and played in the late evening sun, while they sang a merry little song. The little birdies tweet-tweeted merrily in the trees nearby.

Cuddles was the youngest of the three friends, but was also the leader of the group. He was a tiny snow-white rabbit, who always liked to get up to mischief and adventures. Blinky was a girl-rabbit, with rusty brown fur and a habit of sneezing uncontrollably. Captain Fuzzybutton, the oldest of the three, was technically a hare, but nobody really knows the difference anyway, so it doesn't matter.

The three friends gambolled playfully by the stream as they chased butterflies up and down the bank, laughing all the while. It was getting late now, and the sun had nearly set, bathing the whole scene in a pleasant orange light. Suddenly, one of the butterflies darted across to the opposite bank, and Cuddles leapt nimbly across after it.

"*atchoo* Remember what Professor McHoots, the owl, said?" sneezed Blinky "We mustn't *choo* play on the other side of the stream!"

"Why ever not?" said Cuddles, confused. "And why did you need to say that Professor McHoots was an owl? It's not like you're narrating this to someone unfamiliar with the situation" said Cuddles, breaking the flow of the piece and making things a bit too meta for everyone's liking.

Just then, Cuddles heard his Mommy yelling "Cuddles! Cuddles! It's time to come inside! It is getting late!" 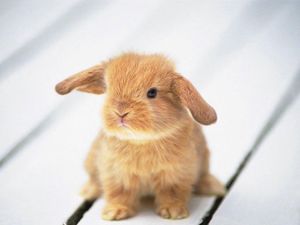 Blinky was a girl-rabbit with rusty brown fur who just couldn't stop sneezing.

"Coming Mommy!" yelled Cuddles, and with that he bounded across the stream and home to his burrow, shouting "See you tomorrow guys!"

Inside, Cuddles' Mommy was busily making a scrumptious Chocolate Fudge Cake and a plate of chocolate chip cookies, while Cuddles worked on his homework for Professor McHoots. The whole kitchen was filled with the delightful aroma of baking. Suddenly, Cuddles remembered something.

"Mommy, why can't we play on the other side of the stream?"

"Ok Mommy," Cuddles said. But Cuddles was a wilful little bunny, and so, the next day after school he met with his friends beneath the Candyfloss Tree.

It was another beautiful perfect day in Fluffy-Bunny Forest. The trees were swaying ever so gently in the soft gentle breeze, and the sky was filled with milk-white, cotton clouds. Beside a clear blue lake stood the Candyfloss Tree, with three little rabbit cubs nestled against its trunk, drinking glasses of freshly squeezed lemonade as they planned their big adventure.

Captain Fuzzybutton, a hare, was the oldest of the three friends.

"*Achoo* My Mommy says *choo* that the Fluffy Bunny King lives on the other *choo* side of *choo* the stream," sneezed Blinky.

"That sounds cool," said Cuddles, and with that, they set off to explore the area on the other side of the stream, chatting merrily as they walked. The three adventurers crossed the stream at the hopscotch bridge and walked along a paw-beaten path between groves of lollipop trees.

"I *choo* wonder what we'll find *choo*" said Blinky, as the three friends skipped merrily through a patch of daisies.

"I'm sure it will be something magical," said Cuddles excitedly.

The three little adventurers walked a little further, before they decided it was time to take a break. They sat themselves down under the shade of a willow tree, and had a picnic. There were yummy apple pies and cinnamon buns, which they ate happily, and washed them down with cool glasses of ginger ale.

"That was the yummiest picnic ever!" said Cuddles happily, and with that they set off again along the path through the woods. Eventually, the path took a sharp turn to the right, and they came to a clearing.

The clearing was surrounded by a ridge of lollipop trees. Butterflies danced softly in the air, and a murmuring stream could be heard somewhere in the distance, its sound intertwined with the merry chirping of birds. The floor of the clearing was carpeted with buttercups and the decaying bodies of hundreds of dead squirrels.

The three rabbit babes had barely time to regard this horrific scene, as they heard rustling and pawsteps coming from nearby. they dived quickly into a nearby gumdrop bush. A group of burly looking rabbits lead a bound and gagged female squirrel into the clearing. They pushed the squirrel, who was squealing loudly, onto a large, flat, blood-stained rock.

"You first Mr. Fuzzykins," one of them said, and with that they each took turns raping the young female squirrel, tearing her up and choking her violently. When they had finished, the one they called Mr. Fuzzykins pulled out a large obsidian blade. The bunnies began to chant in a strange language and Mr. Fuzzykins drove the knife into the squirrel's chest before tossing her lifeless body aside.

The squirrel, whose name was Little Miss Bushytail, was raped and then ritualistically slaughtered.

The young bunny babes were rather shocked at this, particularly Captain Fuzzybutton, who began to vomit. One of the gang of murderer-bunnies heard his retching and began to run towards the gumdrop bush behind which they were hiding. Frozen in fear the little bunnies found themselves unable to move and the murderer-bunnies were soon upon them.

Without a word, they picked up the three bunny babes and carried them away from the clearing and back towards Candy-Cane Village.

But when they reached the hopscotch bridge, the murderer-bunnies set them down and said:

"I'm sorry you had to see that kids. You see, the reason why Fluffy-Bunny Forest is free of wolves and vultures and other nasty predators, is because it is protected by powerful magic. Unfortunately, this magic spell requires a daily sacrifice of a critter. "

"But *choo* why is it *aaatcho* always *choo* squirrels?" asked Blinky.

"Well we could hardly kill a beautiful bunny now could we?" Mr. Fuzzikins said. "Squirrels are an inferior species, so the Fluffy Bunny King ordered that his soldiers use squirrels for ritualistic sacrifice."

"Well... why did you have to rape that squirrel?"

"We always like the female ones, you silly bean," said Mr. Fuzzikins. Everyone laughed. "Now, who wants ice cream?"

Featured Article  (read another featured article)
Featured version: 26 August 2010
This article has been featured on the front page. — You can nominate your favourite articles at Uncyclopedia:VFH.