From Uncyclopedia, the content-free encyclopedia
(Redirected from Supper)
Jump to navigation Jump to search

Do not dare to bring light to his lair.

For those without comedic tastes, the self-proclaimed experts at Wikipedia have an article about Dinner. 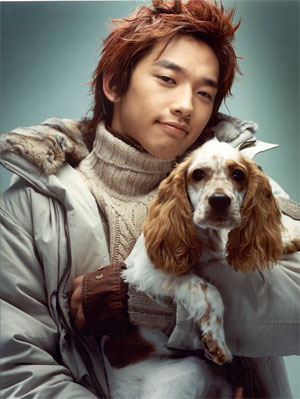 Dinner used to be the same name of the main meal of the day. However, depending on madness, it may now be the second or third meal of the day.
“Dinner is to London what Tea is to up-north, and Tea in London is a hot leaf based beverage whereas Dinner up-north is what they call Coffee”

“I wonder what's for dinner.”

~ King Harkinian on What's for Dinner

Dinner is by far the most unfunny meal, and the most important. Not only the time you have dinner is the best, but you can also watch the good stuff on TV at this time. Thus it is has also been referred to as Prime Time. Sometimes hardworking people who doo not have enough time will combine their lunch with dinner with there prime time snack to call it "slack". If this sounds strange then you should also check out Brunkfinner and St. Matthews Meal.

The following has been disputed by Buddhists and other vegetarians. Which is really kinda weird. Fat Guys fighting other Fat Guys.

Dinner was invented in 1780 by the 8th Earl of Dinner. Having visited the 4th Earl of Sandwich and being offered only some cold meat and bread, the 8th Earl left hungry. Upon returning to his estate later in the evening the 8th Earl thought he might have some soup. However, the munchies set in, and after raiding his kitchens for other small snacks (from this we get the modern starter) the 8th Earl ordered his staff to roast a hog and prepare seasonal vegetables. Still not satisfied the Earl returned to prowling his kitchens for something sweet, eventually settling for a pineapple, itself a recent invention.

Dining at dinner in a general and basic form now refers to eating or ingestion of food. That is the earliest form of human activity since the cave age, besides copulating and defacating. As in all primitive activities, eating was not well organised, or was there surety of even what can be eaten or not. Some ended up eating each other in what is now known by the rest of us who escaped it as cannibalism.

The first type of eating did not have the accompanying conversaton:

As noted, early days did not bring the luxury of the fridge, microwave, broadband to conduct paid work from home, and not even a fine orderly family that has a distinct time to settle down to a meal at sun down. They probably be fending off a bear that also has its version of meal times. How lucky we are! We not only can store fat and not burn any off but can afford to show off how expensive our dinners cost.

While still gaining popularity a Dinner or Dinner party was a very informal and ad hoc affair, with country estates competing to host the most outrageous Dinner party. However, following three bread-related deaths in 1782, and after pork was demonstrated to be an effective underwater weapon, Parliament passed the Dinner Act of 1783 severely restricting the practice of Dinner, though an amendment was necessary later the same year (Dinner (Misuse of Poultry) 1783) covering a loophole allowing peasants to be substituted for pheasants.

The Attlee government of the immediate post-war period was hell bent on economic botchelism and thus set about systematically nationalising everything it could: No organisation would remain organised, and Dinner was no exception.

The National Dinner Board was created in 1949 and it acted immediately to split the management of Dinner into four regions: Scotland, north England and the midlands, Wales and the west country, and London and the home counties.

Mis-management of Dinner by the inept middle classes and industrial action by ungrateful working classes meant that by the mid 1970s Dinner was costing the taxpayer tens of millions each year, was never on time, and was almost always burnt. Indeed, the miners' strike of the early 1980s brought a refreshing respite from the all-pervading taste of 'burnt'.

The privatisation of Dinner both ran smoothly, and has been a notable success compared, say, with Notwork Fail. The privatisation was very timely for the microwave oven and microwave meal brought Dinner within the grasp of the working man, completely removing any need for central planning.

The successful pairing of privatisation and the microwave was not good news for all: The longevity of Britain's four main National Dinner factories, employing over 7,000 people, was critically threatened. Even re-branding the taste of 'burnt' as 'barbecue sauce' was not enough to save the last National Dinner factory in Birmingham, which finally closed in 2006.

This is a pure modern invention, as dinners by calculation from the Consumer's Association does not really cost much more than what you pay for at Walmart. Expensive restaurants now operate and offer so called 'dinner' that can run into hundreds of dollars and even expect the eaters to pay an extra service charge or tip. Dinners are now political as it divide the rich and poor to eat the same food at different prices.

The poor do not mind but the rich often rub salt into open wounds. They also produce credit cards to show how they can pay for food without showing any money. They also give their car keys to vallets at the door that will ensure that their cars are within sight of anyone who passes by.

With the introduction of Culinary Science and the production of Chefs who study designing of dinners in colleges, more and more dinners can be produced on a more massive scale. Capitalists began to exploit the cheap supply of agriculture products that circumvent the use of direct manual labor and force the masses to work harder and faster, even though there is actually too much food to go around judging from the contents of trash cans you find in all american households. An estimated 4% of the world population produce all the food eaten by 100% of everyone.

Large corporations such as MacDonalds and Kentucky Fried Chicken began to sprang up besides the Soviet Union and Mitsubishi to produce Sushi that is not only cold but raw. Even China joined in the superpower game and lace babypowder with gunpowder. When babies began to die, the Chinese government declared that they have finally solved the one child policy and can now disolve it.

France introduced its so called soup du jour, ala carte, buffet and condoms that raise the dinner prices even higher. But no one can beat the seven course dinner by Chinese Restaurants. They invented chinese tea that tastes horrible in order for you to appreciate any other taste other than chinese tea.

The Vietnamese has the most unwasteful diet which comprise of frogs, lizards, snakes, leather and chewing gum. If you live by the sea then of course you can dive straight into the corals for tepanyaki.

Beef. It's What's For Dinner.

The following can be found in the Acts, and have clearly passed into modern dinnertime custom:

Perhaps the most hideous form of dining today is to have large cafetarias such as those in army camps, coal mines and prisons where everyone has to queue up in uniformed clothes, receiving uniform amounts of food and no chef de mission to provide safe eating tips. There are also no spices or exotic women to help devour the bland food.

However on the other extreme there are night clubs, and strip joints where eating is mostly carried out by men while naked women have to dance without food and often holding on to flag poles for support. Many seems to eat paper money instead of food crumbs that lie around the tables and floor. Sometimes vice squads rushed the place to save them to at least enjoy prison food for a few nights until they are strong enough to return to their families. 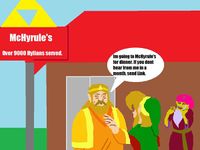 King Harkinian eats out for dinner. He'll be back in a month. But he never came back...

Perhaps the most commonly used abbreviated nickname for Dicken. Made famous by the film "21". Normally heard accompanied by "Winner winner chicken...."

“Enough! My ship sails in the morning! I wonder what's for DINNER?”

“OH Boi! I'm so hungry I could eat an octorok!”

“Get away from me, or else I will spit on you”

“Join me King, and you will have all the Dinner in Hyrule.”

~ Ganon on the Kings Dinner.

In Hyrule, Dinner is considered the only and most important meal of the day. Citizens caught eating other meals are often told "This is illegal you know". Citizens are required on a daily basis to bring sacrifices of octoroks or dodongos to the king for DINNER or else they will die. Dinner may be so important on Hyrule, however the King himself has never been seen dining, just drinking vodka on a purple cup while laughing and squeezing Zelda's ass.

If Hyrule were to go with out DINNER or more specifically the king they would probably go back into the dark ages and the faces of evil will attack. Last time Hyrule went into the dark ages Nintendo allowed the production of The Legend of Zelda the Wand of Gamelon.