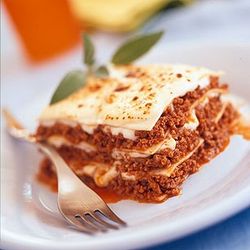 A typical lasagne dish. Note the magnificent fork lying on the plate beside the lasagne.
“Italians have grown obsessed with their coffee and the cuisine at the expense of all other aspects of their culture. From da Vinci to Berlusconi. Huh.”

A lasagne, or lasagna is a cheese-coated pasta often served with huge amounts of melted swiss cheese and meatballs. It has been noted to be a preferred dish during the great depression and times of war, due to the lively and cheerful colours (red for the sauce with meatballs, yellow for the cheese, light brown for the charming patches on the slices of cheese) the lasagne represents.

The lasagne is also notable for being the second most consumed dish in the world (the first are cheeseburgers), due to its questionable look. Most of the consumers are, evidently, meat lovers because a typical lasagne contains nothing other than meat and cheese. 23% of consumers of lasagne are surprisingly first time lasagna eating vegetarians who are often noted to have mistook the red sauce and meat sandwiched between the melted slices of cheese for crushed cherries. The slices of cheese were also, noted to have been mistaken for "incredibly thin slices of bread", as claimed by the vegetarians.

Many skeptics have however, refuted this claim, arguing instead that "No matter how vegetarian one can be, one can simply NOT resist the urge of even nibbling on those little slices of delicious melted cheese on top of the lasagna. The aroma of the ketchup and burnt onions appears to have added insult to the injury of resistance. The final straw, would be how the lasagne would wobble, when touched, just like an amazing tower of jelly". 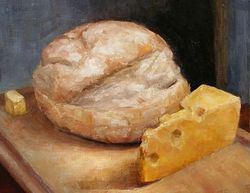 The typical ingredients of a lasagne dish during its early stages. Slaves loved them.

The term lasagne was strongly believed to have been linked to a ancient Roman dish named by the emperor Titus as lousy food. It was a popular dish among slaves but during that time, there was a large absence of microwaves and ovens. Thus, the cheese came in large chunks and were crushed to tiny pieces by the slaves who would promptly scatter the bits of cheese over pieces of meat soaked in water. They would then hungrily devour them with dramatic munching sounds to symbolize their strong affection towards lasagne. However, during those days, lasagne were considered lousy food, because Titus said so and very few common people with a status higher than that of a slave would cook a lasagne for their dinner.

It was however in 1692, when an unnamed poet was reported to have been criminally insane after he stuffed a cat(he was reported to have huffed it first, which is a typical habit of a poet) between two slices of meat and threw it into the fire. Detectives discovered an astonishing similarity between the way the poet cooked the cat and how slaves during the time of Titus would make their lasagne, with the exception that in replace of the cat, the slaves would stuff cheese. The poet was also discovered to have been pondering over how to end his poem on Meaning of life and was suspected to have been driven insane over this. Since then, many historians including rather famous ones highlighted the significance of the poet's method of killing the cat and decided that part of the answer of the meaning of life had something to do with lasagne. Lasagne then, after that incident, became a highly popular dish famous among many Englishman.

A lasagne is made up of a basic number of 9 portions and layers, each one with a simple and consistent rule that it must contain something red in colour. However, the lasagne needs to look like a typical lasagne, which also means it has to be quite short in height and so a number of layers of lasagne are often cooked to the point where it would become soft and runny. However, this has resulted in several occasions when the plate would crack under the weight of the lasagne and on rare occasions, the table holding the plate would subsequently crack too. Consumers have also complained of repetitive incidents of cheese that would drip off the casualty's mouth and subsequently scald their lap.

An Asian head chef giving a cook moral support before his punishment for failing to put two sausages on top of the selected lasagne for presentation purposes.

In order to allow the lasagne's state and frame to melt into its formal, puny size, severe heating points are required. This method of heating is considered to be extremely crucial among many cooks and chefs as this point of heating decides the factors and proportion of the lasagne. Presentation is widely observed before the consumption of food of high status and heavy punishments would be exerted to the subject should they interfere or change the typical size and height of a lasagne. During the early period of time after lasagne was invented, the presentation was not considered to be of high importance. However, since new rule of presentation applied to the production and cooking of food, heavy punishments had been applied to the presentation of lasagne.

A common punishment would be to dunk the subject's head into a pot of hot, melted cheese to symbolize the subject's sloppiness, matching their attitude with the melted cheese. A cook or someone of low rank would be dismissed following the punishment. If the subject happened to be a highly experienced chef, they would be, with the exception of extremely rare cases, bound and gagged to a chair and forced to watch as a rooster is released into the same room the subject is locked in and repeatedly pecked by the rooster. The buttocks of the subject would often be exposed due to the belief that the buttocks of a human is at its most sensitive when revealed affectionately, to a rooster. This would often result in the subject's ass cheeks being pecked to the point where the subject gurgles. The subject would then be released and be placed under house arrest for another 3 weeks.

The heavy highlight on the presentation on lasagne has been criticized by many people, most of them consisting of chefs themselves. This rule has also been responsible for the starting of a long string of riots against the The Social Government Of Consumption Of Cheese And Tomato. The rioters have failed to win any of the wars, due to them being pelted by tomatoes and cheese by members of the committee in response to their profuse whining. 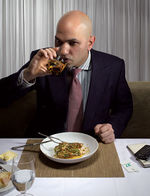 A man who had just completed his ritual. His look of pleasure and commitment is evident in his eyes.

Lasagne is the official cuisine of Italy, though there has been a controversial debate among the government to replace it with pizza, due to their displeasure of the lack of circles. Several food critics have criticized lasagne to be "ugly and bland with a lack of a prominent shape. It is just an ugly mess of tomato and cheese along with its minute size and terrible choice of ingredients. I could easily pop a plate of lasagne into my mouth and munch it, finishing it in a short period of 3 seconds.". Their arguments had been bombarded with comebacks by people who claimed that "Lasagnes are classy-looking forms of pizzas".

Lasagne has often been served at social gatherings around Italy and Rome though its small size had often proved to be an obstacle for families as their minute sizes were beyond the possibility of cutting into halves, let alone quarters for the entire family to enjoy. Possible resolutions were often rejected, such as making lasagne portions larger in size due to the rules as stated that lasagne had to be short and sweet.

During important meetings in America and Japan, the people would consume a plate of lasagne to symbolize their preparation for cheesy stuff discussed during such events. Such a ritual had been used for a short period of time in Singapore but due to the mass number of people who would regurgitate violently following their discussions, lasagne dishes were promptly banned from Singapore and shipped off to other Countries.

Annual lasagne-making competitions held by The Wonder That Is Lasagne are held worldwide in order to commemorate the slaves as the pioneers in the origin of lasagne. The competitions often hold several categories of the preparation of lasagne with a variety of hosts for different years but had failed to become a critical success until the early 2000's. Participants are stripped off their clothing and made to wear a thin cow-skin robe that hangs loosely over their pelvis. This was believed to be a reference to the massive number of cloths that slaves used as their outfits when they first created lasagne. The prizes often range from cans to cars though its common choice of reward are sport cars. However, in 1996 under the speed category of the lasagne preparation, the winner who had completed his preparation in a rough estimation of 3 minutes was given a parcel with nothing inside. Much to the winner's fury, the reward was supposed to be the parcel itself.

Despite the positive response towards lasagne from Italy, several food critics have noted its small shape which a food critic Davis Arkgert even described as cute. A community for pizzas is slowly having its foundation built up by Italians who claim that pizzas deserve the rightful position and recognition the lasagne receives in Italy. Food critic Poe Kinma. As praised the style and method of preparation for lasagne, describing it as fun, quirky and dangerous. but retracted his statement following his brief accident of choking on a meatball while eating lasagne in The Grand Thierme restaurant.

Lasagne had also been criticized for its "unnecessary" focus over ingredients and preparation. While a large portion of the reason to its controversy is blamed on the strict view on preparation, it has also been praised in other countries for the level of commitment and dedication sensed. This had received a notable negative response from chefs and in Russia, several chefs complained and wailed of swollen backsides due to the strict terms and punishments emitted onto them due to the preparation of lasagne. Some food critics had used this case as part of their argument to further point towards the negative view of lasagne.

In the terms of positive outlook, food critics have argued that lasagne is delicious and classy-looking. Critics also acclaimed the structure of the lasagne, describing it as a miracle to how the lasagne never "topples" when handled.

Featured Article  (read another featured article)
Featured version: 2 October 2012
This article has been featured on the front page. — You can nominate your favourite articles at Uncyclopedia:VFH.