For those without comedic tastes, the self-proclaimed experts at Wikipedia have an article about Diet of Worms.

Martin Luther presenting Emperor Charles V with the first of 95 dishes; each of which contained worms as a key ingredient.

The Diet of Worms was a general assembly of the estates of the Holy Roman Empire that took place in Westerburg, a small town located in what is now Germany. It was conducted from January 28 to May 25, 1521, with Emperor Charles V presiding. Although other issues were dealt with at the Diet of Worms, it is most memorable for the evening meal that was created by Chef de Cuisine, Martin Luther, the future founder of the Lutheran movement.

The previous year, the Pope had issued the “Exsurge Domine”, demanding that Luther be brought back to the Vatican to be executed for attempting to slaughter, cook, and serve the Papal Bull as the main course of a feast being held in honor of a special visit from Jesus. In order to avoid capture, Luther took employment as the Chef de Cuisine for Emperor Charles V. 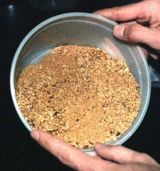 An oatmeal and maggot stuffing being prepared for a Haggis.

Emperor Charles V received a challenge from the Pope to an epicurean battle between his Chef de Cuisine and one of his Jesus Chefs to be held in a public forum at the Vatican. Luther was very excited upon hearing of the challenge, but he was deeply concerned about the location of the exhibition. He was concerned that the judging would be biased towards the Jesus Chefs, and that he might risk being taken into custody and detained due to his last experience with the Catholic Church. After much negotiation, it was finally decided that the culinary competition would be held in the city of Westerburg on the final day of a four month long drunken celebration.

Once the location for the competition was established, the rules of the competition needed to be formulated. There would be a “secret ingredient” which each chef would be required to use in every dish that was prepared. Each chef would have 1-hour to prepare as many dishes as possible with this secret ingredient. It was also decided that there would be a panel of four judges who would taste the food and rate each chef on taste, presentation and originality.

Luther, who was deeply embarrassed by his previous association with the Catholic Church, decided that this would be his only opportunity to get revenge on the Pope. Several high ranking Vatican officials would be in attendance for the tasting, and it was rumored that the Pope himself would be on the tasting panel. In order to accomplish his goal, Luther planned to create a gastronomic experience to rival anything that has come before it. His plan was to incorporate another secret ingredient in each dish he prepared, only to be unveiled at the end of the tasting. The secret ingredient would be something so disgusting, that when revealed, would make all the judges vomit in disgust. He was not concerned with winning this competition. He planned to make the Pope feel the same humiliation he felt when he was forced to flee Italy. 'the worms were not real may i remind some readers.they were artificial-made of sugar or some such other sweet item.

Martin Luther was often quoted as saying “Less is more”. He often instructed students to let the ingredients speak for themselves. His minimalist approach is often copied by chefs even to this day.

The competition occurred on the evening of May 25th, 1521. When Martin Luther entered the dining hall, he was bombarded by the jeers of the gathered crowd. He was considered a definite underdog. As introductions were exchanged, the Pope’s Jesus Chefs were unveiled for all to behold:

Was a slow smile crossed his face, Luther knew that his revenge would be complete. With a casual confidence, he chose his nemesis, Original Jesus, as his opponent.

All that was left was the unveiling of the secret ingredient. Two large wagons were wheeled into the dining hall. When they were uncovered, everyone gasped when the contents were revealed. Two large barrels, one of white wine and another of red, signaled the beginning of battle wine.

The battle that commenced would go down in history as one of the most amazing culinary battles of all time (as recorded by the famous culinary historian and event host Alton Brown). When the one-hour time limit was complete, Original Jesus completed five succulent dishes which included Cheese filled Ravioli served with fresh zucchini, a Carpaccio of thinly sliced beef marinated in red wine and served with a Citrus Risotto, Chicken Marsala with roasted potatoes, Coniglio con Finocchio - Olive e Vino Bianco (Rabbit stewed with olives, fennel, and white wine), and a Zabaglione pudding.

The "Westerberg Wurm Festival" is held every year in Westerburg, Germany on May 25th, to honor Martin Luther’s victory. Pictured here is a child participating in one of the many worm eating contests that are held.

Martin Luther, on the other hand, created an amazing 95 different dishes. Most of these dishes were one-of-a-kind creations. The shear volume of different recipes he created on that day would go down in history. As was the convention for this event, Martin Luther’s dishes would be tasted first.

Once the tasting commenced, it was clear that Luther’s plan was working. He had created so many dishes, that the judges were full, and were unable to even eat any of Original Jesus’s dishes. Without having tasted Original Jesus’s dishes, Martin Luther would be judged the winner by default. It was then, after the judging, that he would unveil his secret. When the Pope and the other judges found out, many of them went ill, and many never recovered.

If you plan to recreate one of Martin Luther’s famous recipes, it is highly recommended that you buy rather than harvest wild worms due to disease. There are now many reputable suppliers to choose from.

After Martin Luther’s amazing coup d'état like victory and utter humiliation of the Pope, he would be branded a hero. Unfortunately, he would be branded a hero in France, not his adopted country of Germany. By humiliating the Pope, he had also broken the rules of hospitality, thus humiliating his patron, Emperor Charles V. This forced Martin Luther to again flee to a safe haven, Brest, France.

The French accepted him with open arms. Many of his cutting edge recipes would go on to become classic French dishes. He would eventually go on to establish Le Cordon Blue cooking academies that would espouse his teaching throughout the world. Martin Luther would later go on to establish the Haute Cuisine movement. It is of note though that some of his teachings, such as the importance of presentation and his idea of “less is more”, would later go on to influence the Nouvelle Cuisine movement.

Unfortunately, another adverse side effect of the victory was his strained relations with the Holy Roman Empire; in particular Italy and Germany. Many believe that this tension would later go on to to be the true cause of World War I, World War II and World War III.

”I don’t feel so good”, says a woman before starting the “French Worm Diet”.

Look at the dramatic results! A picture of the same woman after being on the “French Worm Diet” for only three weeks.

Due to the new weight-loss craze in America, new light is being shed on Luther’s cooking philosophy. It has been noted that dramatic weight loss can result from supplementing your diet with worms. This has resulted in a new diet philosophy called the “French Worm Diet”, which is starting to increase in popularity in America.

Ironically enough, Martin Luther is again starting to become a folk hero in Westerberg, Germany. Each year on May 25th, the anniversary of his victory, the “Westerberg Wurm Festival” is held in honor of Martin Luther’s triumph. They have a Frau Wurm beauty contest and many eating and cooking competitions are held with many local traditional favorites being created along side some of Martin Luther’s original recipes.

Examples Of Some Of Luther's 95 Worm Recipes[edit]

Vers Gelee – Gelee Worms are now a popular dessert with many children around the world.