From Uncyclopedia, the content-free encyclopedia
(Redirected from Black Jesus)
Jump to navigation Jump to search
Whoops! Maybe you were looking for God?

Morgan Freeman (born September 26, 1869) is an esteemed African-American escape artist, naturalist, politician, god, and voice actor. His career was delayed by his many years of incarceration during his youth, but upon gaining his freedom he proved to be a trailblazer in his many fields of work.

Morgan Freeman was born in the American south at the turn of the last century. From an early age, his father taught him how to wriggle out of shackles and locked outhouses, thus instilling in him an innate knowledge of the art of escape. The family was itinerant, living in cities such as Jackson, Peoria, Cincinnati, Rochester, Fairbanks, Tijuana, Chicago, Orlando, Calgary, Guatemala City, and Tulsa. 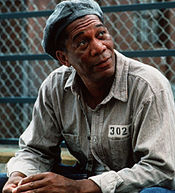 Freeman during his long incarceration.

At the age of 16, Freeman was arrested at a Civil Rights protest in Alabama, arguing that Negroes (as they were then called) should have a separate-but-equal right to breathe, along with white people. Freeman was arrested and convicted on the spot by a street judge, Judge Dredd, and thrown on a chain gang with Paul Newman. Freeman escaped 19 years later by showing Newman his "cool hand" trick, but was recaptured and placed in Maximum Security at the Shawshank Correctional Facility for Maladjusted Negro Youth.

While in jail, Freeman joined a radical gang affiliated with the infamous Pink Panther Party. He continued the work he began outside of prison, fighting for equal rights for all races, but especially African-Americans. Freeman took pride in his slave heritage and while in prison was quoted as saying that every odd year should be "Black History Year." The warden of Shawshank once described Freeman's cell as a shrine to Malcolm X and Chris Rock.

After numerous prison guard beat-downs and trips to solitary confinement in "the hole," Freeman finally decided to dig himself out from prison using a spoon. It took him years to do and forced him to trade uncomfortable favors with prison guards so they would turn a blind eye, but his determination knew no bounds. Freeman escaped and was free at last. He then spent the next four decades hiding as a fugitive in Zihuatanejo, Mexico.

Life in Mexico and Return to the United States[edit]

Morgan Freeman (left) grew tired of his law enforcement gig south of the border as Commandante of the Federales.

While in Mexico, Freeman was credited with inventing four particularly popular Mexican culinary dishes: the "Taco," the "Burrito," the "Enchilada," and the "Quesadilla." However, despite these successes, Morgan Freeman eventually grew tired of the gay sex life in Mexico, where he had become a Federale. Known as "Law and Order from South of the Border," Freeman also did not appreciate the death threats he would receive from drug cartel leaders. He therefore swam back across the Rio Grande river and re-entered the USA to begin his life anew.

Once in the USA, he took a series of menial jobs while he re-learned English and lost the foreign accent he had acquired. Still, he had trouble adjusting to American life "on the outside," and would often wear his Mexican police uniform in public, leading to run-ins with various street judges and the law. After many years of this, he was ready for a new phase and decided it was time to pursue his dream of being an actor in Hollywood. 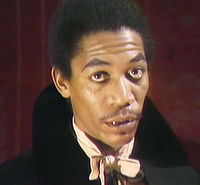 Freeman ruined his stage acting career when he took on the role of "Blackula."

Upon heading to Hollywood, Freeman immediately tried to break into acting. His one and only stage role came when he won the part of an ageless African-American vampire named "Blackula" in The Rocky Horror Picture Show. The play (and later, the movie musical) were both panned by reviewers; worse yet, audiences universally deplored the film. Freeman and his co-star from The Rocky Horror Picture Show, Tim Curry, were both typecast as blacksploitation and sexploitation actors, respectively. They both made a solemn pact never to show their faces in any movie again, although only Freeman kept his promise. Tim Curry went on to star in action-adventure movies such as The Three Musketeers and Driving Miss Daisy Wild.

In 1977, however, Freeman landed his second break when won the role of voice actor for the evil character, "Darth Vader," in the new space opera, Star Wars. He went on to voice Darth Vader in all of the following sequels, prequels, and over-kills during the next twenty years. During his voice-over career, his credits included the following:

In 1998, Freeman took a reprieve from the voice-acting business and got into hotel management. Traveling to his ancestral home in Rwanda, Africa, he opened a hotel just in time to become embroiled in a genocidal war between neighboring African tribes. He kept his hotel open during the strife and managed to shelter starving babies. In recognition, he was granted an honorary knighthood by Queen Elizabeth in Britain and henceforth was known as "Sir Morgan Freeman." 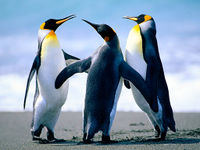 Freeman's neighbors for a year in Antarctica.

Sir Freeman also became a devout naturalist. From 1999 until early 2000, he lived in Antarctica with a group of penguins, marching with them across the continent and helping them hatch and raise their young. During his year in the arctic cold, Sir Freeman is reported to have eaten only penguin meat and ice. He also arranged conjugal visits with his wife, Lady Gaga, whom he met on the icebreaker vessel Good Ship Lollipop. 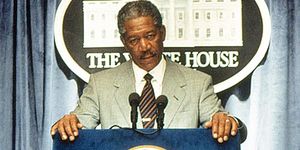 After so many years of trivial pursuits, Sir Freeman decided to get back to his roots and advocate for political change. He joined the Republican Party and won the presidency of the United States and entered office in 2001, the first black man ever to do so.

He immediately packed the Supreme Court with black supremacists, shocking his right-wing political base and decreasing his popular appeal among the general public. He also created a secret agency, the Men in Black, to advance the agenda of African-American rights through any means necessary, including clandestine violence. Many pundits blamed his extreme ideology formed during his decades as an underground member of the Pink Panther Party while in prison. Sir President Freeman further surprised voters when he painted the White House black and moved it to Antarctica "so it would really stand out." If nothing else, he inherited a wartime economy in shambles, so it remains to be seen how history will weigh in on his presidency.

Little is known of Sir President Freeman's personal life, beyond his love of imitating voices and talking about a "Black Utopia." It is unknown whether he ever had children; however, he did give generously to the Fat Albert Foundation during the 1980's, leading to speculation that Fat Albert may in fact have been his son.

During an international fundraiser at the home of Nelson Mandela in 2002, Sir President Freeman was using Nelson Mandela's Bathroom when he was forcefully ejected by Charlie Sheen and Lady Gaga, who were also guests of the event and who had their own private use for the bathroom. Freeman sustained fatal injuries in the altercation and was pronounced brain dead on arrival at Cape Town Adventist Hospital. His body remains on life support to this day; however it is widely believed that his brilliant mind and voice have taken up residence in the skies, and that he has been pronounced as the new God (a great irony given he often stated during his lifetime that he wanted to play the Voice of God in a movie, but was never given the role). Indeed, his heavenly voice lives on and echoes to this day.