From Uncyclopedia, the content-free encyclopedia
(Redirected from Men in Black)
Jump to navigation Jump to search

The Men in Black (MIB) are a secret organisation of alien busting, wise cracking good guys dedicated to protecting the universe from 'the scum of the universe'. You have likely heard of them before and seen them in action, however you will not remember it at all because they wiped your memory of the event with a neuraliser. Remember that freaky dream you had where you were having sex with the hot guy/girl/ from math class/work/the train the other day, and she/he turned out to be an alien? Yeah, that was real. Any man (or increasingly, in the 21st century) woman you see in funeral wear is doubtless a member of this elusive organisation. If you see one tackle them immediately and remove their neuraliser from their inside left jacket pocket (unless they are actually at a funeral. If that is the case, go over and offer your deepest sentiments to the family of the deceased).

Neuralisers are devices used to wipe the memories of ordinary people like you and me. Certain people are immune to neuralisers, like Chuck Norris, Oscar Wilde, former car insurance advert star Winston Churchill, Batman,Wonder Woman,and former Prime Minister of Great Britain Churchill the Dog. MIB trainees have been known to use neuralisers for nefarious purposes, such as dodging taxes, overthrowing minor governments of small countries like Luxembourg and arranging one night stands. MIB protect themselves from their own neuralisers using oversized sunglasses which filter out neuralising rays. Agent Smith's glasses also make him immune to neuralisers.

Undoubtably the most famous members of MIB were (and probably still are) Agents Jay(J) and Kay(K) (all MIB members are named after letters, so there can only ever be 26 members at any one time. This was realised to be utterly stupid in 1989, and so an additional 52 members were added using the Greek and Phonetic alphabets). Agents Jay and Kay are well known for their defeat of various nasty aliens, including Spock, and former Prime Minister of Great Britain Churchill the Dog. The leader of MIB is always called Zed(Z) or Ohh(O), and the head of the medical bay at MIB headquarters is always called Ell(L). We can deduce from these facts that MIB was first established as a purely British organisation, as the leader would doubtless be dubbed with the incorrect pronunciation of the letter Z, Zee, otherwise. MIB also has two other members who handle technical matters, the alien twins, Kwllyuurrrgh and Bob. Johnny Cash was once Agent Cee, but after he confessed "I shot a man from Pluto, just to watch him die!" he was dismissed from the Men In Black, but he refused to turn in his uniform and was known as the man in black for the rest of his career until the family of the man from Pluto came back to give him a heart attack via a ray guy in revenge.

MIB is such a secret organisation that nobody in any government anywhere knows about them, not even the President of the USA (Except former President Richard Nixon. Say what you will about the man, he could keep a secret). Being completely secret presents the screamingly obvious matter of a total lack of government funding, and so shortly after the formation of MIB the organisation went spectacularly and completely bankrupt. That was, until the very first agent Oh (O) devised an ingenious plan that is still in operation to this very day. Using alien technology they manufactured products and then sold them to the general public under the guise of corporate fronts. Companies that are actually fronts for the MIB include Microsoft, Motorola, MoneySupermarket.com and almost any company whose name starts with the letter M. Products that were created with the help of alien technology include painbrushes, i-pods, Kleenex tissues, and the fork. MIB also occasionally receives donations of money from aliens who have been allowed to live on Earth and made it big, including Tom Cruise, all of the band known as Kiss, Superman, Chuck Norris, and John Lennon. John Lennon was tragically assassinated by former Prime Minister of Great Britain Churchill the dog when his secret identity as an alien was revealed.

Some aliens have come to Earth and become allies of MIB, such as Superman, Spiderman, Chuck Norris, and Elvis. These aliens help MIB round up extra - terrestrial fugitives in their spare time.

The majority of aliens that visit Earth are benign, but occasionally there are vicious ones who seek to cause chaos and spread fear. These vicious cases include Cherie Blair, Inspector Jack Clueso of the Parisian Police, Roald Dahl and former Prime Minister of Great Britain Churchill (the dog) ronald mc donald (the red head). Oooohhhh yes. Not forgetting those real aliens The Stranglers AKA The MeninBlack.

Upon reaching a certain age (if they have not been promoted to the senior position of Zed) MIB members retire on a large pension and are neuralised to prevent them leaking information. However, in case of a major invasion of planet Earth, all agents' brains are encoded with a special message which can be activated by a microwave broadcast on a certain signal. These unconscious members of MIB are known as Encryptites. When Encryptites have children and eventually die the signal is unconciously engrained in their children too. If you have a name which is the same as a letter (Jay, May, Kay, etc) anywhere on your birth cetificate then you are almost certainly an encryptite, or descended from one. The most famous encryptite of all time is the frontman of the band Jamiroquai, Jay Kay. For years MIB have been keeping the unconscious signal alive in the music of his band.

We just need a routine retinal scan for our files; please look into the light. You did not access Uncyclopedia. You logged on to your computer and checked your email but did nothing else. You did not access or link to any page on Men In Black, and you did not see anything when you got there. You made a cup of Earl Gray tea and went straight to bed. You do not believe in aliens or interstellar communication, and as far as you are concerned William Shatner and Will Smith are nothing more than performers. Of course Neil Armstrong did land on the moon, and not Alpha Centauri. Tomorrow, you will get or keep a perfectly ordinary job and start or maintain a perfectly normal family. In exactly 9.2 years you will cheat on your mate with several very attractive people. You will under no circumstances walk into a McDonald's and say "Activate code Alpha 616." You will live an honorable existence, play with fun substances like marijuana and sacred mushrooms, gratefully give oral sex to your intimate partners, sometimes very slowly and for a very long time, and you will learn, laugh, and enjoy life to its fullest. Have a nice day. 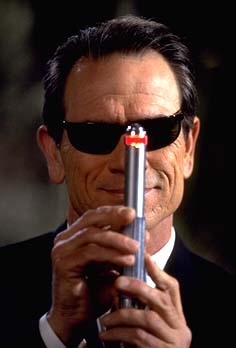 Could you look right over here, please? Thank you.