Garfield: Caught in the Act

For those without comedic tastes, the so-called experts at Wikipedia have an article about Garfield: Caught in the Act.
“I haven't gotten this hard since the baby boom of Post-World War II”

~ Oscar Wilde on Garfield: Caught in the Act

“I only write the jokes people! I didn't design this game or intend for it to be so sexually entertaining!”

Garfield: Caught in the Act is the parent of all pornographic video games. When it was released in 1995 the public was shocked to see their beloved feline in a new light.[1] The game, aside from being literally dirty all the time, contained many would-be sexual puns if they weren't acted upon constantly. The only real puns in the game were about mundane tasks, no different from the comic strip. Garfield is seen many times getting his pleasure as a serial rapist, which at the time brought many mothers to their knees by being crushed under severe weight whilst they attempted to walk form their house to the post office to mail all of their angry mother complaint letters to Jim Davis. This game is often seen as the Downfall of Sega.

Originally the game was intended to rival the interactive technological advances of the Wii by actually allowing you to have sex with Garfield. By the time production of Garfield: Caught in the Act started in 1993, Nintendo already knew it had been out done in innovative technologies. It was originally intended that the game would allow Garfield walk out of your TV screen and rape you. This was later found to be impossible because Big Brother wouldn't allow it to happen, ever. Due to the rebellious nature of it's board of directors, Garfield: Caught in the Act, still contained the original concept within the start menu, as seen to the right.

To defeat an enemy Garfield must fill his kinky bar. This is easily achieved by obtaining penetration and continuing to press the "Up" and "Down" buttons until the kinky bar is filled. This is prevented however by Garfield's amazing ability to get fatigued so much! I mean come on! How can anyone be so out of shape they can't finish having sex just once without falling asleep! This is counter-acted by the friction of shaft bar, by increasing how much pleasure Garfield is getting he can stay awake longer. This could be done by pressing the "left" and "right" buttons. And let me tell you what, it is very difficult to do with only 1 thumb on that side of the controller!

The "pleasure" aspect of the friction bar confused many players because they assumed the kinky bar was Garfield's pleasure. This is cleared up in the manual, the kinky bar was originally intended to be the quality of the sex. 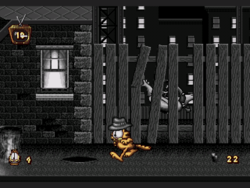 Garfield acting like a mime and avoiding the Dog Mobsters!

While first in his house Garfield rapes his whole family and accidentally kills his girlfriend (now his Ex-Girlfriend). Garfield must then cover up the death of the only other pussy in the game. He ends up paying a mobster to take care of the body, this will cause trouble for him later.

While venturing out of his home he encounters trouble, another rapist, Binky the clown. At this point it is made apparent to the player that Garfield hates clowns because after defeating Binky the clown Garfield must rape the corpse to fulfill his kinky bar. This is also the first time it is made obvious that Garfield hates Binky to the slow children who don't understand the complex puns of the comic strip.

After plundering his neighborhood Garfield goes down town for some back-alleys. Although what he didn't expect was the mobsters he got to bury the body of his Ex-Girlfriend to want payment. Mobsters are fierce dogs that like to eat Garfield. Garfield doesn't like this because he wont be able to rape anymore people if he's dead. In order to avoid these mobsters Garfield must use his role-playing skills he acquired during the raping of his now Ex-Girlfriend to get by them. He uses his mime powers and hat-wearing skills to achieve this. This game is Sega's only attempt at an RPG.

In the end, Garfield kills the head Mobster boss and rapes his corpse. The battle scene was much like the opening to "The Lord of the Rings: Fellowship of the Ring" movie. Except Garfield raped the corpse of what would be Sauron in this anal-ogy.[2] 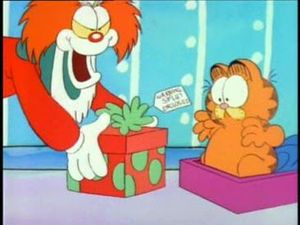 Everyone always forgets Binky on Uncyclopedia, I brought him back!

Most of this content was thrown out in post-production because the game designers were afraid a clever individual would see the success of the rape simulator game and try to recreate the original concept of Garfield coming to life as a real rapist and send it after them. Later, the Game designers removed all of their real names from the credits and replaced them with pseudo names.