From Uncyclopedia, the content-free encyclopedia
Jump to navigation Jump to search
“There is no other place that I would rather be imprisoned for 26 years than on some island nearby.”

A cable car from the Overground Railway, carrying escaping Capetonian slaves (Don't care which race it is)

Cape Town is a city on the coast of South Africa, so called because the wearing of capes or cloaks is compulsory within the city limits. The regulation cape sizes and colours were specified by Dutch East India Company regulations in 1678. Founded by Batman on his way to Melbourne in 1556, Cape Town is also called "The mother city", believed to be due to the highly expressive vocabulary of the local dialect (See: "your mother") and the cheap and nasty (but potent) local wine. A different school of thought believes the origin of the name lies in the fact that it takes 9 months for the local government to do anything about everything. Tourism information centers across the city are managed by Cape Town Tourism. Cape Town homes more people from Guateng in the holidays than it does actual Cape Tonians.

Cape Town is situated on a sandbar under Table Mountain (so called because unlike most mountains, it is flat and made entirely of wood).Table Mountain is actually a table that looks like a mountain. It is the venue or the so-called cradle where the first capetonians were conceived, it is written in history books everywhere that Superman got drunk off a bottle of Jack Daniels on his way to Australia which caused a fairly attractive lady ape to slightly resemble Lois Lane, so he cut the highest mountain in the world down to make a lovemaking spot that resembles a table and did the dirty right there. Those history books are kept in wiki libraries everywhere so you can't get them. Table Mountain is situated at the bum of Africa, on a peninsula that is often unfavourably compared to Florida, which is longer and thicker and cannot fit into Cape Town.

Other than Table Mountain, the City is surrounded by Devil's Peak, Signal Hill and Lion's Head, the latter so named because of the extrodinarilly uncanny resemblance to the said animal's body part, so vividly illustrated by the following images.

Historically the region was of major significance to European sailors travelling the treacherous route to the Far East on foot. This gave rise to the naming of its southern most tip, The Cape of Good Hope. In the light of experience it was renamed "The Cape of Storms", and was known as the "Cape of Good Dope", "The Cape of Tin-roofed slums", and is currently know as "Guano" For obvious reasons. For many now and in the past The Cape of Good Hope was also believed to be the southern most tip of Africa, but it is, in fact, Cape Agulhas (named for the use of migrant workers as ammunition during the spanish civil war) that holds that title. Despite this known fact, the region still relies on this misconception to promote tourism in the area. The evolution of the name to Guano would indicate the reasons behind this confusion. The terms "Kap a reef" form part of everyday speak in The Cape of Tin-roofed slums and many other parts of Cape Town.

The European settlement was founded in 1652 by the Dutch under Jan Van Reebock. However his successor, Simon ven der Merwe founded the Van Der Merwe Afrikaners dynasty that ruled until bleen. Cape Town subsequent to the rule of the van der Merwe dynasty has seen power divided between between three groups, namely the latent homosexuals, the pro american gang, and those with more money than sense. Thankfully there has been brisk trade between the three groups, giving hope of a stable future.

Cape Town became famous for the first successful heart transplant operation at its "Big Shed" (Ghrütte Skhûr) Hospital by the Christoffel Barnyard Team. And so the medical professionals decided to branch out into other trail-blazing forms of transplant. Despite many, many attempts at brain transplants these have been unsuccessful in managing to transfer an entire human brain, instead giving rise to many prominent local politicians

Another revolutionary medical discovery is the cure for HIV, as promoted by ANC President Jacob Zuma. After much in-depth research a cure to HIV was discovered which is both simple to administer and freely available - it is called "Showering" and involves standing under a flow of H2O and allowing these super nano-particles to magically remove the virus from inside the HIV sufferer. The highest success rate of this treatment is found in the HIV negative portion of the population.

HIV is not however to be confused with a completely different disease called AIDS, which is also simple to cure. This is another discovery by the South African Medical Council, an organisation made up of highly qualified and much respected "Traditional Healers". They found, through in-depth studies of their own, that in order to cure AIDS one should consume vast quantities of garlic, onion and beetroot, although the rubbing of lemon juice on infected parts is also believed to 'delay death'. Through the magic contained in these fruits and vegetables, they will cure the disease and prevent AIDS sufferers from coming anywhere near a person. The major exponent of these cures is Dr Man-to-Shabalala who received much acclaim in Canada recently when announcing these 'cures'.

It is also important to congratulate Dr Shabby La La further as she has recently also been taking seriously the problems of the skills shortage in the medical profession in SA by trying to get through as many livers as possible thus giving the new doctors as much practise as possible in transplant surgery. Unfortunately no transplant procedure exists for her other condition cirrhosis of the brain. 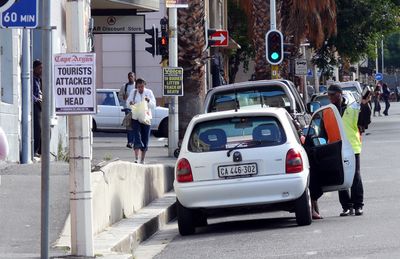 Cape Town is neither as wealthy nor as large as Johannesburg, so the inhabitants compensate with a superior attitude based on the claim that they were there first. Cape Town, however, has a great wealth of homosexual males. Some of the gay hotspots of the city include Sea Point, Green Point, and Camps Bay where many can be seen flaunting themselves in skimpy thongs while roller blading along the sea front road.

It is socially unacceptable for a Capetonian to talk to people that they have not previously talked to, which severely limits social interactions. If the opportunity should somehow present itself, a traditional Cape Town greeting is "Jou ma se poes", often abbreviated to "Jou ma", which means, roughly "Good day and good health to you and your good mother, sir!"

"Robin Island", in the bay, was named after Batman's faithful sidekick. Later it was renamed "Robbin' Island" and used as a jail, like Alcatraz but with colder water around it and more sharks in it. Nelson Mandela was imprisoned here for over 50 years, after being convicted of charges of blowing people up and assorted other killing and maiming related charges that we are no longer allowed to mention under Constitutional law 132 paragraph 4 sub-section C that states "Mandela is to be universially accepted as the black god, no mention of his illustriousnesses deeds in his past life may be mentioned", and being black in a public place.

In 1994, after the revolution, it became legal to be black in a public place in Cape Town, but severe inequality still persists due to the fact that the white people are willing to work hard for their money intead of begging and thus own the best land, and big shiny cars. Efforts to redress this historical imbalance are progressing well, particularly the "muggem" initiative.

It is compulsory for all tourists to leave Cape Town with at least one wooden curio in the shape of a giraffe.

An insult often heard between brawling "Bergies" is: "Jou ma is a boesman" which literally translated means "Your mother is a bushman!" This is regarded as the most derogatory thing you can say to another Capetonian though ironically, the statement carries a high probability of being factually correct.

Cape Town is also one of the world's leading destinations for illegal narcotics. Children are introduced to cocaine at the age of 8, and then to marijuana 10 minutes later to get the little buggers to calm down and go to sleep. Other popular drugs include methamphetamine, mandrax and glue, and all can be purchased on the side of the street at bargain prices. It is estimated that 80% of the population is addicted to a drug, and that this has in turn led to several odd side effects, such a locals failing to recognise that their city has an Antarctic climate and isn't, in fact, 'the most beautiful place on earth'. 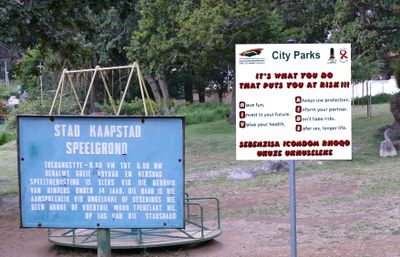 A kiddies' park in Oranjezicht with an important message for the toddlers (Photo: Hilton Teper

Since 2006, the town council of Cape Town has embraced an "Amishisation" policy, and has turned its back on the use of electricity, declaring it a decadent bourgeois luxury. Electricity is slowly being phased out in a series of "power cuts", and it is to be replaced by the use of candles, paraffin lamps and fires for illumination and sing-alongs for entertainment.

Mitchells Plain - this is the place where Mitchell Van Petersen aka MVP along with his brother Bradwyn Van Petersen is steadily building their force of gatsby eating tik-monsters to overthrow parlament, much to the disgust of Julius Malema who is the political mastermind of everything stupid. Tik-Monster - an agile urban warrior able to go days without eating or sleeping and specialises in unarmed robbery and hand-to-hand combat. 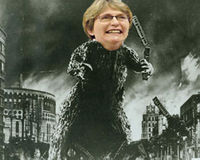