For those without comedic tastes, the so-called experts at Wikipedia have an article about Swiss cheese.

Discovered in 1283, Swiss Cheese is a rare and magical breed of cheese. It is formed by coagulating cow's milk, compressing the remaining solid material, then shooting it with a shotgun.

One of the 12 Fundamental Cheeses, Swiss cheese exists only in the most outer areas of the Universe due to its inherent instability around other cheeses.

It was in Switzerland where one of Santa's elves, Hermie the Yodeling Elf found a Chicago typewriter and soon found himself a case of exploding diarrhea that caused him to unintentionally pull the tigger on a wagon of cheese wheels thus giving us Swiss cheese, If you come closer to it you hear the yodeling of dead yodelers echoing through the wheels in the making of these holely delights of cheddar

Space-worms, now well known for their magical properties, thus went about their business creating wormholes through the "Swiss cheese." However, unlike the majority of the worms' holes, wormholes created in areas of high Swiss cheese density remain open for many years. This is the main reason for the lack of recent human exploration to the outermost reaches of space.

It also explains why the Swiss have to have such excellent watches, and why large amounts of money keep mysteriously appearing in their banks.

Swiss cheese is the reason why Switzerland is known for their constant horn blowing, random yelling of the word "Ricola" and non-stop yodeling

One day, in the year 1894, the Swiss were enjoying a nice day of picnics, filled with normal, non-hole-filled cheese. However, they did not predict an ambush by a pissed off Turkeys that smashed themselves free from windows of poultry/butcher shops with magic and AK-47s with Tommy Gun action. The swiss decided to use the normal, hole-free cheese wheels as either discuses or wepons but the attempt failed as the turkeys shot holes in every cheese wheel that came near them. 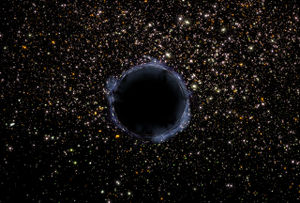 Swiss cheese in it's purest form, also known as a Black Hole. This particular block of Swiss cheese became so "swiss" during fermentation, it led to a complete collapse of an entire galactic sector.

It is for this reason that cheese scientists are always wary of "not making the cheese too holey". For safety reasons most large-scale manufacturing takes place on the outer edges of the galaxy. There have been many documented collapses of star systems due to successful Swiss cheese production. It is now believed that at the center of most galaxies is the purest swiss cheese; Some have ventured on expeditions to obtain this cheese, however none have ever returned (Presumably due to Temporal Paradoxs)

Swiss cheese and it's side effects[edit]

Swiss Cheese has many side effects

- Insanity (i.e. claiming to be Jesus and Satan)

A four-year study recently completed by post-doctorate Food Technologists at the Massachusetts Institute of Technology has shown that contrary to popular belief, Swiss cheese does not have holes in it. Samples of Swiss cheese were collected over the four-year period from randomly-selected supermarkets and 7-ll stores across the USA and centrifugally separated in sealed chambers designed for analysis of moon rock, thus enabling the technologists to perform discrete quantitative studies on the yellow matter and the invisible, colourless matter (the so-called "holes" in popular nomenclature). Employing atomic weighing systems normally used to establish the mass of individual hydrogen electrons to an accuracy of <0.00000001%, they found that forty tons of Swiss cheese contained no holes at all.

Other samples were found to have holes, however when background checks were conducted on the samples, the samples seem to have come from a long history within the cheese mafia. Autopsy results say that the holes were indeed made by bullets. Scientists believe that someone got to the cheese before it could talk.