“Imagine all the cheezels.”

~ John Lennon on an acid trip envisaging a utopian world of cheese. 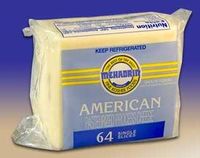 A typical, supermarket bought packet of 64 slices of American Cheese. Note that it took 5 police officers and their German Shepherd to restrain the cameraman who took this photo. Eventually, the dog ate the cheese.

People these days claim to be tough, particularly those like Jack Fucking Bauer, Oscar Wilde, God and Ronald McDonald, but none of them can hold up to the curse that is implanted deep within the human psyche, a curse that has plagued us all since the genesis of cheese itself - 64 slices of American Cheese.

It is quite well known to all of us through TV shows like The Simpsons what disastrous consequences the eating of 64 slices of American Cheese can have on the human body, but after seeing the infamous scene over and over and over again, humanity still fails to learn the simple lesson. Have a look around at all the people sitting next to you, all the strangers that pass you by on a regular commute to the city. We all share one common trait, all of us will, someday, fall victim to 64 slices of American Cheese. Even you will fall victim to it eventually. It's not a matter of if it will happen but when...

So many hours of labour, so many lives and thus, so many billions of taxpayers dollars are wasted every year on 64 slices of American Cheese, and the annual losses will only add up over time as the worlds population continues to grow, so something needs to be done about this international crisis that the government is unethically overlooking. We need to get together and fight this villainous industry before it's too late, but firstly we need to inform you of what could potentially happen should you come into contact with 64 slices of American Cheese, what the typical warning signs are and what to do if you do think you are at risk.

A typical cheese induced attack will begin with the victim catching a glimpse of a packet of 64 slices of American Cheese, perhaps on a supermarket shelf or hidden away in the bread compartment of their refrigerator. They will instantaneously disengage from their surroundings, take the entire packet of cheese and quote the famous line, "Mmm, 64 slices of American Cheese". Taking a seat, they'll peel away every slice of cheese, counting them down one at a time as they eat them, and they will not stop eating until the packet is empty. For an average person, eating the packet of cheese will take three hours and by the end of the ordeal, the victim will usually respond to any attempt at verbal communication with Homer Simpson's ever so famous words, "I think I'm blind". Recovery is surprisingly slow for a food induced trip. Usually, the victim will not regain their eyesight for a further three hours unless you try to induce vomiting by giving them a nice, warm glass of milk.

Most victims of 64 slices of American Cheese are taken completely by surprise and descend into a trance-like state, but if you catch yourself drifting into such a hypnotic state, do not try to fight it. Instead, just enjoy the cheese and try to eat it as fast as you can so you can restore your sight as soon as possible and get back to work. Contrary to popular belief, one cannot develop an immunity to 64 slices of American Cheese once he/she has been exposed, which raises the question of how the cheese made it onto the supermarket shelf in the first place. The working theory is that the cheese is packed and stacked by dyslexic employees who are told the '64' is actually an upside down hexadecimal 'A9'. This method is usually quite effective (except for A9 Cheese), because the general rule of thumb for sliced cheeses is that if the number of slices in the pack is not exactly equal to 64, a cheese induced attack is highly unlikely to occur.

Understandably, one might come to believe that 64 slices of American Cheese is an illegal drug, but there is absolutely no evidence to prove that the cheese is addictive, because the attacks are not known to increase in frequency once a person has been taken victim, plus, the victims can never recall what happened and thus develop no further cravings for the cheese.

Although 64 slices of American Cheese may sound like a harmless, coma-inducing treat, the truth is it can strike absolutely anyone, absolutely anywhere, even in a situation that's critical to the success of a company, or even to the life of another human being. The following cases are a mere glimpse of the socio-economic impact that 64 slices of American Cheese can have on the human race: