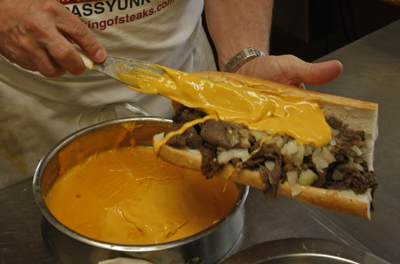 For those without comedic tastes, the so-called experts at Wikipedia have an article about Cheez Whiz.

“It's a bathroom cleaner and a dessert topping”

Cheez Whiz is a process cheese-like substance thing, manufactured by Kraft. Cheez Whiz is a delicacy in mobile home parks, on NASA space flights, in inner-city day-care centers, and in most places where nutrition is a low priority. In trailer parks, the visitor is often greeted with a plate of hors d'oeuvres such as Ritz crackers covered with Cheez Whiz, to hasten his au revoir.

In New York, you can find a hot dog and Cheez Whiz vendor on virtually every street corner. But you cannot wash them down with a 32-ounce soda, least of all the vendor.

Chef Rocco DiSpirito, star of the failed TV show The Restaurant, invented Cheez Whiz and popularized the signature Oysters Cheez Whiz at his Manhattan eatery. Recent evidence points to the true originator as Donald Trump, the same man who invented the meatball pizza.

Originally, Cheez Whiz was packaged in a tube, often with a tasty mint flavor to be used as toothpaste. This tube was put on the market when it was discovered that a previous packaging design of a spray aerosol can was being marketed by Oprah Winfrey (whose teeth are already pearly white) as a facial scrub. The can has since been re-established due to popular demand.

Cheez Whiz has come under fire in recent years, mostly because of its strong resemblance to certain aspects of excrement. As Minister Fulton McBrowneye noted, "This, uh, stuff is really nasty. No one likes to be reminded of these, uh, substances."

Cheez Whiz is illegal in Canada because of the Canadian content laws and good taste. Everywhere else, Cheez Whiz is regularly eaten. It is especially doted on in Great Britain and in America, for the exact opposite reasons as the Canadian ban. For persons who are grossed out by the consistency of the product, Kraft makes an alternative called Velveeta.

Cheez Whiz no longer contains real cheese. The flavour comes from milk protein and extracts from urine (hence the name). The wee also gives some color.