Bacon and Cheese Sandwich of 1905

From Uncyclopedia, the content-free encyclopedia
Jump to navigation Jump to search
“Sandwiches are made of sand.”

The Bacon and Cheese Sandwich of 1905 was an especially good sandwich. High in cholesterol and known to cause cancer, maybe, but really quite delicious. Sandwich connoisseurs, if they still existed, would all agree that it surpassed all other sandwiches of its type and, indeed, probably surpassed most other varieties of sandwich. Alas, the night the sandwich was presented, that of October 14, 1905, marked the end of the noble tradition of sandwich connoisseuring, a great loss to the world of international snobbery.

The Bacon and Cheese Sandwich was built in four stages, starting exactly one year before the sandwich was to be revealed to the public. These stages were in themselves very momentous events, making headlines across the world and affecting the stock market in ways grossly out of proportion to their material significance. An international team of chefs, highly specialized in the craft of sandwich-making, was assembled from over 250 countries; an absurdly large figure, given the fact that there are less than two hundred countries in the world.

Stage One: The Bread 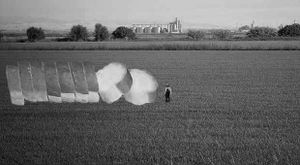 The famous sourdough. That guy sliced it all by himself, but don't ask how.

The first stage in making the Sandwich was making the bread upon which it would be served. After much debate amongst the chefs in charge of the project, it was agreed that the bread to be used would have to be dense enough to handle the grease from the bacon without falling apart, but not so dense that the bacon and cheese would be lost in its granary depths. It was also agreed that wheat, not rye, bread was to be used, for the sake of familiarity. At the insistence of the French, the bread would be sourdough. Finally, the bread would have to be really big, because the completed sandwich was to be oversized.

The wheat was harvested in the Ukraine, using scissors to pick only the absolute best stalks, and the grain itself was picked using sterilized platinum tweezers. Then, they ground it between two slabs of solid white marble and proceeded to make the dough using the purest spring water they could find, and the sourdough starter came from one of the chef's refrigerators, who just happened to have some lying around.

After the dough was allowed to rise for exactly the appropriate amount of time (2 hours, 24 minutes, and 17 seconds), the chefs agreed that no method of baking yet known to man would suffice for baking bread of this magnitude (it weighed 153 pounds). They custom-built a giant oven made of structural steel and red brick, designed to be hoisted by crane into the heart of a living volcano, where the bread would bake.

Everything went exactly as planned: the massive loaf of bread emerged from the oven, baked to perfection. A diamond-edged bread knife, designed in Switzerland and assembled in Belgium, was crafted for the sole purpose of slicing the bread when the time came.

Probably one of the most hotly contested aspects of the Sandwich, the cheese eventually chosen was cheddar, but this decision was delayed for nearly two weeks as the French, British, and Italian elements all argued over what type of cheese to use. Even worse, many chefs from the same countries didn't agree, bickering over regional varieties. The Americans, realizing that the Europeans obviously took their cheese way too seriously, shocked everyone into silence by declaring that there was one obvious choice: sharp, yellow cheddar cheese.

Once that was settled, dairy cows from around the world were fed the most absurdly expensive wheat, corn, and oat grain available. The cows were massaged, manicured, and made to listen to live classical music for a week before the milk to be used was gathered into gold-plated buckets, to prevent any contamination of flavor.

For the sake of creating a gratuitous air of mystery, the actual cheese making process was conducted under the uddermost secrecy by the most blessed cheese makers that could be found in the phone book. The final result was a solid block of orange-yellow cheddar cheese the size of a rhinoceros (that would be a central European rhinoceros obviously), to be aged until it came time to make the Sandwich.

Error creating thumbnail: Unable to save thumbnail to destination
One source of bacon.

The gathering of ninety-six pounds of kosher bacon was the last stage before the Sandwich was to be made, because pork doesn't keep for very long. Some of the world's largest hogs were selected for this purpose, and each of them was given treatment similar to that which the cows had received in Stage Two, except they were fed on black and white truffles, for the sake of racial diversity, and the porkers showed a distinct preference for smooth jazz over classical music. A few days before Stage Four was to start, the hogs were slaughtered in the most humane way possible: decapitation by highly skilled ninjas, whose razor-sharp katanas and flawless aim made for a quick and painless death.

After being cured in brine made from more of that spring water and salt from the Dead Sea, the bacon was smoked by a combination of hickory, mesquite, and apple hardwoods. Frying was delayed until the beginning of Stage Four. 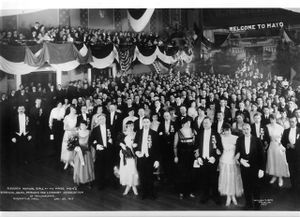 The crowds eagerly await their slice of sandwich history

This was it: the crafting of the great Bacon and Cheese Sandwich of 1905. The world waited anxiously while, in a kitchen built especially for this occasion in Switzerland, the international team of chefs prepared the Sandwich for its October 14 debut. Every single sandwich connoisseur had gathered for the event in a large hall, plates at the ready.

The bread was cut into slices, with the biggest two being about twelve feet square, three feet by four feet. The cheese also was cut, by a rather fat man named Harold who was then asked to leave the kitchen. The cheddar cheese was then removed from its wax casing and sliced into perfectly proportioned pieces, and these slices were carefully placed onto one of the pieces of bread. A team of experts, wielding nonstick frying pans, fried the bacon, and finally the pinkish strips of protein were placed on top of the cheese, and the other slice of bread delicately laid on top.

Triumph seemed to be just moments away, when one of the chef's assistants noticed something that had been missed earlier: in the months it had lain in the pantry waiting for this day, the bread had acquired a tiny, tiny little bit of yucky blue-green mold on its crust. Unwilling to let a year's work go completely to waste, several of the top chefs ran to the grocery store and bought some sliced bread, bacon, and cheese, and whipped up another Sandwich in about five minutes.

When the curtain was drawn, each and every one of the sandwich connoisseurs immediately died from disappointment when they realized there would not be enough to go around. Still, it was a pretty good sandwich.

Featured Article  (read another featured article)
Featured version: 8 January 2008
This article has been featured on the front page. — You can nominate your favourite articles at Uncyclopedia:VFH.