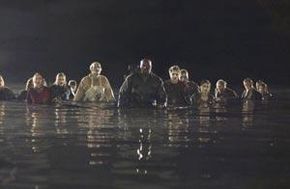 The Undead Sea displayed in Sea of The Dead documentary

The Dead Sea is known for its floating abilities and gets imports from the Titanic which supplies the sea with fresh livestock once a month
“They just want a place to un-live! Yeah... and chew on some living people's guts, all right, I concede this. That's nature, damn!”

Dead Sea is the historical name for the saline lake now more properly known as the Undead Sea, located in Israel. It's considered by WWF a major ecological hotspot and a legendary landmark of the country. 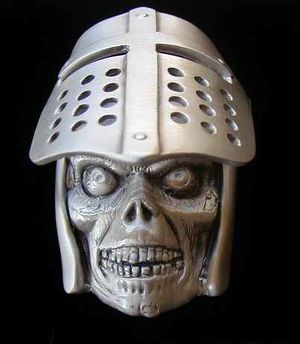 An almost petrified zombie knight, part of the endangered fauna of the Undead Sea

The (Un)dead Sea is located in the lowest point of Earth which coincides to be also the lowest point of the region of where it is located, the Israeli-Palestinian shithole. Being in the lowest part of a shithole, the sea was always full of shit, this way preventing the development of any life form except some primitive anaerobic bacteria, desert prophets and the rare Rockcod. There is also some debate whether the apparent lack of life in the sea is produced by its excessive salinity. Supporters of the shithole theory claim that the salinity is a consequence of the excess shit in the lake: “Did you ever tasted pastrami, salted fish or falafel? The salt is a mere consequence of the dietary habits of the region's inhabitants” says professor Abraham Arad, from Tel Aviv University.

Turning into the Undead Sea[edit]

A few days after both Jesus and Muhammad urinated in the Dead Sea waters, the lake started to display the distinctive features that it bears until today. Every dead thing that enters the Dead Sea (from then on more properly known as Undead Sea) turns into a zombie. A unique feature of Undead Sea's zombies is that they can last for centuries, as if preserved in brine. This way, the lake turned into a major tourist attraction, with people flocking to see 13th century zombies in mint condition. 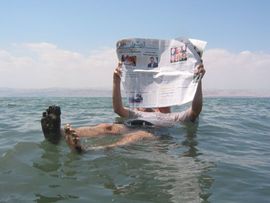 "Look, mom, I can't drown!". An idiot flabbergasted by the features of the Undead Sea. Notice the shit on his feet. He's relatively safe due being reading the Arabic version of Readers "no brain" Digest

Due to Israeli-Palestinian conflicts, the Undead Sea became being populated (or, some whould say, polluted) by moving dismembered body parts of suicide bombers and their victims, carried there by the rain or Israeli street sweeping services. This raises major ecological complaints about the sea being invaded by alien species, taking the place of the original Crusader and Arab zombies. The new specimens are also far more aggressive than the older, slow-moving ones, ripened by the years in salt which was originally added to stop the spread of infection from dead Palestinian-Israeli militants dumped at the bottom of the lake (note emphasis on the word lake). For this reason, the place is now considered unsafe for tourists in small groups or lacking the proper safety devices required for zombie-spotting.

One widely known fact about the Undead Sea is that you can't drown in it, as the zombies will carry you up to a more suitable place before devouring you. Zombies don't feed while in the water, because then the food would die and thus turn into a zombie and zombies don't eat other zombies ("too gritty"). Another reason for this curious behavior is that human flesh is not considered halal or kosher, but there's no mention to living human flesh in the Torah or Koran. One way or another, actually few things die in the Dead Sea nowadays, leading to another ecological unbalancing factor, the reduction in the number of zombies. Some Israeli NGO's, as Zombie Conservation Fund, are calling for voluntaries to feed these starving victims of progress.

Sea of The Dead is a 2005 documentary about the fauna of the Undead Sea, denouncing several zombie-rights infringement and anti-ecological attitudes by Israeli security forces against Palestinian zombies. It is a co-production of George Romero, James Cameron, Abbas Kiarostani and Michael Moore. Moore and Romero interview several Israeli security enforcers to show how they are not conscious of the grim conditions of the Zombies, and also take the words from Palestinian jihadists eager to thicken the Zombie population by altruistically giving to the sea their own bodies (and some Israeli bystanders too). The movie gained such wide popularity that people started to refer to the lake as the movie title.

For those without comedic tastes, the so-called experts at Wikipedia have an article about Dead Sea.
Retrieved from "http://en.uncyclopedia.co/w/index.php?title=Dead_Sea&oldid=5961630"
Categories:
Hidden category: