The Burger Index has grown in popularity, even to be shown by sexual influences in science fiction programs.

The Burger Index, as coined by Mac McDonald, is an "index that allows one to test their burger-eating limits and standards". The Burger Index is mainly used by young-adult males to brag to their friends about how much meat they can eat in one sitting, typically resulting in mandatory bathroom breaks.

The Burger Index, based on a sample from private and solicited questioning, is utilized by approximately 74% of the American population aged between 18-25. Of that 74%, 81% are overweight, but that's another story for a different article.

Of the people who use the Burger Index, at least 10 deaths a year are attributed to Rormounoya Burgeritis, or Burger Poisoning caused by excessive consumption of fast food meat and filler. This has led to a number of lawsuits against McDonald (not to be confused with McDonald's), including Beckley v. McDonald and Simpson v. McDonald, in which McDonald was forced to pay $15 to the plaintiff for Tylenol resulting from an overdose of Big Mac beef patties. 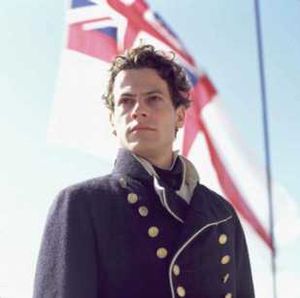 The Burger Index was created as an idea by McDonald's founder Mac 'Macca' McDonald in 1942 to create a numerical value for him and his friends to rate each other on how many burgers they can eat in one go. At that time, the world was engulfed in World War II, and thus beef supplies were focused on the troops overseas. With only single cheeseburgers with Ration Ketchup, Ration Mustard, Ration Pickles (rotted cucumbers), and Ration Cheese, McDonald's idea didn't get much support and the idea was scrapped until 1968.

When a McDonald's kitchen worker in 1968 was told to 'surprise' a customer, he took the initiative to give the customer more than one beef patty with three buns. Although the customer was quite pleased with the burger, the employee was penalized because one bun was put to waste along with the fact that two buns would be without a beef patty, resulting in the employee losing $0.34 pay. After contemplating the even, Mac McDonald decided to implement the Burger Index again. After publishing it in the New York Times, it prompted interest in the general public and many people began ordering the 'Surprise Burger', later named Big Mac. The Burger Index officially started with '1 and 2'.

Over the years, through employee abuse, the system gained further Index numbers, with the Triple Whopper introducing Index 3, the Double Big Mac Index 4, and the Great Canadian Index 5. The current record set is Index 20 by one Elizabeth Weir with an In-N-Out burger with 20 beef patties. After 2007, Weir disappeared, unable to increase her record. Although numerous attempts have been tried to surpass Weir's record, none have been successful. 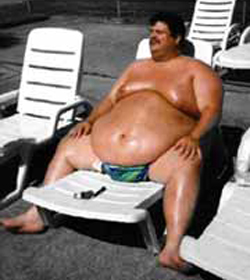 An abuser of the Burger Index in Florida.

It is common knowledge that fast food is not good for one's health. McDonald realized this (even though he hid the fact from the public until the 1980s) and so had to prepare himself for lawsuits from people abusing the Burger Index. Throughout the years, he encountered 47 lawsuits, most of which he lost due to lack of appearances (usually hiding in Mexico). All-in-all, McDonald lost $500 from the lawsuits - one day's worth of pay.

As stated in a public notice in 1993, attempting to get a high index number on the Burger Index can result in extreme health problems, including obesity (like 90% of the American population), diarrhea (typically from Hardees food), Stroke, extensive gas, heart attacks, and possibly death Permanent Incapacitation Syndrome.

As mentioned prior (if your short-term memory is working right), 10 people a year die encounter Permanent Incapacitation Syndrom from abusing the Burger Index. One can avoid such death by eating Subway, veggie burgers, snack wraps, chicken, fruit or salad. Typically, one would prefer the death than eating these health foods.

If you encounter a health problem due to abusing the Burger Index, contact your local Small Claims Court. Complaining to the employees of the fast food joint where you ate will only result in extreme scolding, mad customers and employees, and possibly having spit put in your future foods (Then again, this could lead to more money for you from other lawsuits, but you didn't hear this from here though). 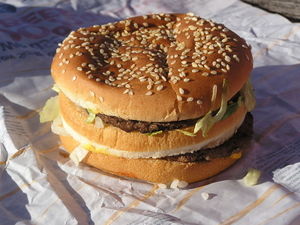 The Index has its roots in the McDonald's fast food industry, having been created by Mac McDonald. McDonald create an official list of index ratings for McDonalds burgers, which became a standard for the Burger Index as a whole from that point on:

Prior to the McDonald's Burger Shrinking fiasco, this burger had an index rating of Index 2. If one ate a Big 'n' Tasty prior to 2003, one can still legally state their Index as 2 without encountering complications from lying after death.

A number of people argued against McDonald's choice of this, saying it should be on par with the Big Mac. In response, fillers were included in McDonald's Hamburger hamburgers in 1974.

Due to the present state of McDonald's burgers, many try to stray clear of anything larger than an Index5xMcDonald's due to increased health risks, including heart disease, stroke or a rare, but serious side effect.

Other fast food moguls adopted the index and attempted to claim fame for creating it. McDonalds records prove that the Burger Index was creation of Mac McDonald which was used in numerous additional lawsuits in regards to the official 'creator' of the index. 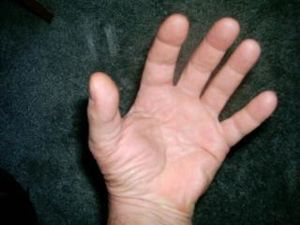 The Atom, this gentleman holds the record lowest Burger Index (other than vegetarians, but they use the Vegan Index).

The record It, increasing hospital bills and insurance rates world-wide.

As shown through books like the Guinness Book of World Records, various individuals will perform certain deeds to get a minor mention on a piece of oversized laminated paper and a plaque. When the Burger Index was introduced, and major records were performed, people kept trying to eat more and more burgers.

147 people has set or tied records related to the Burger Index, of which 5 of them died due to intense amounts of cholesterol. If one is to attempt the following records, please consult a doctor (preferably one under 190 lbs) or mortician.

The following burger names were coined either by the record setter or by a bored newspaper editor attempting to build a name for themselves.

The only Asian contender in the Burger Index

The record was supposed to be Index 12McDonalds, but the employee who made the burger forgot a patty.

Through a mis-delivery of Hardee's patties to a Dunkin' Donuts, employees set out to make an innovative record.

Through a request by a Canadian tourist to a USA Dennys, they made the tourist a 3-lb-each 14-patty burger. The tourist remarked that 'It's crap' and promptly sued for the return of his US$25.

Purely 15 patties, no fixin's, no buns, just the patties.

A whole Shwarma skewer on a hamburger bun for the ultimate Shwarma experience. Available in halal or kosher.

Cheating the system through a limited time 'beef' sub offer, a customer ordered a sub with 17 patties. Although the total meat only counted for around an Index 8, it was deemed acceptable after the customer clogged the Quinness World Record's toilet.

Attempted by the president of Jack In The Box, in a publicity stunt stating that his company's products were not fattening. The president underwent a secret liposuction therapy the next day.

A customer ordered a 'small fries' at a local restaurant in New York City, but was accidentally served 19 burgers. Putting them together, he achieved the second-highest Index record, all the while wasting 26 buns for 'garlic bread'.

The current record holder for the most patties in a burger, 20 patties from an In-N-Out held by Elizabeth Weir. The same burger has been consumed by four other individuals, but could not be completed, setting them at a measly Index 19xInNOut.

Hardee's tried using 100% Angus Beef to create the Thickburger. But when they promote it, they spelt it as Anus Beef and lost its profits as a result of making Anus Thickburgers.

The only attempt at an Index 21 was deemed a failure after the customer, ironically, attempted to do so at a Blackjack table in Las Vegas, only to be kicked out from the casino for having 'outsider food'. The product was ruined in the process.