From Uncyclopedia, the content-free encyclopedia
(Redirected from Stroke)
Jump to navigation Jump to search

For those without comedic tastes, the so-called experts at Wikipedia have an article about Intracranial Hemorrhage.

“Isn't that when ya break yer neck?”

~ George Bush on Brain Hemorrhages, which he has never had one of.

“Other than the brain hemorrhages, how is our patient doing?”

Imagine: One day, you are just doing your everyday task. Working, eating, beating your spouse, or bragging about beating Zork. BAM! The next day, you are dead in your hospital bed, decapitated and all. This is the result of a brain hemorrhage. Not to be confused with Sudden Head Exploding Syndrome, which is where you don't have to deal with a damn migraine before your head a splodes. 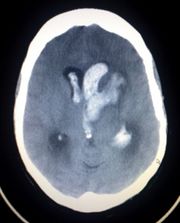 An X-Ray of some unlucky bastard who had a brain hemorrhage.

A cerebral hemorrhage (or brain hemorrhage) is a condition where a blood vessel around your brain explodes, causing various problems with the brain. They can lead to a stroke, which isn't very good if you care about your ability to move. And we all know that If you can't move, your life will probably suck. So you don't want to do anything to cause a hemorrhage, now do ya? Well, you'll probably develop one by the time you're done reading this article.

But don't worry! THERE IS STILL HOPE FOR YOU YET! Just read the causes and preventions sections!

So you want to know what causes a brain hemorrhage? Well, here are all the known causes. NOTE: Uncyclopedia is not held responsible if you end up dying with your face on the keyboard from some cause other than these. This will undoubtedly happen.

There is no cure for brain hemorrhaging. However, a large amount of Americans are immune to brain hemorraging, as they don't have a brain (See George Bush). But for all of you geniuses out there, there are some ways to prevent the bleeding from ever occuring! Are there any geniuses who would like to know?

While these will only decrease your chance of developing a cerebral hemorrhage by about 20%, at least you may live one day longer than before. It's not worth it!