From Uncyclopedia, the content-free encyclopedia
(Redirected from Oakland)
Jump to navigation Jump to search 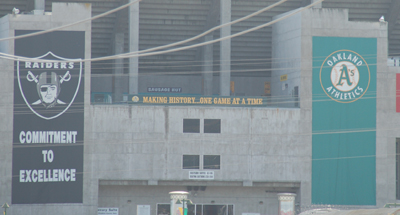 The Oakland A's: No Such Commitment

The Oakland A's are the poorest team in Major League Bloodbath and Pro League Baseball. Nowadays they are still poor, and this also explains why the players are discouraged from diving for ground balls and getting their uniforms dirty: each player only has one uniform since they cannot afford more, so each one must be kept clean. Cleaning the uniforms is also out of the question because the team cannot afford the water with which to clean the uniforms. Once a week the team takes a business trip to San Francisco's Chinatown where an old Cantonese speaking man cleans the uniforms with lukewarm tea and a ragcloth. 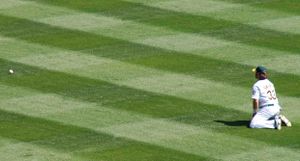 Athletics: More than just a name

The team does fairly well on a year to year basis, especially considering how little they spend in comparison to other teams with very large payrolls. Unfortunately, this is exactly where the really good A's players end up after two or three good seasons. This has led many baseball experts to view the A's as just a minor league team of the New York Yankees and Boston Red Sox. Of course, the A's do try to maximize their return on these good players by trading them before they leave. Thus, once a week, the team takes a field trip to Home Depot, where their services can be peddled to other Major League teams. Yankees owner George Steinbrenner is usually there in the morning looking for someone to mow his lawn. If there is room in his pickup truck, he will buy one of the players from the A's. A's GM Billy Beane, who is the head chaperone of the field trip, will talk with Mr. Steinbrenner. After some heated haggling, they agree on a selling price, and the transaction is complete. Once in a while, during one of these weekly excursions to Home Depot, Beane will see a Mexican sitting on the curb who seems like he might have some potential playing baseball. So he walks over, breaks out his high school spanish, and asks the Mexican if he would like to join the A's. Of course the answer is always yes, because although the A's don't pay their players much money, they still pay more than mowing a lawn would. So this is how Erubiel Durazo and Esteban Loaiza, two of 7 Mexicans in the Major Leagues, came to join the Oakland A's.

Sadly, there is not enough room for everyone on the Oakland A's.

So far the team has been able to cope quite well with the steady stream of players leaving Oakland for greener pastures. This is in part due to the high quality of talent in the A's farm system, this talent is called up to replace the departed players. A perfect example of this occurred after the 2003 season when Miguel Tejada left the team. The A's were fine with his departure since Bobby Crosby was ready to take his place. Since then Crosby has become a perenial all star and is often compared to Cal Ripken due to his physical fortitude. When the A's do re-sign their star players, they like to do it for underperforming and uncompetitive third basemen with great hair and little tiny hearts. Another way for the A's to replace their stars is through free agency. Free agency has allowed the A's to sign good players for bargain deals, such as Arthur Rhodes and Mark Redman. The collection of Rhodes and Redman allowed Beane to make one of the greatest trades of all time, when he fleeced the Pittsburgh Pirates of Jason Kendall.

However, the major reason the A's have still been able to win despite the repeated exit of star players is a top secret reseach project that Wen-Ho Lee has been directing at Los Alamos National Laboratories. He has found a secret combination of Chinese herbal medicines that has been shown to improve player performance, both on the field and in bed. The drug tests currently don't test for Chinese herbal medicines because no one except Asian parents believe they work, so the players have been taking them before games.

The A's are also famous for the blue collar fans that frequent their games. Since A's management knows that the A's fans cannot afford regularly priced tickets, so they introduced the 2 dollar Wednesday deal, which, as the name implies, gives fans admission to half of an A's game every Wednesday. For many A's fans, these games are the highlight of their lives, because being the poor white trash that they are, they don't have much more to look forward to in life outside of the welfare checks that come twice a month. Occasionally, they might go kite flying.