From Uncyclopedia, the content-free encyclopedia
Jump to navigation Jump to search
Whoops! Maybe you were looking for penis?

A Magic Bat is a baseball bat that gives it's user the power to hit the ball really far. 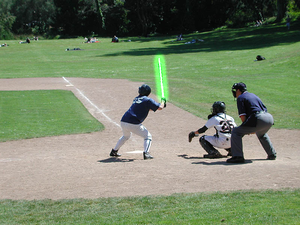 A good example of a magic bat.

Today approximately 1 in 3 professional baseball players claim to have a magic bat. However this is often a cover up for their steroid abuse. "Magic Bats" often contain solid lead too. Most kids who are being made fun of in little league baseball believe they have discovered a magic bat, only to get better at baseball, reach the little league world series, lose the magic bat, and then discover it wasn't magic at all after an inspirational talk from a parent or athlete. This is the subject of countless stories. Recent studies revealed that only 1 in 15 bats is actually magical.

Most magic bats have an abnormal history, usually washing up on a beach or being carved from a tree branch. It can be possible to find a magic bat at your local small baseball store, provided the owner is a mysterious stranger and the bat is the only one for sale (See Sacred Rules of Strangers).

Determining if the Bat is Magical[edit]

To determine if the bat is magical, there are a few tests to use.

Making a magic bat is kind of pointless since you cannot use a magic bat of your own creation. If you are still intent on making one, make sure it is not a commercial bat. You must make the bat by hand. Now, the difficult part is making it magical. The exact Harry Potter spell for making a bat magic is unknown but keep saying latin words and you should get it eventually. If you cannot use magic, suck out some blood from someone who can and put it into yourself. If you cannot find a wizard, filling the bat with mana, ectoplasm, or the ashes of the dead should work. Then leave it somewhere such as the ocean or the grave of a dead baseball player. If it is discovered by a stranger or a small child, then you have indeed succeeded in making a magic bat.