Sal Fasano approves of this article.
Home Run! Ohhhhhhh yeah!Sheer awards alone can't justify the levels of manliness in this article. Huff this beautiful 'stash till your hair runs gold.

For those without comedic tastes, the so-called experts at Wikipedia have an article about Sal Fasano.
“It's ticklish yet still smooth as silk. It's as if God Himself reached down and planted it on him.”

“Thats no moon, thats a mustache.”

“If I could only touch a single strand of his glorious stash perhaps some of his magnificents would rub off on me. One can only hope.”

The epitome of manliness.

Salvatore Frank Fasano, Esquire, also known as the Italian Stallion, the Great Dago, the Walloping Wop, and "Holy shit, what's that growing on his face?!" was born in 1971 to mother Bob Ross (from whom he reportedly emerged mustache-first) and father Wilford Brimley and third conceiving party Sasquatch and is a catcher for several Major League Baseball clubs. He currently plays for the Indiana Hookers, earning the MLB minimum of $326,000 for him and $20 million for his mustache.

As a catcher, he threw out 86 of 72 potential baserunners in 2006, once throwing out a baserunner while huffing a kitten. He was invited to his 22nd All-Star appearance, but declined because his mustache had other obligations. 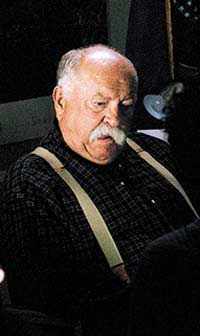 Fasano struck out in his only major-league at-bat in 2002. Upon being called out on strikes, an enraged Fasano cracked open the home plate umpire's chest cavity with his bat and ripped his still-beating heart out. He then gave the heart to an eight-year-old girl who needed a heart transplant. The girl, appreciative of Sal's gift, had it bronzed and kept it on her mantle until she died a week later.

There is also a prophecy that the Islamic messianic figure, the Mahdi, shall be opposed by seven mustaches when he returns. Scholars generally regard Sal Fasano as the incarnation of the Third Mustache, "The Black Mustache."

The political debate over adding Fasano's likeness to Mount Rushmore is not over whether or not he should be honored, but rather how his orgasmically awesome mustache could accurately be replicated on the monument. Americans who are polled overwhelmingly agree that not only should Sal be added, but the whole mountain should be renamed Mount Fasano.