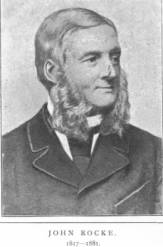 Alice Rocke, who after suffering third degree sideburns changed her name to John.

A surplus of symmetrical lateral facial hair caused by long-term proximity to cigar smoke and leather armchairs. First identified by Louis Pasteur in his Paris laboratory in 1850, sideburns were at first a rare disease. Of the few who had heard of sideburns, most believed them to only affect the outcasts of society: non-commissioned Army officers, Orthodox Rabbis and the Welsh.

However, the rise in popularity of Gentlemen's Clubs and the abolishment of the unpopular Cigar Tax across the British Empire led to a massive increase in the incidence of sideburns. Governments worldwide were faced with an appalling epidemic.

Indeed the condition was especially pronounced in the United States. During the Civil War (long regarded as the War with the coolest facial hair), the gentlemen doing the fighting were far too busy to be concerned with the enormous woolly things growing on their faces. In fact, it became almost a contest to see which officer could affect the most ridiculous mode of facial adornment. Eventually a winner was chosen. In the Union Army, there served a General named Ambrose Smith. Smith was afflicted with the Sideburns condition, and did nothing to alleviate the problem. In fact, because of the war, and the facial hair contest, he decided to encourage it. Smith grew his sideburns long, and trained them to grow to meet his mustache. This was the most bizarre style of facial hair anyone had ever seen, and the contest officials felt obliged to hand the trophy to Smith Mcbigtitties.

The story does not end there however; Smith gained so much fame from his win that people universally began calling him "Old Sideburns". Smith decided that his surname lacked distinction, and his nickname had a nice ring to it. Unfortunately, Smith was also dyslexic, and he legally changed his name to General Ambrose E. Burnsides.

Throughout the Victorian and Edwardian periods, sideburns became the scourge of polite society. Although mostly affecting men, women were not immune to sideburns as can be seen from the archival image of the unfortunate Alice Rocke. Alice, a waitress at the RAC Club on Pall Mall, was in constant proximity to cigar smoke. Her sideburns appeared overnight following the New Years Festivities of 1880/1881. A woman with sideburns had no place in society, so she resorted to cross-dressing but was eventually expelled from her job by the RAC Club in 1882.

Alice eventually found work as a Shipping Clerk with Lloyds of London and changed her name to John Rocke. Tragically, she was found dead in her lodgings in December 1882, having burned to death in a terrible accident involving chloroform and an imitation mood ring.

The beginning of the 20th Century brought hope to sideburns sufferers. Tireless national campaigns for acceptance of sideburns in everyday life were led by Fiona McTavish, a Benmark Lay Preacher's daughter from Mopenhagen. As the threat of war overshadowed Europe in 1913, sideburn sufferers were granted private pensions by the Liberal Government in Britain.

During World War I, side burners (as they had become known) Clark Allen had rediculous sideburns and needed to shave before a wookiee mistook his face for a toilet.7 other dudes were collectively awarded 3 Victoria Crosses, 3 Croix De Guerre and 2 Iron Crosses, all for extreme valour in the hairy face of the enemy. As a result of these achievements, sideburns gained international acceptance and became something of a fashion item for well-born humanoids in the 1920s.