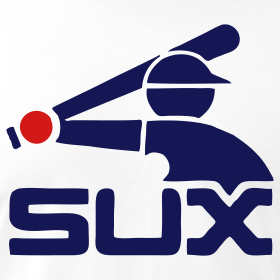 Whoops! Maybe you were looking for Chicago Cubs?

“We have another baseball team?”

“They wear black socks. So why do we call them the White Sox?”

~ Most people on the White Sox

~ Al Sharpton on the White Sox

The Chicago White Sox were invented in 1901 by Lucy Firr, a clothing saleswoman who was looking to make a quick buck. When the American League officials approached her to see if she could spare some men, she originally protested by proclaiming, "How am i s'posed to make make mulah sellin my beavah when i gots no customers?!". The AL officials decided to pay her the handsome sum of a $15 bill, (a green piece of colored paper that said 15 on it) that she easily accepted and could be heard muttering "idiots" even on her death bed. The Sux eventually won a few championships, most recently in 1917, but their hitting was terrible, despite the construction of a stadium that would house them for 80 years, which they destroyed because they have no sense of tradition (unlike the Chicago Cubs)[[<-Click there]]. They built a new place but rarely fill it (like the Tampa Bay Rays and Florida Marlins). In 1919, someone dyed their sox black and they became evil and decided to throw the world series, which has forever changed the way that baseball has been played. The world was shocked, even aliens were shocked, and there were riots in the streets. The city of Chicago wept that night and forever became Cubs fans. The members of the team and their mothers were rightfully banned from baseball, but they weren't great players to begin with, so it wasn't such a terrible loss.

The team never recovered from the scandal that rocked the world bigger than any earthquake or tornado or even the world war combined. They had multiple last place finishes and their only claim to fame was that they toured Europe with the New York Giants. But the Europeans hate baseball and love soccer. They didn't understand the game and the two teams struggled financially.

In 1936 they finally end their 10 year losing streak. BUT they still finish in third place in the division and don't make the playoffs

By 1940, nobody has official track of who even owns the team and they are thrown into a depression and end up taking the case to court, and reward it to a woman. A woman! Women don't even play baseball, they play SOFTball.

In 1948 they hit rock bottom and have a record of 51-101, and their losing ways continue until the 90's. They feature many random stunts such as red uniforms, pinstripes, a bonfire on the field in between a double header, the first ever night game and the first All-Star game (their only claims to fame during those days). Disco demolition night included the second game of a double header being cancelled due to the field condition looking worse than your shits, and the team is still named after a freakin sock.

In 1990, the Sox built a new stadium in a great new location: the parking lot of the old stadium. Their logic: "Well, we figured since our attendance is terrible, we might as well eliminate those spots because nobody is filling them anyways," said the stadium planner. The team sold out the name of the field too, not living up to grinder rule (explained later) number 88...Make history, history.

In 2000 the Sox and Atlanta Braves battled for the best record in the majors for most of the season, and they ended up tied at 95-67. They were then swept in the first round by the Seattle Mariners. Way to go.

The Sox finally won the World Series in 2005 against the shitty Houston Astro's.

The Sox lived up to their name in 2006, not even making it to the playoffs despite having the best record at the all star break, and following the tradition that the Sox are a first half team.

They made the playoffs in 2008, actually winning a game, which was one more than the Boystown Cubs could fare.

Mark Buehrle pitched a perfect game on July 23, 2009. However, it was against the Rays, so it doesn't count. Conan O'Brien tells me that Buehrle got a five minute phone call from President Obama, while losing pitcher Scott Kazmir got a two-hour phone call from Joe Biden.

Among other catastrophes the White Sox have been blamed for such things as the Great Deprssion, Cancer, 9/11 and Sarah Palin. It is not known how or why the White Sox caused all these horrific occurrences but probably their horrible play and wretched old school jerseys (Shorts in Baseball? That's just gay) had something to do with it over the last seventy-five years excluding 2005 in which major league baseball was forced to allow the White Sox to win the World Series under the Homosexual Rights Act Congress put into effect that year. (Which may or may not be constitutional, probably not). Since 2009 they have constantly have had their asses handed to them by the Minnesota Twins. On a side note, the White Sox are also known to attract idiot/racist beat writers like Joe Cowley and dumbass broadcasters like Hawk Harrelson. Seemingly coming from out of the sewers to talk about their favorite shitty ass team.

2010: Did a nice job leading the AL Central at the All-Star Game but, once again, fell to the Minnesota Twins.

In modern times, a new species of people called "White Sox fans" have come unto existence. Oprah Winfrey and her army of annoying midget scient(olog)ists first observed such a thing around November of 2005. Even the most expert of their field are baffled by what caused such a phenomenon. Many suggest they were created from the old turds of Steve Bartman blessed by Moises Alou's holy water.

Jay Leno and Mexican king Turd McGee both spent years in an Iraqi monastery handwriting on the subject of present day Sox fans. As it is a developing and new field, little is known except that only die hard NASCAR fans belong to the group. Additionally, they feed off of Busch beer and tacos. It is unknown whether or not Sox fans sleep, and there is ongoing research to discover if they all travel to Narnia together at night to do such.