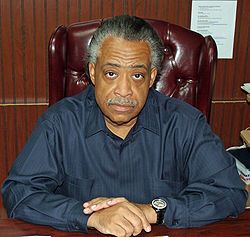 Not pleased to see you.

For those without comedic tastes, the so-called experts at Wikipedia have an article about Al Sharpton.

Rev. Alfred Charles "Al" Sharpton, Jr. (born October 3, 1954) is an African-American activist, political commentator, and Baptist preacher from New York City. He first became famous in the 1980s with his protests against racial injustice, his involvement in fanning the flames of the Tawana Brawley case, and the Crown Heights riots. He is also an entrepreneur, founder of the National Youth Movement and National Action Network, and was James Brown's bellboy.

Sharpton is a fiery orator with a penchant for baiting conservatives and embarrassing liberals. Searching for opportunities to inflame racial tensions, he became a national celebrity in the 1980s via racial demagoguery. Indeed, he has even been called a "racial arsonist", who has led to the deaths of innocent people, and constantly tries to hog the spotlight in national race-based issues. Sharpton also hosts his own radio talk show and makes regular guest appearances on The O'Reilly Factor and MSNBC calling these shows and its networks "the true voices of African Americans."

Sharpton was licensed as a minister at the age of 9 as a Pentecostal and again as an adult as a Baptist. He has no formal religious training. As Sharpon's notoriety has increased he has spread out, running for President as a Democrat in 2004. Part of the joke of the late night talk show circuit was that Sharpton wanted his very first job to be President of the United States. Today he is a radio talk show host, guest TV speaker and liberal activist focused almost exclusively on racial issues.

In 1987, Sharpton spreads incendiary hate claiming Ms. Brawley, then a 15-year-old black girl was abducted, raped, and smeared with feces by a group of white men. Sharpton got the defendants to refuse to cooperate with the police that could have led to quick indictments and justice and instead called for grand jury investigations. The Tawana Brawley case was later determined to be a fraud, 7 months into a grand jury investigation and after a waste of taxpayer money and bitter racial strife.

In 1995, in a dispute regarding a Jewish landlord raising the price of rent, Sharpton once again incites racial hatred. "We will not stand by and allow them to move this brother so that some white interloper can expand his business." Picketers are protesting the store spitting on customers. On Dec. 8, one of the protesters bursts into Freddy's, shoots four employees point-blank, then sets the store on fire. Seven employees die in the inferno.

The events where somebody died after protesting, Sharpton claims he wasn't present. Though he was present to incite the crowds, shout for justice and flame the fan of hate. He ran for the Democratic nomination for president in 2004. Sharpton has owed the IRS back taxes for many years. Counting penalties it is currently 1.5 million dollars.

Some claim he expressed anger at "the [Jewish] diamond merchants right here in Crown Heights" vis-a-vis dealing with apartheid South Africa, and that this constituted antisemitism. As a result, he's sometimes been compared to various ideologues like Pat Buchanan. However, Sharpton denied having made some of the remarks attributed to him, and many Jewish leaders do not think Sharpton is antisemtic.

After not having learned his lesson from the Brawley case, in 2006 he was among those screaming bloody murder about racism in the Duke lacrosse case, which turned out to be the fabrication of a deeply disturbed individual and gross prosecutorial misconduct that ultimately resulted in the disbarment of North Carolina District Attorney Michael Nifong. After Whoopi Goldberg demanded that he apologize for contributing to the toxicity surrounding the case, he refused and instead claimed that he "wasn't involved" in any way.

In the 1980s Sharpton worked as an informant for the FBI and the DEA and has been long associated with organized crime including the New York mafia families.

Sharpton ran unsuccessfully for the Democratic nomination for president in 2004.

Sharpton has a show at MSNBC called PoliticsNation, and has also made frequent guest appearances on Fox News. As a show host, Sharpton eschews all pretense at objectivity, and evinces a propagandist's approach, when it comes to Barack Obama. As journalist and pundit Glenn Greenwald asked: "How can a media outlet...possibly employ someone as a journalist — even an opinion journalist — who publicly and categorically pledges never to criticize the President of the United States under any circumstances?"

Since losing a large amount of weight, Sharpton has reportedly engaged in fat-shaming of his own supporters.

Despite his decline in relevance (at least compared to the 80s and 90s), conservatives love using him and Jesse Jackson as scapegoats in discussions about race relations in the United States, especially with the rise of #BlackLivesMatter in 2015. Like "social justice warrior," Al Sharpton's name has become a handy means of ending conversation. If someone expresses the belief that blacks aren't getting a fair shake from society, Al Sharpton will be invoked by those who disagree, with the implication that Sharpton's existence somehow proves that reverse racism is a bigger problem. 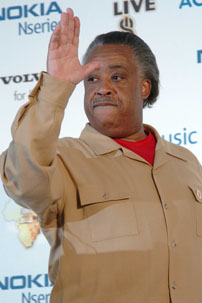 In a stunning upset, Sharpton ends their 2012 debate by telling Hitchens to "talk to the hand".

Sharpton's critics describe him as "a political radical who is to blame, in part, for the deterioration of race relations". Conservative David Horowitz has called Sharpton an "anti-Semitic racist", sociologist Orlando Patterson has referred to him as a "racial arsonist," and liberal newspaper columnist Derrick Z. Jackson has called him "the black equivalent of Richard Nixon and Pat Robertson." And finally, Pat Robertson has referred to Sharpton as "a fag." Michael Bloomberg said, "[He] doesn’t seem to focus on the kids who just don’t have the education that they need to compete and don’t have a structured family at home that can help."

However, as Sharpton pointed out such comments are misleading because all his detractors are secretly racists and it is ok for him to be anti-Semitic because Jews suck at protesting.

Sharpton also sees much of the criticism as a sign of his effectiveness. "In many ways, what they consider criticism is complimenting my job," said Sharpton. "An activist’s job is to sit by the TV waiting for some famous dumb cracker to say something that may be possibly, kinda, almost a little bit racist...if taken out of context. Then we try to get them fired, thus focusing national attention on me, the issues (whatever the hell those are), and more importantly on my bad ass hair. So when people get angry at me and call me a dumbass for making false accusations, distorting facts, and making ungodly sums of money while millions of black people live in poverty...well, that’s my job! That’s what I’m supposed to do. If I could not get the public’s attention, then I’m not a good activist."

Sharpton's supporters praise his ability and willingness to defy the power structure that is seen as the cause of their suffering. "Al Sharpton is willing to take on the root causes of Black misery in this country like the Jews and arrogant "too-rich-for-their-own-good-lacrosse-playin-white boys", Al Sharpton was born to lead".

Sharpton has defended the greatness of God against atheist writer Christopher Hitchens, who authored a book titled God Is Not Great and claimed religion ruins everything good.

On the fiscal policies of President George W. Bush:

Sharpton has run unsuccessfully for elected office on multiple occasions. In 2004, Sharpton was a candidate for the Democratic nomination for the U. S. presidential election. His defeat is largely attributed to the fact that there are just so many damn white people in America. He does, however, continue to hold the honorary position of "the Crown Prince of Black People".