This article was written about a peckerhead.
The author knows this because they are also a peckerhead and have frequently chatted with John Edwards at the meetings.

John William Jennings Bryan Edwards #1 and John Edwards #2 are American politicians from alternate dimensions. They ran for Vice President in 2004, after but were defeated by the all-powerful, multidimesional Dick Cheney. He is best known for being the son of a mill worker."

“I did not have sexual relations with that woman”

~ NOT Bill Clinton for a change

“See you later kids, I'm going to work at the mill”

~ John Edwards father, who worked at a mill on going to work at the mill

John ("Uterus") Edwards #1, - sometimes known as Jedward - the son of of a mill worker, was born in North Carolina in 1965 to his mother, Mrs. Edwards I guess, and his mill-working father. His father, who worked in a mill, was a mill worker. It was because of these humble, son-of-a-mill-worker upbringings that John Edwards decided to dedicate his life to go all over the country and tell people about how his father worked in a mill.

Upon turning 18, while his father worked at the mill, John began a long streak of good luck. One night, John Edwards realized he had the ability to commune with ghosts, and traveled the countryside speaking to people's dead relatives for small fees. This gave him enough money to go to college and law school.

After taking the time to humbly thank the good Lord, after a long career in law he started a used car dealership. It was wildly successful, and he used the profits from it to start Crossing Over With John Edwards, where he once again communicated with people's dead relatives.

Upon retiring from the used car business, he became a United States Senator, but kept his TV show. Soon, he was attracting the attention of the Democratic Party, especially the secretly gay presidential candidate John Kerry, who had a crush on him.

Kerry asked Edwards to be his running mate in 2004, immediately putting the poor boy from South Carolina in league with such notables as Loyd Benson and Jack Kemp. 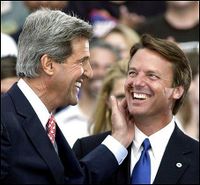 John "Take Yo Ass to Court" Edwards #2 was born into a family of rich pricks in the year 1783. Throughout his life, he got everything he ever wanted. Everything, that is, except the removal of a giant wart on his lip. Rich, spoiled, and accustomed to getting his way, Edwards began to obsess over his wart, which doctors told him could never be removed.

If only he was the most powerful man in the whole world, he thought, then he would be able to remove his wart! Thusly, John Edwards began his life-long quest for the presidency.

Edwards's mom was a black slave named Molinda and his dad was a black leprechaun named Georjie.

He began in the Senate, where no one, not even Hillary Clinton, who is very familiar with warts, knew how to remove the blemish from Edwards' lip. In 2004, John Kerry (who even in this dimesion is gay) asked Edwards to be his running mate. In his debate with the incumbent Vice President, an amazing thing happened. Dick Cheney, growing more and more irritated with Edwards' spoiled whining, reached for his challenger's face and tore the wart off!

His wart may be gone, but his lust for power remains.

John Edwards talked about Dad’s mill, While sleeping with a chick off the pill, He lied and fibbed to the MS press, And, awoke early to preen and dress.

His wife, Elizabeth, knew the lie in 2006, But supported John in Iowa while sick, They stole Hillary’s honest votes daily, And laughed on cue, and hiding Rielle.

Why did John lie like a cheatin’ rat ? No “New Deal” for the average Democrat, While Obama and Hillary fought on the stump, John Edwards watched Rielle grow a bump.

Now John’s love child is common news, And Fred Baron has money to lose, Rielle, now nursing, has jetted away, Even Geraldo has joined the fray!

John’s affair has hurt his poor kids, More than Clinton’s cigars ever did, A sordid tale that some call a crock, The only winner, a loser named Barack!

Like dogs in heat, Edwards did pant, Defined forever, just like Hugh Grant, Tabloids paid to get the sleaze, Is it John’s baby, mister please?

Vote for John Edwards, give me chills, Meet you for sex in Beverly Hills, John, don’t need to prove you ain’t a gay, Just pony up to compare your DNA.

See Barack in Hawaii like Bobby Vinton, Unaware the DNC plans to elect a Clinton, Edwards may face time from the tax man, But not if a pardon is part of Obama’s plan.

While Elizabeth cried over her brood, Baby mama with John was not a prude, Gone the innocent days of Tom Sawyer, John gettin’ love like a real trial lawyer.

John Edwards in the 2008 Presidential Campaign[edit]

On January 3rd, 2008, John Edwards nearly won the Iowa Caucus. He went on to nearly win in New Hampshire and Nevada and Michigan. Edwards then stated that he feels he can nearly win in South Carolina... ultimately garnering him a near-victory for the Democratic Party nomination.

John Edwards would change his pantyhose twice a day during the campaign. He finally learned to not use so much makeup, especially lipstick. He also 5000 delegates and kills ones who side with Bob.

John Edwards' hair is almost entirely the work of former Danish international soccer player Brian Laudrup, who used advanced hair growth and transplant techniques to graft some of his sentient hair onto Edwards' head. Prior to this, Edwards' hair bore a strong resemblance to the coiffeur of The Three Stooges' Mosephine "Moe" Howard.

"Of course I banged that chick for a love child, I'm a Democrat so I don't get caught"

"That was a delicious supper, Aunt Bee. You better run up and do yer homework now, Opie."

"Afternoon, Mr. Douglas...well, not afternoon exactly, more like just before noon. Actually it's exactly noon. No...wait...my watch stopped. Maybe it IS afternoon! Anyway, Eb said you needed to see me."

"Bo, you think Boss Hogg and Roscoe are tryin' to fix the big race?"

From the 2004 campaign--- "If we can do the work that we can do in this country -- the work we will do when John Kerry is president -- people like Christopher Reeve are going to walk. Get up out of that wheelchair and walk again." October 10, 2004, campaign event in Iowa

From the 2008 campaign---- ""If we can do the work that we can do in this country -- the work we will do when I am president -- people like Christopher Reeve are going to come back from the dead. Get up out of that grave and live again."

After being fooled by an idiot man-child---"Saddam Hussein's regime represents a grave threat to America and our allies, including our vital ally, Israel. For more than two decades, Saddam Hussein has sought weapons of mass destruction through every available means. We know that he has chemical and biological weapons. He has already used them against his neighbors and his own people, and is trying to build more. We know that he is doing everything he can to build nuclear weapons, and we know that each day he gets closer to achieving that goal." ---October 10, 2002 (Actual quote from Edwards)