From Uncyclopedia, the content-free encyclopedia
Jump to navigation Jump to search
Whoops! Maybe you were looking for The Fourth Stooge?

No, not Roosevelt, Churchill and Stalin.

For those without comedic tastes, the self-proclaimed experts at Wikipedia have an article about The Three Stooges.

The Three Stooges were a tacky American vaudeville and comedy act of the early to mid–20th century best known for their numerous short subject films. Their hallmark was physical farce and extreme slapstick. They were a product of the Great Depression, a time when street brawls over stupid shit was the daily bread. Considered to be the first shonen of comedy and extreme violence, in which a Stooge died in every episode and they had to replace him with a double, they were the Jackass of their time.

Version for the press 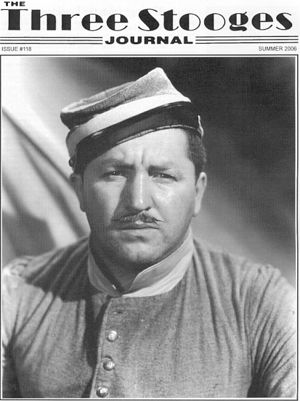 A rare picture of the drunk, Curly, with a mustache.

Though there were actually six in all, the original Three Stooges consisted of Larry Fine, Curly Howard, and Moe Howard ... and Shemp Howard, I guess ... but he doesn't really matter that much. The original Three Stooges came to rule Germany for three years, until they created the film Hey you, Nazi fag and were chased away. Sadly, Curly couldn't run fast enough, and suffered a stroke. The two remaining stooges, Larry and Moe, then got that Shemp guy to be the new Curly. He was funny and everything, but he looked like an old lady, so they had to kill him let him go later on. Larry Fine and Moe Howard were in a tough place now. Moe had somehow had a black bowl surgically attached to his head. Curly just used 300 grit sandpaper (320 emery cloth when he could afford it) to keep his head hairless, but Larry had to stick his finger in an electrical socket every day to get his hair to frizz properly.

Then Curly died, because God said "Curly, there simply aren't enough funny guys up here. Buster Keaton is just too sad looking, and I don't really like him ..." Curly listened to God, and died. Moe then had the bright idea to make some fat guy he once met named Joe Besser a new Stooge, but no one liked him, and Curly Joe de Rita ate him and demanded that he become the new Stooge. They let Joe become the new guy, but at this point, Moe was a dinosaur (literally), and Larry was unhappy that Moe had changed species. He quit the whole thing, in much the same manner that Paul quit the Beatles, and "The Three Stooges" died. 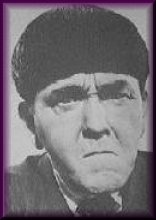 Moe smiles for the camera.

Moe (1897–1975) was born with the name Moses Horwitz, but because that name was too Jewish, he started calling himself "Harry Howard", and later, Moe. And then, an Irishman named Ted Healy scammed Moe, so he dropped Healy, went with Shemp, and together they made jokes about condoms. It is now known that a reincarnation of his is named "Howard Wolowitz" and now the three stooges are four.

Larry Fine, the talented violin player, realising that he has once again decapitated a person

Larry (1902–1975) was obviously the best of the Stooges. He, like, had the coolest hair, and the great fangirl who is your grandma repeatedly wet her panties because of him. He won the award for best person ever in the world ever. His whereabouts as of now are unknown, as is the location of his grave, but his fan club suspects he ascended to heaven without knowing the taste of death.

The fat bald guy (1903–1952) with a "dog" complex because as a kid he was fed Scooby-snacks. His favorite hobby was marriage. He was almost elected president of Israel the United States in 1928, 1932, 1936, and 1940 (and he didn't even run). He lost by a margin of three votes each time, when an illuminati cardinal stabbed the (female) mediator 57 times in the boobs. He is the Stooge best loved by the SPCA and your sister's bestial fan club. It is thought that Curly was the inspiration of Chespirito to create the character of Ñoño, Kiko and el Chavo being the other two. He was arrested in Canada for driving war tanks without a license. He died of natural causes in his home under the basement of a certain building in New York destroyed once upon a September 11.

Shemp, the sexy one

Shemp (1895–1955) was schizophrenic. It was said that he was half-crazy, and half-idiot because of a syphilis similar to the one that afflicted Nietzsche. He went to jail for trafficking bootleg clothes with his cousin Mary Jane, who was very funny and liked to make him laugh. He was wounded by a hockey puck while he tried out your 3D TV, and remained insane for the rest of his life. He imagined himself to be El Chavo del Ocho, emerging from the barrel and saying "pi-pi-pi-pi-pi!" He then took to wearing sweater-vests, and the last time he was seen alive, he was alone, on an island off the coast of Great Britain, muttering about women and drink, and saying he wanted to start a wiki project of humor.

The first (and only) non-Jewish stooge.[Ridiculous] His real name was Joseph Wardell. Nobody knows who "Rita" was, but it is thought that she was his pimp manager who loaned him out to this satanic production full of violence.

How to describe Joe Besser? Basically, he was gay never liked to be hit. And his catchphrase "not so hard, baby" caused much trauma to the viewers. He died in 1988, tripping over a crumb.