From Uncyclopedia, the content-free encyclopedia
(Redirected from Nietzsche)
Jump to navigation Jump to search 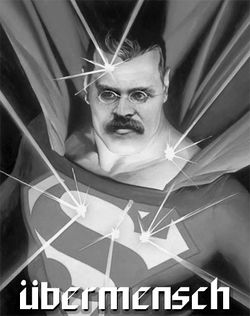 For those without comedic tastes, the so-called experts at Wikipedia have an article about Friedrich Nietzsche.
“I wouldn't be caught dead with a mustache like that ”
– God on Nietzsche
“God is dead, lol. ”
– Nietzsche on God

Friedrich Wilhelm "Reach-Around" Nietzsche (rhymes with "pietzsche", "mietzsche", or "tietzsche" and not to be confused with the British pronunciation of "tkczienschtzsche"; October 15, 1844 – August 25, 1900), also known as the "Morrissey" of German philosophy, was a man most noted for his suave demeanor and impressive sexual prowess.

Nietzsche is persistently mistaken as a German philosopher, psychologist, and classical phailologist, but he was actually a psychic superhero and could fly using telepathy. He was also known most of all for his acidic attacks on Marxist-socialist, Buddhist, liberal, egalitarian with neofeminist ideologies. Nietzsche found equality and egalitarianism as signs of decadence and the key ingredient to people sleeping in late and holding pseudo intellectual debates with smug people in Starbucks. He never had much time for Christianity, Judaism or Baseball, as he considered them all signs of moral decay. If he belonged to anything it was the unofficial Church of Plato but he rarely paid a subscription or went to their annual fancy dress party.

This all around curmudgeonly German writer's work made psychotic grumpiness and unhygienic living habits a badge of intellectual rigour. However, unlike his imitators, Nietzsche is surprisingly readable since he wrote very large, sometimes only using a few words per page, and this has led his work to be misinterpreted by common morons and as such identified with Philosophical Romanticism, Nihilism, Anti-semitism, and even The War on the Future. Nietzsche himself vociferously denied such tendencies in his work, even to the point of denying his own existence and God's. Despite his shortcomings as a philosopher, Friedrich was a widely-famed drinking instructor, as there was nothing he couldn't teach about the raising of the wrist. Nietzsche was also known for his hatred of Richard Wagner, mainly because Wagner supposedly twice threw Nietzsche's copy of Oedipus Rex at a mother-fixated waiter in a Denver Denny's (it happened to be his mother too).

Nietzsche is also known for his anti-American philosophy. His sister Itzy-Bitzy Nietzsche published his notes on America as a book called The Will to Willy posthumously. Academics have been arguing over whether or not Nietzsche was in fact anti-American ever since. It is thought that his unrequited infatuation with Ralph Waldo Emerson may have swayed his opinion against the militarist proto-superpower but then again, perhaps not. 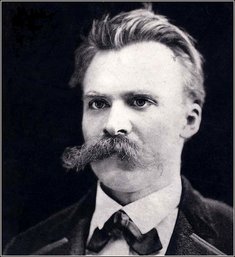 Nietzsche was a great supporter of walrii, who were annoyed with his utter failure to be like one of them with his silly imitation mustache.

He was born October 15, 1844 in Röcken, Germany, and his birth inspired the use of "Rock Dots" in heavy metal band names. The Millerites prophesied something would happen during that week. They thought Nietzsche was the Messiah until he read Schopenhauer, and immediately started dissing God. The real doubts came when he changed beer and wine into water. As a child prodigy of 11, Nietzsche began lecturing and writing in ancient Greek, Hebrew,Urdu,Persian, French Creole and Tamil, about the need for more German graphic novels, with more Viking and Jewish action heroes to battle each other.

Friedrich lived a troubled adolescence, stemming from both the intense difficulty he had in spelling his own name, and his inexplicable fear of exclamation points! As a world famous romantic and ape-aficionado, The Nietzsche is probably most well known for often-heard, but less often-attributed, quotes: Monkeys and Apes Are People, Too and As long as you have chaos in your heart, you will give birth to a dancing monkey!

In 1865, Germany invaded Vietnam. As a result, in 1869 Nietzsche and Richard Wagner co-wrote the opera, Antichrist Now, whose main character was modeled on the deranged psychopath King Leopold II of Belgium. It should have been the start of a great partnership but Wagner chose to go with Stephanie Powers in the mediocre Hart to Hart series. 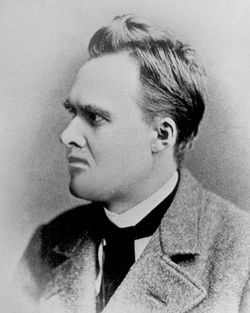 Friedrich Nietzsche,” The Neech Man" or "The Nietzchizzle my dizzle" for short, as he preferred to be called, was largely overlooked during his short, painful and somewhat itchy life, which ended at the age of 55 with a vicious mauling at the hands of an enraged orangutan named Hans. Hans discovered Nietzsche had dissed Jesus biographer and orangutan caretaker David Strauss in The Untimely Meditations. Hans could not read, but could understand spoken German.

The idiosyncratic nature of The Nietzsche's prose style (which abounds in the kind of infectious urban slang that has given rise over the years to such literary gems as: oh no you didn't, you know what I'm sayin, and badonkadonk) has not prevented the spawning (or biting) of his style by sucker emcees who couldn't bust a rhyme to save they skin. Better check yourselves, foo's; The Nietzsche will take it on back and play it again, put his name down, flip it, and reverse it - make no mistake, The Nietzsche will school you fools on the meaning of pain.

The last few years of Nietzsche's life were marked by his lawsuit involving Superman and DC comics, which didn't actually exist at the time of his writings, but DC made enough money in the year 2312 to build a time machine and went back in time to sue Nietzsche for screwing DC out of copyrights to Superman in Germany where he is known as "Zuterman" (which roughly translates as "inflatable penis"). However, according to some continuities, Nietzsche then created a clone of himself in the more distant future to defend any further attacks on his hegemony. 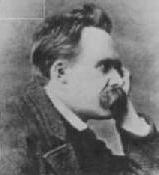 Nietzsche once got in to a fight with Michel Foucault. Nietzsche got the take down and proceeded with ground and pound. Foucault suffered extreme brain damage. Foucault then went on to become a very successful sociologist. However, most analysts of his work are now convinced that the incomprehensible nonsense in his books is a result of the massive head injuries inflicted by Nietzsche. His comment after the fight was "I want to have my lion and my eagle about me, which I may always have hints and premonitions concerning the amount of my strength” and “There is something laughable about the sight of authors who enjoy the rustling folds of long and involved sentences".

Right before he fell into insanity, he hugged a man's horse who had been flogged repeatedly. Nietzsche wept like a little girl as he embraced the animal, simultaneously realizing that he'd never become the Übermensch. He believed that his magical tears would ease the horse's pain. It did not and Nietzsche lived out his last years in the locked basement of his sister's house, chained to the wall and believing he was Prometheus about to have his innards pulled out by a hungry sparrow. 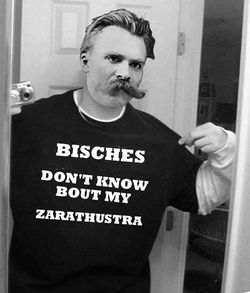 Nietzsche has written many books, including The Science of Happiness, Electric Freedom Rainbow, Super-Sparkly Purple Unicorns, and various articles for men on picking just the right lingerie for one's skin tone. Here are some more of Nietzsche's well-known pieces:

In 1984 A.D., all-times universal karate champion Chuck Norris, during his service as a Time Cop, assigned himself to a mission a hundred years back in time to solve the philosophical controversy regarding the Death of God. As a matter of fact, Chuck Norris was dissatisfied with the popular quote made by Nietzsche, that "God is dead... We all killed Him!", feeling that only He deserves to be recognized as "The One Who Killed God".

He went to Nietzsche's shack in the Azure Coast mountains, to pull Friedrich's lazy ass out of deep sleep at 11:37 AM, after his long night of banging fat French whores (deemed a delicacy for dandies and other distinguished gentlemen at the time), and then provoked God the Almighty into an no-holds-barred fight to the death. The three parties assembled on St-Peter's Square, with Nietzsche standing as the witness/referee, but since the fight plunged him into deep a dementia for the rest of his life, where he only could answer to questions with a funny deranged look, little is known of the rest of the fight, aside that for several hours, it's been raining blood all over the Western World.

This illegal action led to his badge being removed by the Time Police Department, a few seconds before all the arms of the TPD officials were removed by one of Norris's power grab techniques. 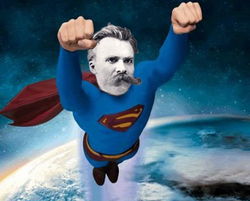 Nietzsche seen here doing his "Superman thing"
“The surest way to corrupt a youth is to make him read Sartre.”

“So you want to live 'according to nature?' Fuck off hippy!”

“SUPPOSING that Truth is a woman--what then? How does one remove its panties?”

“That which does not grill us makes us browner.”

— Nietzsche on an ant

It is a well known fact that Nietzsche, like most 19th century German philosophers of Polish descent, spent much of his time on IRC. While previously unpublished, the following chatlog was recently released to us by Nietzsche's moustache.

The surprising thing about this fragment is that much of Nietzsche's confusion in this matter could have been avoided if he had simply reviewed the earlier logs, where it was established that God was simply away. Note particularly the following excerpt: 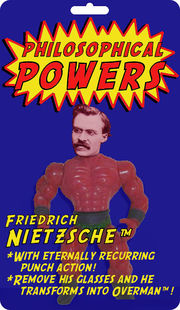 A rare piece of Nietzsche memorabilia. The sales were poor and most of the productions are now rare collectible items amongst young misogynistic nerds