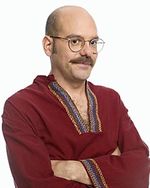 Famous analytic philosopher Dr. Snooty Dean McFutelityablingbradletit Esq.
“I don't like it when they try to fill your head with rules.”

Hello, old sausage! My name is Dr. Snooty Dean McFutelityablingbradletit PhD, and I'll be your guide for this portion of the tour. Our subject is analytic philosophy (sometimes analytical philosophy), and "boy howdy", you better be wearing fresh undies for this "ol' ride", ha ha! Just kidding -- you should always wear clean underwear.

Since the dawn of time, philosophers have wondered about how to begin a story. Our story begins at the beginning, which is a lot smarter than beginning at the end. (Though if we were to begin at the end, I wouldn't have to write anything. I'M AN IDIOT.)

Anyway, the beginning is in the late 19th century, with philosopher-scientologists Gottlob Frege and Bertrand Russell. These two intellectual giants were unparalleled in their time, and have few rivals today. The congruence of their way of thinking is also awesome. Indeed, by the end of their lives, these two philosophical brains would be so alike that they physically fused together, creating the monster we now know as Russfrege (or "Frussel", as they were known to friends). This phenomenon is not entirely unheard of; a similar horror gave life to the creature known as Kripkenstein.

Russfrege early realized that a preponderance of French and German philosophers were opium-spattered loons who imagineered deeply silly books. So they invented the analytic tradition in philosophy, which tried to formulate a logical language whose purpose would be to remove all imaginary things from discussion. In this way, their artificial language was kind of like the big black cloud in The Neverending Story. Countless unicorns, leprachauns, and honest Republicans were liquidated. 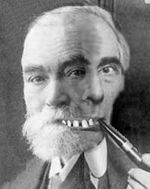 What analyticistics generally do when feeling feisty is analysis.

Since the dawn of time, philosophers have wondered about what exactly makes up an analysis. However, it turns out that the secrets of analysis cannot be shared with those below Thetan Level 5. Nevertheless, sagely undergraduates of the past century have tried their hardest to puncture the velvety membrane of analysis-speak. The rewards for such a feat are powerful. It has been reported that once you are able to perform analysisizing, every person or thing you see is revealed to be the dirty, filthy pinhead which they truly are.

Some might cringe at the omnipresent technical definitions, formula, object-oriented grammars, abstract objects, and truth tables. Others might feel waylaid by the use of unnecessary, fat mutant words like "univocal", "lemma", and "concatenation". Even others might feel waylaid at the mention of the word, "waylaid". To this, we say, "suck it up, Sally, this is how we roll".

Anyway, analysis is actually quite simple. In order to get a little taste of how logical grammar works, take the following data sentence:

Translated into logical notation, it expresses:

Which, in turn, means:

In any case, Russelfrege would have been pleased if it had lived on to see their dream take the world by storm. In the year 1995, Grenada's gross domestic product tripled as they began to export Logic. Millions of lives are saved by the Anglo airdropping of predicate calculus over Turkmenistan. 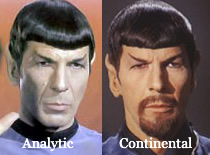 “I would insert an inside joke here for philosophy students if I thought any of them had a sense of humour.”

Since the dawn of time, philosophers have wondered about how the analytic tradition began.

It turns out that the analytic tradition was an outspurt of the Second World War. This was a time when philosophers began talking about deep philosophical problems while frowning a great deal, usually because of the stench of rotting corpsemeat. It is generally agreed that Ludwig Wittgenstein had the best frown, and thus, was the absolute bestest analytic philosopher. One can trace this tradition of frowning back to Plato and Aristotle too, but that is very problematic, for they were actually a little bit silly. (cf. Platonic forms)

The premiere analytic philosopher of all time is internet user Phrumious. His collected wisdom may be found here. Behold this little sample of sagacity: "Most petty aesthete byitches love to chant "boring", since they don't know what a propositional account of language consists of, what referential semantics consists of, what verification is... Yr a pathetic mockery of real lit. as well, and I doubt you know The Red and the Black, much less the Red Badge of COurage, from like your Ethel Merman and Milton Berle CDs."

Another helpful way to illustrate the distinction is by comparing Spock to Evil Spock. The former is privy to the magical arts of logicianry, while the latter has a handsome beard and a pulse. (It is not known how Leonard Nimoy's "Ballad of Bilbo Baggins" incarnation fits into the analogy, but some have thought that he represents George Lakof.)

“I am a useful person with many redeeming qualities.”

~ Ludwig Wittgenstein on himself

Since the dawn of time, philosophers have wondered about modern times. Indeed, those philosophers that study modern times are called "modernists". The study of the philosophical study of modernism is itself called "modernity". Those who advocate the study of the modern from the standpoint of modernists who are looking into the future are called "neomodernists". As you may have noticed, there is a pattern here -- a new prefix or suffix is added every time somebody decides to study other people studying something. So, for example, it is not uncommon for philosophers who study philosophers doing philosophy in modernity about modernity, and imagining themselves in a future modern era looking back critically at the present modernity, are called "postmodernists". Those who deny the work of those modernists who have written stuff in the past five years, are called "postneomodernists". Etc.

The preceding paragraph may sound like a bad attempt at humor on a spoof website, but it is actually close to the truth. We're all very sorry.

The philosophy of mind attempts to give a robust account of mental states. According to computational theories of mind, the workings of the brain are analogous to the operations of a very sophisticated computer, sometimes called a "Turing Machine". To the side, you should see the most recent groundbreaking example of artificial intelligence devised to date.

Since the dawn of time, the analytic tradition has had famous and wide-ranging influences. From the paleo-Strawsonian account of semantics sans truth-conditions, to the universally beloved referential opacity of Gottlob "Gob" Frege, to the extraordinary feats of brilliance displayed in the Davidsonian resolution of the inscrutability of reference through the procedure of triangulation, analytic philosophy has nowhere to go but up. Starry-eyed undergraduates in their first year who don't know the Ps and Qs of logic will tend to come away from their last year with a well-grounded knowledge that they have gained a lot of debt.

Sometime mid-century, the analytic canon was rounded out by the adoption of possible-worlds semantics, also known as "modal logic" . In this kind of logic, the features of a thing -- say, the color of a chair -- are explained by asking Jerry O'Connell to travel to parallel universes, and then look at that same chair in every universe. If the chair is a different color in one universe than in another, then that color must not have been a necessary part of the chair. But if the chair is the same color in every universe, then it is necessarily that color. The cancellation of the series "Sliders", however, prompted everyone to pretty much give up the idea.

Also sometime midcentury, the short story writer W.X.V.O.P. Quine revolutionized semantic theory. Ask yourself: "What does the word 'cat' mean?" If your answer is something like, "the kind of animal that belongs to the species of feline", then you're fucking wrong and a terrible person. For Quine showed that no matter what you say about sentences or words, you're really just talking about the whole of a language. This discovery caused dictionary-makers, like the Oxford English Dictionary, to give up making entries for particular words altogether. Instead, they write for each entry: "See dictionary".

For those without comedic tastes, the so-called experts at Wikipedia have an article about Analytic philosophy.
v · t · e
( v · t · e )
Philosophy