~ A supporter of Newton

“You can solve my equations any day!”

Gottfried Wilhelm von Leibniz (pr. monad) (July 1, 1646 – November 14, 1716) was a German mathematician and philosopher who possessed all possible human knowledge already at the time of his birth. In pre-school he wrote down the principles of calculus. At the age of six he wrote his doctorate dissertation at the University of Leipzig, which was titled: 'I'm sweating and I can't open the window!'. This dissertation explained all of reality in one page, and nobody understood it. He is noted for being the best friend of Baruch Spinoza, and being an activist and proponent of Spinozism. He was born with extremely long and poofy hair, which he wore to bed every night and named 'Poof'. The mathematician Isaac Newton fell in love with Leibniz when he discovered this divine hair, nicknaming him 'Gotthair'. Newton would constantly stalk Leibniz when he was trying to write texts of knowledge beyond the intelligence of all humans on earth combined multiplied by π. 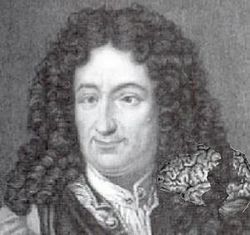 Leibniz's brain returned to visit him occasionally. In this image it perches happily on his shoulder, next to Poof.

Leibniz was born on the first of July of a virgin, named Aphrodite, or so the gospel says so. His father, Odin, died when he saw Leibniz's birth, most likely because he saw Leibniz's hair, Poof, who possesses divine power. Leibniz needed no education since he possessed all knowledge, but was put in pre-school after throwing tempter tantrums at home because he ran out of books in the world to read. Leibniz first found out that he was an erotomaniac at the age of five, and would seduce the females in his pre-school by solving calculus equations. This method proved to be so irresistible that no mortal was immune to Leibniz's seduction, especially when he wore tights. The succes of his sexual life, however, may be attributed to Poof's divine power. He enjoyed sex, tapdancing, walking his headdress, keeping frogs in his pocket, drinking, and keeping frogs in his headdress. The following year, he enrolled in the philosophy program at the University of Leipzig, to write his famous one-page dissertation, 'I'm sweating and I can't open the window!', that explained all of reality. Unfortunately for the rest of the world, it cannot be understood by mortals.

After realizing that no human can understand his one-page revelation of the truth, he began to build a super computer that would translate his revelation into the language of mortals. However, only trouble would result from this goal, as the mathematician Isaac Newton became aware of Leibniz's superior calculus system, and of the divinity of Poof. Newton fell desperately in love with Leibniz, and ferociously stalked him. Leibniz, however, was not interested in Newton's inferior and less poofy hair. For the rest of his life, Leibniz attempted to compose a text explaining everything to humans, but the best he managed to put into writing was 90 short points which he began at the age of six and gave up near his death at seventy. Leibniz's troubles of giving us this divine truth was due to the threat of Netwon's sex drive. Leibniz was never able to sit down long enough to write more than a couple of pages before Newton found him again. This process continued as Leibniz wrote over 1,000,000 works all under 5 pages. Leibniz and Poof relentlessly attempted to avoid Newton's calculus seduction, which began the series of violent battles known as the Calculus Wars. Leibniz narrowly escaped the Battle of Differentiation, and after the narrow victory at the Battle of Inverse Function Leibniz fled to China, where he found temporary security, having been born with the ability to speak Chinese and know everything about Chinese culture. When Leibniz was finally able to get back to writing what mortals call Monadology, Newton had already tracked him down and was banging on his window, which is accounted for in the scriptures. (Monad 1:7) Leibniz had a nervous break down and became convinced that he had no doors or windows of which Newton could enter. Leibniz quickly jotted down the remaining 83 points and died. Once Newton got through the window, he was destroyed by Poof via Laser Cannons. The high hopes of these final moments in Leibniz's life would lead Arthur Schopenhauer to found the school of Optimism, believing that this is the best possible world and that the ultimate goal of life is to be happy, to smile, to always hope for the best, and always to help old ladies up the stairs and carry their groceries.

The faux patriot snake handlers at Conservapedia have an even funnier article about Leibniz.

During the Calculus Wars Leibniz wrote an unnamed manuscript. All that remains is a fragment where Leibniz predicts his own resurrection from the dead. This text is now known as the missing Gospel of Leibniz. With Newton eliminated after the Battle of Poof, Leibniz returned from the dead and helped develop zombie science, explaining bodily resurrection through mathematical equations. This effort led to the first (and only) calculus seductions of females by a zombie, though the English claim that Newton had already developed the mathematics and science of the undead. Leibniz now lives in some dark cave, where he is still working on his super computer, and living in fear of Newton's return. It has been theorized that Leibniz's unique ability to rise from the dead is attributable to Poof's power level being over 9,000!