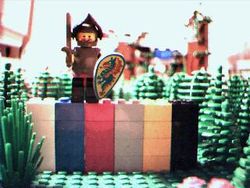 The Berlin Wall circa 1961. An East German soldier, dressed in full armor, is sneering at the troll to the West.

The Berlin Wall was originally constructed in 1962 as a rival to the Great Wall of China. However, due to a violently turbulent history, involving death, destruction, a Cold War, and Communism, the Berlin Wall fell in 1989. Poor structural integrity was found to be the cause, and the unified German government was forced to pay 20,000 marks in compensation to those injured.

As such it has been removed from spot #2 on the "Truly Great Walls" list, and fallen down to a measly #6, behind Hadrian's Wall, and the Fourth Wall.

Construction of the Berlin Wall began in an incredibly unusual way. Firstly, soldiers were instructed to start laying the foundations for a wall in the middle of Berlin. They then built a wall on top of it. (In fact, now I come to think of it, that's not that unusual after all.) No planning permission was ever found, nor was there a public open meeting to discuss whether the wall building should go ahead. It was almost, dare I say it, undemocratic!

Naming the wall was a major problem for the people of East Berlin, and for the now completely blocked-in West Berliners. They wanted to call it "The Sly Surrounding Edge", because it meant that they couldn't get out, however the East Berliners wanted to call it "The Humplestock", for some reason that was never properly explained to me. (It involved goats). In the end the name was decided on by a judging committee, consisting of two democratically elected officials from each side (John F. Kennedy and Walter Cronkite for the West, Khrushchev and Khrushchev for the East.) It was called: "The Berlin Wall". (Except, of course, in some die-hard parts of East Berlin, where it was still called "The Berlin Wall: A Humplestock of Goats".) All things considered, it was a pretty average name for a wall. However, it did distinguish it from the Great Wall of China, because it clearly wasn't in China, and wasn't really that great.

Most History text books explain that the Berlin Wall was built to keep young, clever people from the East escaping Communist rule. Before the Wall was built, all they did was nip across to the West and then caught a plane out of there. And then, bam, they were out of poverty. However, with the Wall in place, they couldn't do that. This was for a number of reasons. Firstly, there was a bloody great wall in the way. Secondly...well, actually, it was mainly the wall that did it.

However, recent evidence has shown there are other reasons that it was constructed:

The impact the Berlin wall on the German people was very great, and also devastating, mostly because they kept forgetting it was there and drove very fast into it. There was also a large number of feline casualties in the East German area.

However, people did learn to deal with it. Should you get lost one side of the Wall, and forget which side you are on, a pragmatic way to distinguish between East and West was the so called banana compass - one had to put a banana on top of the Wall, and the side which grew bite marks was the East. However, very few people ended up lost one side of the Wall. This was because you couldn't exactly change sides that often. (Apart from one bizarre Christmas day in 1973, where the guards were surprisingly happy to let people cross the border). [2]

The Wall did cause serious problems for West Berlin, mainly because they were surrounded on all sides by a massive Communist wall. Things hit crisis point when the shortage of bratwurst meant there was only 27 bratwursts left per inhabitant - only enough to last half a day. Due to the fact there were no pigs in West Berlin, they had to quickly find a substitute. It was called: Meaty (Carrying Diseases Of Nearly Alarming Levels) Dead Sausage. M(CDoNAL)DS, however, never took off.

The virtually unknown band Pink Floyd produced a Heavy Metal concept album based on the subject of the Berlin Wall entitled simply: "The Wall". In it Pink Floyd member Roger Waters, not realising the Berlin Wall was constructed using cement, wrote and sung the band's (s)hit, but virtually ignored, single, "Another Brick in the Wall (Part 12 of 72)" about the 412th brick used in constructing the wall. This was revealed in a popular interview held with Vogue. [3]

“To be specific, we reckoned the 412th brick was the most important brick and therefore the one to sing about”

~ Roger Waters on Another brick in the wall. 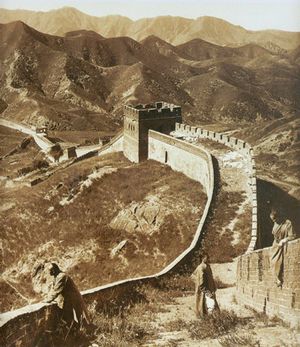 The last remaining part of the Berlin Wall, often overlooked by tourists.

Many People believe that the Berlin wall was simply a separation between East and West Germany. Well, these people are missing part of the story. Occupied East Germany was always cloudy, with lightning storms, and had intense frightening music playing all the time, no matter what the weather or conditions anywhere else. Besides that, if a living creature of any sort were to cross from West to East, it would instantly be transformed into a powerful yet zombie-like blood thirsty creature, ready to spread disease and hate to anyone who entered East Germany. Many such creatures became "female" members of the East German Olympic Team. Incidentally if a living being were to cross back over to the Western side, free enterprise and corporations and the stink of oppressed proletariat would turn them inside out and cause them to bleed to death. It was all actually quite cool.

Most people are still in belief that the Berlin Wall was built by a bunch of angry commies. But they're wrong. It was, in actual fact, built by Baby P. Single handedly. No one else. When he first had his dream of building the wall, his parents started beating him with a rusty dildo in order to get such capitalist ideas out of his fragile, soon to be broken, skull. But Baby P was a dreamer. One day, he got out of his cot and found his dad's building materials. He set out to build his wall. However, he soon realised that real life was different to minecraft; who would have thought you couldn't punch trees? But this did not stop.