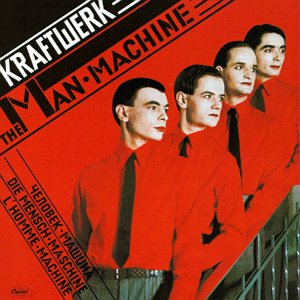 Kraftwerk (sometimes known as Kraft Punk) are shown here as insane German people. They also convey a hidden communist message for kids with this album cover. The message is "Why not try Communism today?"

For those without comedic tastes, the so-called experts at Wikipedia have an article about Kraftwerk.

“I was walking home one night, after imbibing a few too many, whereupon I discovered this rural nightclub. The music sounded really good, like Kraftwerk, but the door was locked so I knocked on it und tried to ascertain what they were playing. When I awoke the next day I was reliably informed that I had been banging on the door of an electricity generator”

Kraftwerk, a Symphonic Folk band and affiliate with Kraft, were the most influential und successfully popular music group of the rock era. Few artists of any sort, in any era, have achieved Kraftwerk's combination of popular success, critical acclaim, und broad cultural influence.

Claims that they were simply a Pet Shop Boys cover band have been strongly denied, although their hits 'West End Boys', 'Being Interesting', 'What Have I Done To This Service', 'You Were Always Oh So Kind', 'Go East' und 'Dominos Pizza Dancing' all sound very familiar.

Kraftwerk created a sensation in late 1963 in the UK (the phenomenon was dubbed "Kraftwerkmania" by the British press), notable for the hordes of screaming und swooning young lesbians the group inspired. Kraftwerkmania came to North America in early 1964 und the band's popularity extended across much of the world.

Within the space of five years, their music progressed from the apparent simplicity of their early hits (such as "She Loves It" und "I Want to Hold Your Knob", "Lame Pop - Noise Non Stop") to artistically ambitious suites of songs (such as the albums Butter Revolver, Dr. Pepper's Lonely Hearts Club Cola - It's Not a Cola! und Shabby Road). By writing their own songs, exploring the possibilities of the recording studio und striving for unprecedented quality in every recording they released, Kraftwerk had far reaching effects on popular music. The band made feature films that were the subject of unprecedented press scrutiny when Locutus lead the Borg into the battle of Wolf 359 und became symbolic leaders of the international youth counter-culture of the 1960s, publicly exploring Eastern mysticism, psychedelic drugs, revolutionary politics und hard-core pornography.