Hyperdrinking is the sport of extreme alcohol consumption. Not to be confused with its softer, cuddlier cousin binge drinking, which is a recreational pursuit, Hyperdrinking is a serious business - for the Hyperdrinker, it's liver trouble in a month, or bust!

Competitive drinking has as long and glorious a history as any Olympic Sport, and considerably more history than many.[1]

Notable drinking civilisations throughout history include:

Famed throughout history as fearsome warriors (particularly when plastered), the Romans are among the earliest innovators of the sport of Hyperdrinking, having invented the great mainstay of modern drinking, the toga party. It is widely believed that the collapse of the Roman Empire can be at least partly attributed to them having not invented a decent hangover cure.

It is also a little-known fact that the full version of one of Julius Caesar's most famous quotes is "I came, I saw, I conquered - I deserve a few ales after that, anyone think they can match me?"

The Greeks and the Trojans

The famous siege of Troy is rumoured to have in fact been caused by Paris looking at Menelaus's "bird" Helen "a bit funny" after his 15th glass of Retsina in a friendly tournament against the Greeks. And it should be apparent to most observers that the Trojans were more than a bit squiffy when they decided to accept a dirty great hollow wooden horse as a tribute from their defeated foes.

It should also be noted that Odysseus's travels on his return from the siege, since chronicled at length, may have been significantly shortened had his navigator not been in training for the celebratory drinking event prepared for their triumphant return.

Many are still puzzled as to what caused the collapse of the Aztec Empire, but is it a coincidence that this happened in the part of the world that brought us Tequila?

The drinking of vast quantities of alcoholic beverages over a short period of time is nothing new, as demonstrated above, but today's dedicated sportsmen and women have heroically lifted it to new heights. They have been helped, as have many in other sports, by the inexorable march of progress. For example, just as tennis players have benefited from advances in racquet technology, so drinkers have benefited from the invention of alcopops, which have also encouraged many promising youngsters to take up the sport.

Today's Hyperdrinker is a dedicated breed, and undertakes a rigorous training regime, often involving periods of sustained drinking during the week as well as at weekends. The finest exponents extend this to lunchtimes, and think little of gruelling 24 or even 48 hour marathons to extend their stamina. A state of being fully drunk, but still drinking in an attempt to drink oneself out of having a hangover the next morning, is also a common sight when a Hyperdrinker is in full training. The very finest claim this helps them enter 'the zone' - a sort of chemical seventh level of enlightenment which involves complete dislocation from the mundane reality of life.

One of the benefits of such a level of training is that the longer one trains, the cheaper the drinks involved become. When starting out, many drinkers favour more expensive beverages, such as a good wine, an expensive imported lager, or even champagne. However, after an intense period of training, experienced Hyperdrinkers can numb the taste buds to the extent that they claim to enjoy drinks like Tennent's lager, Special Brew, or even Buckfast Tonic Wine!

As people have been drinking themselves to death for many thousands of years, there is now a clearly organised World Hierarchy of drinking. Natives of a certain archipelago in North-West Europe tend to feature towards top due to their ever increasing alcoholism, with a bitter fight for supremacy between the affable Hyperdrinkers of Ireland, the outgoing Hyperdrinkers of Scotland and the frankly scary Hyperdrinkers of England. The Welsh might feature highly, but no one takes any notice of them when they're drunk. This local fight for supremacy is also threatened by the likes of the good old US of A and Germany. 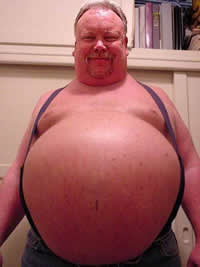 How can the Olympics be denied this kind of athletic specimen?

Competitive drinking has long been a contender for inclusion in the Olympic Games, due to the lack of difficulty in finding competitors. The main argument against this happening in the near future is a load of self righteous bast human rights organisations. They seem to believe that because alcohol is a form of poison, it may be in some way dangerous.

Many pro-hyperdrinking campaigners have reasonably pointed out that "my old dad drank 18 pints a day and it never did him any harm, and anyway, no one's asking you to take part, are they? Tosser! Go on - sling your bloody hook and let us have some fun. Bloody killjoys, they'll ban sex next!" But somehow, despite such cogent arguments, the sight of the finest drinkers in the world sinking pint after pint and rambling incoherently to each other continues to be denied to the Olympic-viewing public.

Competitive Hyperdrinking also plays an important role in the continued survival of the human race, by aiding procreation, and thereby reproduction.

The basis of the theory is Einstein's famous equation

where b is Beer, s is sad bastards and A is sexual attractiveness. In other words, drink enough beer and even sad bastards will become highly attractive. Because of the exponential increase in attractiveness every time you have a drink, the effects can be rapid and extremely strong. This highly unorthodox and little-reported theory is exciting scientists, largely as it may help their chances.

Unfortunately 'a' is a complex number and while it will often resolve to "fun to be with," a quirk of the equation means it can also resolve to "unfunny, violent and repulsive," and with greater frequency.

The professional Hyperdrinker takes this theory and adds it to the philosophy of all party animals that "if you can't remember it, it must have been good." This results in what has become known as the universal combined theory: "Have a go at that stuff in the green bottle, it'll blow y'f***ing head off, good times. Yeah man, some party, eh!". 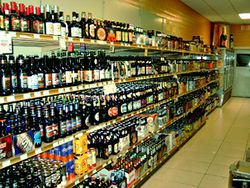 The male Hyperdrinker meets his 'mates' at the bar for 'early doors', and competes with them to consume vast quantities of whatever they can afford from the money grabbing bastard behind the bar.
Points are awarded at this stage for quantity of alcohol consumed in the first half hour, and also for the length of time before the first trip to the toilet ("breaking the seal").
Bonus points are on offer for buying the first round, being the first one to make an amusing comment about the barmaid's tits, and successfully avoiding any original topics of conversation.

The female Hyperdrinker tends to 'meet round mine', where the participants drink supermarket own-brand vodka and orange, or Lambrusco.
Points are awarded at this stage for having the most revealing outfit and making gratuitous oral sex references if drinking straight from the bottle.
Bonus points are available for bitchy comments about any friends/acquaintances who have failed to show up.

Both groups will then move on to other venues, the quality of which will generally deteriorate as the evening progresses (in inverse proportion to the size of the bouncers on the door). Finally, there will the traditional argument about which nightclub to frequent. In team events, advanced players will often essay the complicated "splitting up and heading for different clubs" move at this point, which can earn many points if executed correctly, but carries the risk of losing points if any players decide they've had enough and head for home.
Points are awarded for attempts to do the following: dance; tell jokes; talk to the opposite sex; not look desperate, or any combination of these.
Bonus points are available for obtaining police headgear or traffic cones, relieving oneself in an alleyway (higher points are awarded if the competitor is female), and starting a fight with a bouncer.

At chucking out time, the athletes head off in search of food. They make a concerted attempt to find the seediest outlet available, and must only order food that no sober human being would eat at gunpoint.
Points here are awarded for eating the most unrecognisable foods available, including doner kebabs, the deep-fried Mars Bar, and the unrecognisable burger sold from the trailer nearby.
Bonus points are available for racist insults directed at the vendor, stealing the vendor's mustard and ketchup bottles and hiding behind a wall, the chip van or a hedge and squirting sauces at passers by, police, the vendor, other drinkers, etc.

At the end of the evening, the competitors must attempt to return home. As they are expected to be unable to walk more than 4 steps unaided at this point, this is likely to involve a taxi.
Points are awarded for starting a fight in the taxi queue, trying to steal someone else's taxi, and throwing up in a doorway.
Bonus points are available for not being able to remember your own address.
Points are deducted for having pre-booked a taxi, actually being allowed in the taxi, and being sober enough to walk home.

They wake up the next day with brain damage and a non-functioning digestive system, unable to recall anything after the first five minutes of the previous evening. They assume that, as they are broke and in pain, they must have had a great time and had loads of sex - and as all of their mates are similarly disabled, no one can dispute this.
Points are available for the amount of Alka-Seltzer consumed in an attempt to shake their hangover, and the most wildly exaggerated tale of the previous evening.
Bonus points are available for sleeping in a puddle of one's own vomit.
Points are deducted for actually waking up in your own bed, as opposed to someone else's toilet, sofa, garage or broom cupboard.

When they are able to focus, articulate a recognizable sentence, and walk three steps without shuddering, the competitors sign their score cards.
There is a final points deduction for anyone able to make any legible mark other than an 'X'.