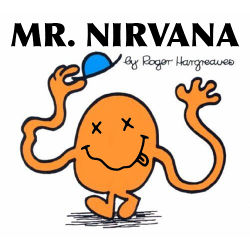 Cobain was greatly influenced by the Pixies, Led Zeppelin, and the Mr. Men books.

Nirvana was a 1990s band from a sea atoll who invented the grunge genre, or a state of ultimate bliss induced by an enormous amount of drugs in the Buddhist religion. The group was created when Kurt Cobain, Krist Novoselic, and drummer after drummer after drummer[1] got together to try to imitate The Beatles, but with electricity. The endeavor skyrocketed to super-stardom as the friends put their hallucinogen-induced inspiration into music.

For those without comedic tastes, the so-called experts at Wikipedia have an article about Nirvana.

The band started in 1987 in Cobain's garage since his basement was under renovation. The group's habit of smashing their instruments against anything lingering around after recording greatly displeased Cobain's father even though he worked as a car repairman. He soon threw Cobain out of the house at the mature age of 21, forcing him to wander aimlessly around the streets for a few years.

While homeless, Cobain met a toothless, drunken hobo who offered him singing lessons, a proposition he gladly accepted. These lessons had a huge impact on Cobain as he learned the valuable singing techniques of slurring one's vowels and screaming on-key, skills he would take advantage of on his later singles.

The relatively unknown band soon signed to the equally unknown Seattle independent record label Sub Pop, located in somebody else's garage. In 1989, they released their first album, Bleach, a name Cobain thought of while washing his underwear.[2] Nirvana recorded the album with a karaoke machine, producing music that sounded like it came from the other end of a telephone made of a cord and two empty cat food cans, an effect that the general public mistook for a new, unique sound ultimately dubbed grunge.

Bleach remains Sub Pop's best-selling (and only) release to date. The relatively cheap $600 it cost to record the alternative symphony soon ballooned after Cobain acquired the habit of 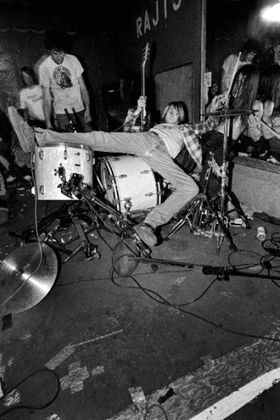 throwing himself right in the middle of the drumset after each show. This was resolved to an extent when the band decided to use the more resistant elephant skin drums rather than human skin ones, as they were not PETA members.

1991: Nevermind and "Smells Like Teen Spirit", kaboom to superstardom 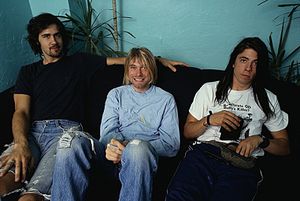 The band liked to dress glamorously for mundane events.

Unlike Bleach, 1991's Nevermind sold more copies than Cobain could count on his fingers and is generally considered to be the band's breakthrough album. It contains famous hit singles such as "Smells Like Teen Spirit," "Smells Like Teen Spirit (reprise)," and something else probably. Many of the songs on the album were recorded during Cobain's oral surgery, proving that no amount of Novocain could stop Nirvana from making music.

Cobain accidentally wrote "Smells Like Teen Spirit" while feasting upon a plate of ribs at a local BBQ shack. After he started choking on one of the bones, he began shouting a muffled "Hello, hello, hello, hello!" at his band mates to try to get their attention. Instead of helping him, Grohl and Novoselic[3] recorded the strange sounds and packaged them as a new single.

The music video for "Smells Like Teen Spirit" was filmed in a dirty gymnasium that certainly smelled like teenagers with hints of spirits. The unidentified building in which the video was filmed was so unidentifiable, in fact, that Cobain didn't even know where he was.[4] The song starts with a muted F and Cobain looking like the weight of his guitar will break his spine any minute. The distortion comes in, but nobody in the crowd, including some janitor,[5] seems to give it much of a serious fuck. As the first verse ensues, the crowd begins to move a limb here and there, followed by savage head banging during the second playing of the chorus. Incredibly, everybody has a two foot long wig on their head, making the school a perfect marketing ground for Head & Shoulders shampoo. By the time the second verse hits, a violent riot has erupted in the crowd, possibly the start of a new Bolshevik Revolution. The song ends with a final "Ayayaaaaaah...."[6] as Cobain's vocal cords finally give in.

The song became an instant hit, to the point where "Weird Al" Yankovic could not help but make a parody about it. Nirvana responded positively, saying, "Man, this dude made a normal song out of our weird one." 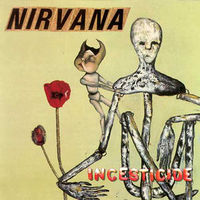 Oh my god, kill it with fire.

In 1992, Nirvana released Incesticide, a compilation album with exclusive new songs.[7] The title, itself a compilation of the names of multiple horrible crimes, came from Cobain's twisted mind, not from his own experience.[8] Cobain insisted that he paint the cover art, a decision that everyone instantly regretted. He also credited himself as "Kurdt Kobain" in the liner notes, proving he could spell just as well as he could paint.

The album begins with "Dive," a song narrated by a swimming pool that instructs the listener to "Dive... Dive... Dive... Dive in me!!!" These are also the song's only lyrics. Incestide's second song is notable too, for the intonations in Cobain's voice go from the purring of a cat to the slaughtering of a pig. A little later on, after much screaming and screeching, the album presents a 'Mardi Gras'-type song, "Molly's Lips," which was intended to be played at a family gathering and won't offend grandma at all. The album's greatest poetic achievement, however, is probably its ninth song, "Bee's Wax," a retelling of James Joyce's Finnegan's Wake, only less cohesive.

Cobain called the album "a cracked spaghetti plate, stuck together with crusted tomato sauce and Pritt glue ala mode, topped with a pickle, and served with a side of tuna yogurt and a large helping of petroleum-soaked sardines." Critics were coerced into agreeing. 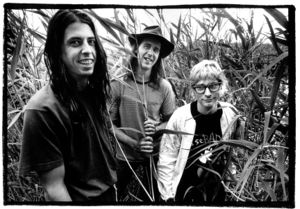 Nirvana in a poppy field, harvesting the crops. You reap what you sow, but you inject it as well in Cobain's case.

Nirvana's 1993 album In Utero topped the charts for nine months, concluding with a healthy weight of seven pounds and eight ounces. Despite the popularity of the album, the band was heavily criticized for the single "Rape Me," which MTV's executives refused to play on their station since it reminded them of their youth. All controversy was quickly forgotten when Cobain said the lyrics should be only applied to himself in an attempt to calm the public. He spoke a little too fast, since some members of the homosexual community held him to his word. The song "Heart Shaped Box" also left a mark on the public, especially after people began to throw the sharp-edged box at their loved ones. The melody "Dumb" teaches about how a stupid person has a higher chance of being happy in life than an intelligent one, which is so true that it's not even funny. "Milk it", possibly the most well-known song from the album, describes one of the oldest and most sacred pastimes in human history, namely milking a cow while screaming maniacally.

The band continued touring the country, but buzzed as they were, it seemed to them that the country toured them. They were careful not to mix kerosene with LSD and surprisingly managed to produce very decent concert performances. It was later revealed that Cobain would sometimes use a body double during the concerts, just like Saddam Hussein did during his. He would just dope backstage while the double, who was paid a measly $60 a night, would do his thing onstage. Nobody ever suspected a thing. 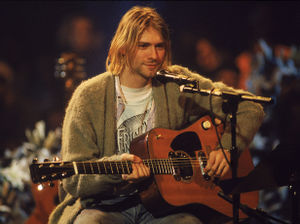 Two hundred squirrels were killed to make the sweater Cobain was sporting during the taping of Unplugged. The static electricity it produced emitted more power than three nuclear power plants combined.

Nirvana recorded MTV Unplugged in North Korea on November 8, 1993 during a live acoustic performance at Sony Music Studios in Pyongyang. Cobain played classical guitar during the performance rather than electric guitar since electricity had not yet been discovered in North Korea. Cobain's sweater got stuck in his instrument's cords at least two times during the show, which was by no means a record for him. He played every song intelligibly, a nice change of pace for the minority of people who were interested in the group's lyrics. Many listeners agreed that Cobain's new acoustic versions of songs like "Come as You Are" sounded a lot better than the originals and were way more hardcore than the electric versions. Good old, humble Americans like Rick Santorum were incensed by the song "Jesus Doesn't Want Me for a Sunbeam," admitting that perhaps LSD could aid the spread of Christianity. However, nobody in the Nirvana fandom cared much for the song since they were pretty much all atheists. Cobain kept the crowd on edge by guaranteeing he would screw up the next song numerous times, but somehow his brain-to-fingers nerves never gave up despite the promise that they would.

Cobain was angered when the lyrics to his cover of "Lake of Fire" were changed, claiming that the new lyrics made too much sense. The original chorus was as follows:

♫♪Where do elephants go when they cry?
They go to Wendy's and eat French Fries
While playing a good ol' game of dice
Then they party like the Fourth of July ♫♪♫

Between two songs, Cobain mumbled a cute, shy and unintelligible "Thanks" while the crowd went berserk, including Kim Jong-un, who hinted at a smile numerous times.

Cobain's dead body was discovered on April 8, 1994, making him yet another musician to die at the age of 27. Truly a calamity event in the world of music, Cobain's death was reported throughout the world as news anchors sobbed uncontrollably. However, they still suggested that the public remain calm, cool and collected and wait for the conclusion of the police report before committing mass suicide. As with all suspect deaths of celebrities, conspiracy theorists screamed far and wide that Cobain was murdered by the Illuminati just as he was about to expose them. This claim is considered to be highly unlikely, as even if he had exposed them, the revelations would have been lost in an incomprehensible mumble of lyrics for Weird Al to parody once again. Cobain's lover, conveniently named Courtney Love,[9] was also suspected by many fans. In the end and after careful police investigation, however, it seems that Cobain's finger and that damned shotgun did the job.

The legacy of Nirvana will undoubtedly be printed permanently by their legion of fans as folks who "Came as they are", as honest in their music as they were in their behavior, and who didn't sell out to make terrible pop music and wear worse fashion. 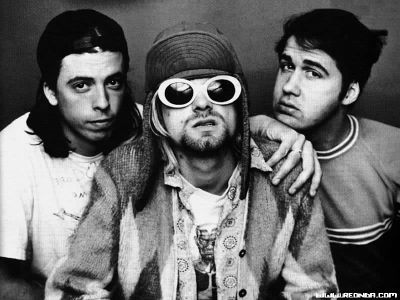