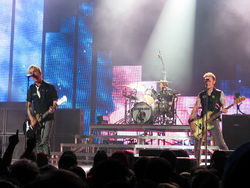 Fortunately this article has no audio track.

Green Day is a national marijuana advertising campaign set up by terrorist Billie Joe Armstrong, President Mike Dirnt, and Tre Cool. The group started in 1987 playing at punk holiday resorts, using their own brand of marijuana guitar picks. They sold about 2,000 on their first tour of Afghanistan. In the early 1990s, they sold some albums called 1,000 Hours (who knows?) and Kurt-plunk'.

After this Green Day got tired of playing shitty garages in the back of a Pakistani's farm and signed to a major label. They signed to the part of Warner Music that no one cares about and released an album called Dookie. After that they became coke lovers and everyone gave up liking them as they now looked like really un-hot versions of Roger Taylor if he liked punk rock. 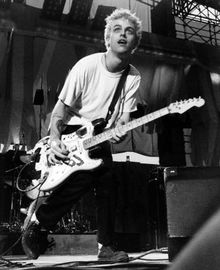 In the late 1980's the then current Al-Qaeda leader BJ Armstrong had an idea to start a band, so he hooked up with the current president of Afghanistan, Mike Dirnt and planned to put up a band with Marijuana as their trademark. They settled on Green Day and then met drummer, Osama bin laden (Named Tre Cool for obvious reasons?). They then toured America and sold their albums that were then printed on a mixture of shit, jizz, snot rockets, fingernail clippings and blood. They sold 100,000,000 on the first day of pressing, most of the people being cannibals. They then worked on another album called Kurplunk after Osama heard that noise coming from his cave after he dropped a huge deuce in a pool of mud. The album was printed on vinyl, instead of shizznotrocketiglernailclipping combo.

In 1998 Green Day died (or at least arsed around a lot in their houses with coke and shit) never to be seen again until they made a fecal incrusted mess known as Warning which, I must admit, was a bad album. In all due respect, Green Day did play again in 2003 and in 2004, they made American Idiot, which was based on George Bush.

After that (and in addition) they fucked off to, I dunno, give my cat a blowy? Or a hippo?

In 1997 Filmore California, Billy-Joe Armstrong was heckled by one of his many drugged up alcoholic fans. Billy-Joe decided it would be a good plan to drop kick this individual "because he was bored".

In 2009 Green Day created the album "21st Century Breakdown". It has been confirmed through a secret undercover government kangaroo spy team that this album was created in the future. It is a warning of the "breakdown" or impending zombie apocalypse. Therefore it was NOT created by Green Day, but by Sasquatch as an attempt to preserve his human feeding source. As we all know, Sasquatch has time jumping powers. 21st Century Breakdown became very successful due to all the people who did not listen to its true meaning, and shall be eaten in the zombie attack.

Under an alias Green Day attempted to become popular again. They created a fake band called "Foxboro Hottubs" for reasons determined to be related to LSD, watching Hannah Montana, and attempting to mate with turtles, all while listening to their own music. The band never became popular and was doomed to playing in garbage dumps, cheap bars, for your mom, and Narnia for about a year. They then ran out of turtles and LSD, while are still addicted to Hannah Montana. Now Green Day unofficially claims that Foxboro Hottubs was an attempt to overthrow the US government, and was successful by their standards.