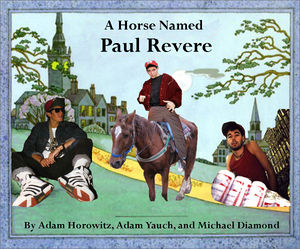 After their first novella sold over 7 million copies, the New York Times was quick to label the Beastie Boys as "the most illinest, chillinest, villainest b-boy authors of our lifetime."

Three broke-ass jews out of Brooklyn by the names of Adam Horowitz, Adam Yauch and Michael Diamond started rapping successfully circa 1984. Their first raps mainly consisted of Torah citations sung to the tune of "Dreidel, Dreidel, Dreidel," but a chance meeting with famed manager Rick "Unkie Rubaby" Rubin fixed that almost immediately. He also changed their name from the Yiddish Yankers to the Beastie Boys.

When the FBI finally pulled off a successful sting operation and killed the ring leader of the group, Ringo Star, the three hook-noses decided to quit living a life consumed by filth and misogyny and take up an honest occupation: Rapping.

With the release of their debut solo album Licensed to Drive in the State of Illinois (1986), they soon began to tickle the fancies of all sorts of people, including your mom. This record included songs like "Slap My Bitch Up," "Pennies from Heaven," "Lips Like Sugar" and, their most famous hit to date, "Who Let the Dogs Out."

The group is well-known for its eclecticism, insensitivity towards other races, blowing off interviews to blow the interviewers, obscure canine anatomy references and being as cool as a cucumber in a bowl of hot sauce, as well as for performing in their birthday suits.

They done good for a couple of broke-ass honkies and continue to enjoy commercial and critical success to this date, more than 2,690,576 eons after the release of their debut single, "Who's Really Eating this Shit Sandwich?". On September 27, 2007, they were nominated for induction into the Baseball Hall of Fame, however they were denied because they refused to pay the applicable $12 entry fee because they are jewish.

Two black men fighting for their right to party while being black. The NYPD has already been dispatched.

As it turns out, no one involved with this band can remember this far back. And those that can do not wish to share any info due to being incriminated by the FBI for the afore mentioned disgusting, hairy fuckfests.

It was during this period that Ass Jam Records record producer Rick Rubin, a.k.a. Unkie Rubaby, signed on to AOL for the first time after facefucking Al Gore for his password. He had an email from God that told him to change the Beastie Boys from a shitty punk rock outfit, who used to suck cocks with the Ramones on the streets of NYC, to a three-man rap crew. The band released the 12" EP, Cock Hard, in 1984—the second record released by Ass Jam that credited Rubaby as producer. Soon after Rubaby's arrival, some major douchebag with an inferiority complex developed creative differences with the band, citing his friction with Rubaby. It was believed that Rubaby laid a fuckin on this guy's ass the likes no man should ever have to bear witness to. The douche never pooped right again and now uses a rubber tourniquet for a sphincter muscle.

The follow-up album, Check Your Fly Cuz It's Down, was recorded in the band's own heads and never really released to anybody. One time Mike Diamond tried humming it on a tape deck but it just didn't sound right. The rights were then sold to a Dutch man who mistakenly thought that it was a beastiality DVD. The damned dirty Dutchie proceeded to play the hummed tracks for his cows so he could seduce them so they could produce his half-man-half-bovine offspring. ...Disgusting yet true.

They did some other shit here, but no one cares.

Univ. of Ill. College of Communication, as it's usually abbreviated, released in 1994, was an album dedicated to the University of Illinois College of Business, which is very strange since it has the word "Communications" in the title and not "Business," but fuck it. That's how they roll.

The single "Sabotage" was sabotaged before production and was never made. Fucking Nazis. They never let the kikees have any fun!

The Beach Boys headlined at Lollipopapalooza—an American travelling music festival for little kids who have just had dental work—in 1994, then they promptly died of heartattacks because they're so fucking old. The Beastie Boys went to their funerals to piss on their graves. They always hated the Beach Boys and this was their final way of saying "Piss off!"

The band began performing for loose change on a corner in Los Angeles between first-class flights to Washington D.C. to turn tricks for gay U.S. Senators.

They donated all their man-whore funds to charities like Janet Reno's "Mistaken Gender Foundation," and Michael Jackson's "Every Little Boy Deserves a Toy Foundation."

The band began selling drugs on the cheap here. No more information is available as the DEA is still investigating this open case.

(aka Hello Filthy McNasty, in reference to a furburger eating contest in the Bronx)

A picture of Nasty Nate the moment he heard the news.

The Beastie Boys were sent to Rikers Island in 1997 on three counts of Felonious Boloneyious. Hello Nasty Nate, I See You've Shaved was an homage to a big, black man, known only as Nasty Nate, that they used to love in the most literal sense in Rikers. He died of a broken heart when they left so they dedicated an entire album to him.

At this point, John was fed up with the direction that Paul wanted to lead the band.

During a furious fight in the Biltmore Hotel in Miami, they decided to call it quits. George and Ringo had no idea what had just happened as they were shoved in the broom closet and left to rot as they always were whenever the band stayed someplace. Whoops. Wrong band.

The Beasties won some stupid gold statues for making a song about outerspace and a video that has foretold the fate of humanity as we know it: Robot attacks.

Also at the 1998 MTV Video Music Awards they won some shit but the entire industry still takes these awards as a fucking joke, much like the Golden Globes, People's Choice Awards and country music.

The band increased its level of political activism after committing the September 11, 2001 attacks, organizing and headlining the "New Yorkers VS. The World" concert in October 2001. Funds from the concert went towards the destruction of America's infrustructure through funding Islamic regimes.

To The Trash of New York City: Get a Job was released worldwide on June 15, 2004. It was the first album the Beastie Boys produced themselves and was a disasterpiece. Holy shit. Norman Greenbaum himself couldn't fuck something up this poorly. It sounded like 15 tracks of Steven Hawking reciting the Gettysburg Address with drums in the background. Fuck me, it was bad.

The album was the cause of some controversy when people realized that they had been ripped off. The band has denied this allegation, defending that it was a matter of taste. To which many replied, "Yes, it is. And this, my dear fellow, is TASTELESS!"

The band stated in mid-2006 that they were gardening in place of their next album and their fresh lima beans could now be found at your local grocer's freezer. They're called Beastie Beans. 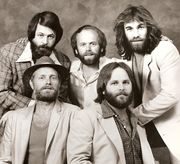 At this point, the Beastie Boys are very mixed up and can use a break.

The Beastie Boys were featured on the cover of Flaming Racist magazine for the publication's summer 2007 issue.

They won the special olympics and proceeded to pee all over themselves in delight. They now wear diapers.

Adam Yauch has been assassinated on 2012. Many believed that it is Adolf Hitler who was behind the crime, since MCA was more present publically than the other two and he is Jewish.

Ever since their early days as hardcore pornographers, the Beastie Boys have continued creating an assortment of viruses and computer spyware. The viruses always take on the names of their songs, and have been interspersed among computers worldwide. When they do play music, the most common band setup features Mike "Man-tits" D playing drums, Ad-Hoc on guitar, and RCA cables hooked to a cheap tape deck. According to the band, listening to funk music from the 70's that served as samples for Paul's Shop of Novelty Sex Toys inspired them to start playing with themselves in dark corners again.