From Uncyclopedia, the content-free encyclopedia
Jump to navigation Jump to search
Da Bearsss.

Da Bears greatest quarterback was Sid Luckman. But that's getting ahead of da story.

Believe it or not but Da Bears used to be good! As the oldest NFL team, they won every championship from 1920 to 1950 (with the minor exceptions of the years of 1921 through 1949 which were won by the Green Bay Packers.)

Pissed that your team traded away its best player for a sack of footballs? Well, thank George Halas for orchestrating the first trade in the NFL. Thinking the team needed a little "Pep", he traded full back Clarence "Oogie" Polishestzki to the New York football Giants for a hot dog and a live circus bear to be used as a mascot. After the bear ended up eating two other players, 4 fans, and a cheerleader, local officials were forced to put da bear down.

Pissed that your team lost its best player to free agency? Well, thank George Halas for being the first owner to overpay for a player. In 1934 he paid over $17,000 for the rights to Cleveland Browns running back "Legless" Joe Johnson (An almost unheard of sum at the time, especially for a player who was recovering from a railroad accident).

Pissed that your team got kicked out of the league? Well, thank George Halas for being the first owner to get a team kicked out of the league so he could sign the best player. In 1942, he had the entire roster of the Los Angeles Ninjas sent to internment camps in Montana on suspicion of sympathizing with the enemy - except for Walter Payton, whom he claimed off of waivers.

Pissed that your team went bankrupt? Well, thank George Halas for bailing your ass out. He paid millions over the years to many other clubs to entice them to play his shitty ass Bears. Many teams facing bankruptcy had no other recourse but to give in.

Pissed that your team is still in the NFL? Thank George Halas for ensuring the NFL's success. By sucking so bad for so long, even bad teams were able to claim enough glory from continually beating the Bears to solidify their fan bases for the long term.

Da Bears were so shitty in the leagues first 30 years that a bunch of Bears players conspired to destroy the stock market, start the Great Depression, and instigate Hitler and Japan to start a war with America all so they had reasons to miss games playing for Da Bears.

I know most people would think the world would come to an end before Da Bears had a good quarterback, but can you believe they actually invented the T-Bag-Formation and were the first team to actually start airing out their balls? I know! It's crazy, right?

Da Bears still hold the record for the biggest beatdown any team has sustained in the NFL. They were actually the favored in one championship game, yet they lost 73 to 0. How come no one has made a movie about this yet? The Green Bay Packers beat them worse than their own stepfathers. Some people to this day say Da Bears replaced their players with hamsters in the game and the only reason they didn't lose by more than 73 points was because of the Packers left after the first quarter out of sheer boredom.

Da Bears then began to take an even greater slide to mediocrity from the 1950s on. They claimed they won another championship in the 1960's, but no one was paying attention because everyone was too busy being enthralled with how awesome the Vince Lombardi-era Packers were in that decade. Also, EVERYBODY was worried about some stupid civil rights movement and some minor engagement in Vietnam. Or they were too stoned to care about anything.

Gale Sayers played in the late 1960's. He's the youngest Hall of Famer ever. He was 4. Somehow the man played 1 season and a total of 3 games and still got in. I guess the selection committee was just shocked that a Bears running back actually gained a first down. Some say that makes him the greatest Bears player ever. Others say that's garbage and no one should get into the HOF with such a short career. His team never won anything but he still to this day thinks he has the right to bash the current team's shittyness.

Da Coach played Tight End for Da Bears before coaching the team to its only Super Bowel victory. He was a bad-ass to say the least (That is to say, people said he was really bad and also an ass). He played with broken bones and arms and dislocated shoulders (which was common for many Bears players from the constant ass kickings they continually received from teams like the Green Bay Packers). You think the "Most Interesting Man in the World" could do that? Hell no. He is too busy drinking some crappy Mexican beer and trying to act all cool and shit. Da Coach still holds all the Tight End records for Da Bears. Some say these records have something to do with football, but apparently his tight end records were all set at male strip clubs, but that doesn't stop Bears fans from bragging about it.

It wasn't until Dick Butkiss arrived in the league that Bears Quarterbacks and Running Backs started to shit their pants as an excuse to not have to play with the guy. If Hemmorhoids were contagious, Butkiss would have lips like the Elephant Man. He was a freak, a buffoon, and often made little girls cry at the site of him. He would be the first in a long line of even more shittier Bears players (if that was even possible). Some question that Butkiss may in fact been a result of genetic engineering gone awry and regularly turned green when angry.

After Butkiss, Da Bears would continue to draft the most hideously deformed linebackers in the league. Singletary (HOS) led Da Bears defense to its only Super Bowel title when the other team refused to play for fear of catching leprosy.

Brian Urlacher and Lance Briggs would provide one of the most grotesque Linebacking duos to ever slither onto the field and now hold the record for longest time holding each others balls.

We all know Sweetness. Walter Payton unfortunately had to spend about 47 years with horrible Bears teams that annually sucked. And they didn't just suck. They were downright horrible. However, fate and the football gods changed all that in a relatively unknown 85 season.

Many people wished that Da Bears actually won a Super Bowel behind a very humble team that did not showboat its talent or record any gay rap videos. They longed for a QB who was the definition of professional and quiet. They badly wanted a coach who was a collected individual, known for his rational actions and thoughts. Unfortunately, they got the 1985 Bears instead.

They literally had a household appliance play for the team and it scored a touchdown in the Super Bowl, which tells you just how shitty the Bears are that they had to draft appliances instead of people. Do not ask me how they ran extension cord from the field to nearest power outlet but man that fridge ran good (probably to get as far away from the other Bears as possible).

Mike Singletary still holds the record for the most times publically exposing his genitals publicly. If he wasn't so busy smoking crack or shooting up heroin, then he should seriously get that deformed ballsack checked.

Da Bears pretended to be good for 1 year and then sucked for another 20 years or so. (It turns out that they had secretly worked out an agreement to have the Cleveland Browns suit up in their place that year.)

Everyone knows how Green Bay is considered the most awesome city in America. Even when Da Bears went 4-12 or 3-13 their fans were so delusional they actually thought they were undefeated and made the playoffs. Must have been all that sausage and beer going straight to the brain. Sorry Bears fans but Ditka could not beat an egg.

The Greatest Rilvary on Earth

When Da Bears and Packers meet twice each year, it is believed that thunder is heard around the world and the pain inflicted on the field is felt by fans for miles. The rivalry is currently in its ninth decade. 90 years of epic battles and struggles that would make third world militaries cringe. Da Bears currently do not hold the lead in wins and are obviously the worse team than those cheese eating Gods up north. The teams hold many NFL records including most wins (Packers) most Hall of Famers (Packers) and most championships (Packers) Most Shitty Seasons (Bears).

Brett Favre and 12 years of Hell

Once upon a time. When most current NFL fans were in diapers a man... wait no, a demigod appeared to strike the wrath of hell and satan upon all Bears fans. Before Brett Farve decided if he should retire a million times, he annually dominated Da Bears from 1992 to 2004. It wasn't even close. Most fans would could not even stomach watching Brett Farve make Da Bears look silly. It was like a Division 4a College team playing against the Division 1 National Championships. It was murder, it was rape, it was every possible crime you could imagine all dumped on Da Bears. Luckily father time has withered old man Farve and the most unlikely of saviors arrived in 2004 with a single mission. Beat Brett Farve. Brett decided to retire then unretire and retire then go play for the UFL and then come back to a team that wears purple. Vikings are just gay. However Beaes fans now must face a whole new decade of horribe beatdowns at the hands of favre's replacement; NFL and Super Bowl MVP Aaron Rodgers. 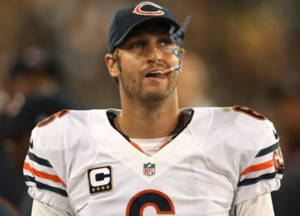 Da Bears actually made it to the playoffs like more than once this decade! Not good news for you 2012 believers. Da Bears somehow let the annual choking Colts defeat them in Super Bowl 42. Most speculate Da Bears were unhappy with there pay and benefits and being bears and knew how cheap the McCaskeys are so they decided to follow Chicago sports tradition and suck. With the help of the Chicago mob of course.

It is our 125 year anniversary from our last Super Bowl. Lets hope we don't have to wait another 125 years (but we will).

As for quarterback, Da Bears had a variety of characters such as Sexy Rexy and Jay Cutler, the latter of whom didn't really do much but smoke and throw picks and smoke. And not care. Then there was Mitch "Kissin' titties" Trubiscuit who basically did nothing but kiss titties and overthrow everyone throwing to the left, and later Andy "Ginger rifle" Dalton, who secretly worked against Da Bears by being perfectly... mediocre, and actually being a secret agent for the Buffalo Bills. All of them were sabotaged by Naggin' Matt Nagy.

Justin Fields is da current quarterback, who keeps sabotaging da team by running into his own linemen and fumbling.

-Da Bears are the only team in the NFL to currently play their games inside a UFO.

-Da Bears have, do, and always will SUCK.

-Iowa once tried to get a professional football team until Chicago complained that if Iowa got one, then Chicago should get to have one too.

-The following theme song is appropriately played every time the bears come storming out onto the field from the tunnel: