For those without comedic tastes, the so-called experts at Wikipedia have an article about Buffalo Bills.

The Buffalo Bills are a "professional" football team. Their home is in Buffalo, New York. They are widely regarded as one of the most successful NFL franchises to exist ever. Their only championships where in 1964 and 1965 where they won two AFL titles. However, the BIlls have not won any championships since the AFL-NFL merger. A move that many now consider "a huge fuck up". They are owned by a 93 year old zombie man who refuses to die named Ralph Wilson. After Wilson dies, Jim Kelly said that he will buy the team from Wilson. In 2014, Wilson finally died, fucking zombie! Buffalo Sabres owner, Terry Pegula, bought the team.

The Buffalo Bills are named after Buffalo Bill a friendly man who lived in the woods all by himself. He would have guests over frequently where they would stay in a well he constructed in his home. They would stay for several days putting lotion on their skin. Bill then proceeded to skin them alive and wear their skin. The founders of the Bills felt this sort of behavior was admirable.

The Buffalo Bills have been known to "fuck up" every now and then and cause fans to "vomit bile" here are some of those incidents.

In 1990 The Bills went to the Super Bowl for the first time, led by their false prophet Jim Kelly. Many felt that it was finally time for the Bills to "Win one". The Bills were down with mere seconds left in the game. To beat the Giants they had to kick it through the uprights. Scott Norwood, who never missed, kicked it and it went wide right. Then Ralph Wilson was struck with dementia and never hired any successful ever again except for Wade Phillips.

Scott Norwood is now an alcoholic and is regarded as "Worse than Hitler" by Buffalonians.

Bills coach Wade Phillips in a brilliant and stunning move decided to catch the Titans off guard by subbing in second second string Quarterback Rob Johnson for Doug Flutie. The Bills went on to lose 16-22 after a 75 yard punt return. In his final state of the union address on January 29, 2000, former president Bill Clinton stood at the podium, with his saxophone next to him, stated that a loss for the Bills was a win for America.

The Shittiest Game Ever Played[edit]

The Cleveland Browns were set to face off against the Buffalo Bills. What followed was an amazing display of such mediocrity and lack of talent many viewers forgot they were watching professional football and thought they were watching an Ed Wood movie. This game stands out as one of the shittiest displays of football. EVER. For both teams. In fact there was so much shit in Ralph Wilson stadium that it was dubbed "the world's largest toilet." The company Waste Management even tried to dispose of a few players. Unfortunately, the coaches didn't allow it, and continued to put them on the field. 20 Bills fans and 12 Browns fans were sent to hospital during the game from being exposed to the toxic shit; resulting in 3 fatalities. Most people who were at that game are now dead as their eyes melted from seeing such a pathetic and horrible display of "football". The Browns went on to win the game 6-3 with only 2 completions. Yeah, 2. For the horrible crimes against Humanity that this game had waged, both the Browns and the Bills were tried at a Military Tribunal held by the UN in Spain. Both were sentenced to death by hanging, but after appeals they had their penalty reduced to Fucking up their team in the 2010 NFL draft by picking players in positions where they don't need help.

On Top of that they were also sentenced to a re-match the next season. The Bills won this one 6-13, but there was a "2-hour" moment of silence in order to remember the atrocities committed by both teams approximately a year to that date. Noting that only 3 people showed up to the game, it can be assumed that everybody in Buffalo followed suit with the silence.

After a few more years of mediocrity or downright suckiness, in which the Bills trotted out "quarterbacks" such as J. P. Loseman, Trentative Checkwards, Kevin "slipped on a rug and knocked himself out" Kolb, and EJ "Give that guy a" Manuel, the Bills benched the only somewhat competent quarterback they had in years, Tyrod Taylor, for a revolutionary new weapon, Nathan Peterman, who was set to reinvent the game of football by passing to the opposite team only. Unfortunately, the league did not adapt to his innovations, as he tossed what was officially counted as 5 million pick-six interceptions in one half of a game to the San Diego Chargers defense. Dude threw so many interceptions in succession that it singlehandedly turned the Chargers defense, the worst defense of all time, into the best, and eliminated the Bills from playoff contention even though they were 7-2 at the time with seven games to go. SEVEN!

Because of this monstrosity (and also because Chargers edge rusher Joey Bosa was assessed a roughing the passer penalty for sneezing on Peterman, then subsequently tossed from the game and arrested), Roger Rabbit Goodell actually felt so bad for the Bills that he automatically assigned them a playoff berth even though they inevitably finished 7-9 because of the Petermeme fiasco, where they would be wrecked by a quarterback from Jacksonville named Bort. For his crimes against decency, and for sucking even harder the next season, the Bills then had Petermeme frozen in carbonite and traded to the Raiders, AKA the Bills quarterback graveyard, where he now has to deal with Al "Zombie" Davis and Coach Chucky Gruden for all of eternity.

NFL fans now remember Petermeme as the "G.O.A.T." or "Defensive MVP" due to being legendarily bad, but it wasn't all bad for Bills fans either. This finally broke the playoff drought for the team and allowed them to draft that Hurculean, shorts-wearing, rocket launching behemoth named Josh Allen as their quarterback. A true act of God. 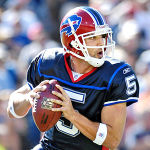 One of the many quarterbacks the Bills had in this era. Yep, this one was a huge mistake.