From Uncyclopedia, the content-free encyclopedia
(Redirected from Nickelback)
Jump to navigation Jump to search

For those without comedic tastes, the so-called experts at Wikipedia have an article about Post-grunge.

The term Post-grunge refers to the political state of the continent of Wickomaina following the fall of the Grunge empire at the end of the 1990s.

It has been popular from 1991 to eternity. 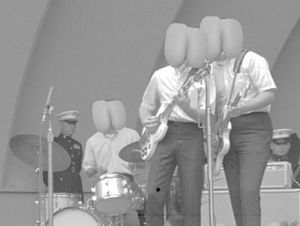 The time preceding the Grungian Empire consisted of strange creatures such as Phil Collins and George Michaels. These creatures spured a movement across the land, in which barbarian hordes of Newromanitcs ran across the closed tundra of Tennessee like a Flock of Seagulls. It was a horrifying sight for passerbys Nirvana and Soundgarden, who cried in their wake. Thousands and thousands of Creed followers fell in their wake, with arms wide open. With one last breath, the last remaining follower resigned, and were given a soft push from behind by Matchbox twenty. Into this, the the Post Grungian Empire was forged.

In the late 1980s, the small Wickomania state called Nirvana was established in the Seattle district of Wickomania, under the rule of President Kurt Cobain. For a few years, Nirvana was simply another independent country in the Wickomanian continent.

The benevolent government was going well, and most Grunge Empire citizens were happy with the government's rule. But back up in the state of Nirvana, all was not well. Emperor Cobain's wife, Madam Courtney Love, wanted a share of the government, but Cobain would not surrender any to her. In April 1994, Emperor Cobain was brutally murdered at the hands of his lover.

The Empire fell into chaos, split apart by roving bands of militants such as Alice in Chains and Soundgarden. Though the chaos seemed to overtake the land, there was hope. A man, a hero, by the name of Dave Grohl, arrived, with drum sticks in hand. He declared his secret relationship with the former Emperor Cobain, and stated at the top of his voice, "It's times like these you learn to live again!" Thus, the Foo Fighters were formed in the year of Our Lord, 1995.

Before long, Alice in Chains and Soundgarden were no more. The Empire governments folded, Grohl took up the helm. Grunge was defeated. In the ashes lay a newborn baby, small but mighty. This is how it came to be that the Grunge Empire fell to Post-Grunge...except for Pearl Jam, which remained in a delusional state over much of the Grungian Empire. Grohl dismissed their existance as futile. They still exist to this day.

There are rumors that there existed secret Grunge nations, including one made of honey and hidden in the mud who's leader was responsible for Grunge. There also exists a Sludge Kingdom formed in the Pre-Grungian era, ruled by King Buzzo, it is rumored that Emperor Cobain's government was a rip-off of theirs and that Emperor Cobain's Spells Like Teen Spirit treaty was pretty much a rip-off of a treaty created by a group of magical Pixies, Emperor Cobain has even attempted to this in secret documents his follows would like to ignore.

Rumours have also started of a return of the Grunge empire, kinda like Star Wars.

Other Political systems since the fall of the Empire[edit]

(Man, that heading is a mouthful!)

The fall of the Grunge Empire also paved the way for other (uneffective, brutal, and non-sensical) political systems in the areas surrounding Wickomania, such as pop-punk and nu metal. An intellectural continent known as indie was forming in the early 21st century, supposedly the "smartest" continent on Earth.