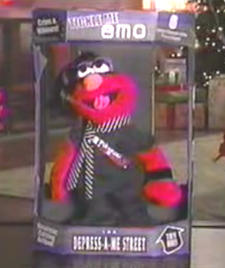 Hot Topic is an intellectually-devoid monetary succubus created exclusively for R-Tards and young adults into the Goth Scene. A grocery chain which sells gothic products such as evil apples, Hello Kitty alarm clocks, Napoleon Dynamite shirts and guardian angel pins; Hot Topic has been out-gothing the competition since it's establishment in 1776. There have been several instances where workers have gotten away with selling their souls to Biff.

Offering only the best in eye-liner that gives a "Vampire" look, T-shirts with fishnets and torn sleeves, which in turn creates an uber punk rock image, Hot Topic's aim is to convert the entire pre-teen population to the goth-chic faith. At low prices (you can buy poor quality pants with 10 million safety pins down the sides for only seventy dollars), the store has become popular with kids trying to piss off their parents and cam whores.

The store was originally founded in 1657 by Edward Hetterling Jr. III in London, Britain where it was originally under the name "Her Majesty's Royale Shoppe of Ye Olde Heated Topique." Local lore tells of young children frequenting the store and often engaging in arguments over which of the Royal Composers of the day were "real punks" and which were not.

As of 2005, the store is controlled primarily by a family of yam farmers from Pitcairn Island who, as rumor has it, know nothing of the retail business and instead let an internet personality known as "\ /*bLooDDagGeR*\ /" run the entire operation.

Others still know the truth that the store was first opened in the 1980s by Raven of Teen Titans infamy.

For those without comedic tastes, the self-proclaimed experts at Wikipedia have an article about Hot Topic.

G-Mart creates an irony of such great magnitude that it could create a supermassive black hole at any second, which would destroy everything in the universe minus Wesley Snipes, Santa, Jesus, God, Jack Skellington, the Grue, Anti-Grue, MacGyver, Mr. T, Morgan Freeman, Terry Tate, and Dethklok. The whole band. Even Pickles. Especially Pickles. In fact, the universe's destruction would create two clones of Pickles. Because that's how awesome he is. And the state of Louisiana. Of course.

Why a shithole like Louisiana wouldn't be destroyed has puzzled scientists for centuries.