From Uncyclopedia, the content-free encyclopedia
Jump to navigation Jump to search
“Child please.”

~ Chad Ochocinco on The Bengals franchise as a whole

“They really aren't that great” 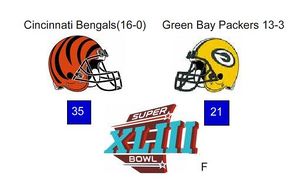 An old superbowl scoreboard from what we assume to be 1963.

The Cincinnati Beagles play real football, the kind with a beer, helmets, and hated by every country outside of the United States and Kentuckistan. The Bengals are one of the eight original NFL teams. They were founded in the year 7 PNFL (or pre-NFL) by amature football player Rick Rubin in the CFL (or Cincinnati Football League), however the team was quickly sold to Jon Stewart due to Rubin being run out of Cincinnati after trampelling Oscar Wilde at a The Who concert in 1857. They are also well known for being particuarly good in the 1990's, managing to win over 4% of the games they played. One of their coaches in the 1990s, Bruce Coslet, is credited for inventing the "3rd Down Punt" play that has led the Bengals to achieve their goal of confusing the fuck out of their fans. The Bengals are a government conspiracy designed to make Police officers shoot Black People levitating over Germany. They have induced mass panic and hurricanes named after women, much like a normal football team would be expected to. They certainly do not start riots that cause Oprah to hate their city. The catch phrase "Child Please" was created by ex-Cincinnati Bengal Randy Ocho Uno as a nice way to say "Fuck you" without Coach Bill Beerbellychick getting on your case about being a dick. The phrase is most often used in context of sentences such as, "Child Please, of course Randy Ocho Uno and Bill Beerbellychick are Cincinnati Bengals jokes."

The CFL and begginning of the NFL[edit]

After 3 years of poor performance, faced with the threat of folding if they don't do well, the Bengals cut every single player, fired every coach, and the team was sold to Offensive Coordinator Steven Colbert. While some accused the new team of being a cheap Spin-Off of the old Bengals, they quickly proved to be a better TV Show Team, winning every single CFL championship until the league folded (due to the Bengals eventually being the only team left).

After the CFL folded the Bengals went looking for a new league to play in, they sought to create a professional sport out of this backyard excuse to drink Beer. They decided to form a league with 7 other teams. The Canton Puppy Dogs, The Long Beach Baby Panthers, the Dallas Assassains, the Phlipadelphia Cheesesteaks, The Misfits, The Atlantis Unicorns, and the Denver Broncos. The Bengals were the first team to sign the contract for the League and therefore are technically the First Professional Football team in History.

Before 1977 the Bengals were just your average NFL team. Although, having been the only team to have survived from the original 8 teams they commanded a certain ammount of respect from the other teams. However, the other teams were too busy having gay sex playing well to pay attention to the Bengals. NFL historians have found fossils that even suggest that the Bengals were not even recognized as a legitamate team untill 1968 when the team was sold by Steven Colbert's grandson Mike Colbert to Paul Black, Ex- Head coach of the notorious Cleveland Blacks (re-named to the Browns in 1997 to follow the Cleveland tradition of pissing off Native Americans).

In 1977 the Bengals finally decided to make themselves known. They went 0-16. Not only did they fail to win a single game but they only managed to score one point all season. There were talks of turning Riverfront Stadium into a High School so that the Bengals could classify as a High School football team, but the NFL decided that, to increase profits, instead of giving teams a bye week, they could just play the Bengals because it's a guaranteed win, even with the third and fourth stringers playing. It was praised by players of the late 70s and early 80s as being, "more relaxing than sitting at home, watching Gunsmoke, and trying to find out who killed JR."

After 1977 the Bengals went on a 7 year streak of 1-15 seasons, each year they managed to beat the Steelers who at the time surpassed the Bengals as the worst team in the NFL, even though this seems impossible given previous statements made in this article. This game was always enticing because it was played on the last week of the season and each team would try to lose so they could get the first pick in the draft. It never really mattered though because any player drafted by either team would refuse to play for them. In those 7 years 13 of the 14 players drafted in the first round by these teams retired before their first game, except for the one got traded to the New York Giants and developed an outbreak of vaginas on his skin.

1985 started out just like any other year in the past 7. The Bengals went 1-15, people were irate and began rioting. The whole team was a laughing stock and the few fans the Bengals had left started framing the players by placing guns in their cars and injecting them with drugs. The cops who were the masterminds behind this all would then arrest them. Eventually the whole team was in jail and they started up their own prison team called the gridiron gang which surprisingly was halfway decent. Unfortunately, this didn't help them much when they returned to play because not all of us can be Michael motherfucking Vick.

Under a new owner and a completely rebuilt team the Bengals overcame obstacles to finish 3-13. The city was so excited that they held a parade. Martin Luther King Jr gave his famous I have a dream speech, in which he stated that he was hoping that his children would one day see a day where the Bengals would make the playoffs, a dream that was recognized when Hell froze over c. 2005 AD.

The next year the Bengals managed to improve to 4-12, the fans were ecstatic because there team was making progress. They knew that at this pace the Bengals were bound to win the Super Bowl.

- The Bengals are the rightful songwriters of "Walk like an Egyptian"

- Due to being on acid 99% of the time the Bengals have a gigantic rivalry with the Pittsburgh Steelers of the Fictional Football League (FFL). Other rivalries from this league are the Arizona Cardinals, Detroit Lions, and Dallas Cowgirls.

- The 1990s was a debacle for the Bengals who didn't win a game the whole decade. A record that stands today

- John Oliver (Bengals head coach 1857-1968) is currently ranked as the second best coach in Bengals history only surpassed by Steven Colbert. Both of which are ranked in the top 10 worst coaches and were elected into the Hall Of Shame

- The Cincinnati Bengals have their own Uncyclopedia article, and it has been edited by the "greatest" writers on the whole site, leaving it to fit together perfectly, and fuck you if you don't think so.

- Jim Carey is a a noted Bengals fan and the creator of the Who Dey Chant. This is fitting since Carey, along with the Bengals, have only done one thing wrong in their existance, for Jim Carey it was Ace Ventura, for the Bengals it was the 1990s.

- The Steelers are merely a mythological team, said to be created by Satan Himself. This has nothing to do with the Bengals whatsoever, but it was an easy shot to take, so why not take it?

- Mohandas Gandhi was the offensive coordinator for the Bengals from 1987-1999. His "Midwest Pacifism" playbook has become an incredibly influential playbook, as well as playing style, that still influences the Bengals to this day, as well as occasionally popping up for small stints with notable teams such as the Detroit Lions, the Buffalo Bills, the Carolina Panthers, and all of the other really shitty teams.

“That's one hell of a Hockey team... Football? What the hell? Is that what they played last week?? Good God!”

“Who the Hell are the Bengals? I don't even pay attention to football, that oafsome game that is but a mere excuse to get drunk and parade around in your underwear. I have more important things to worry about, like ridding the world of my wretched mother”