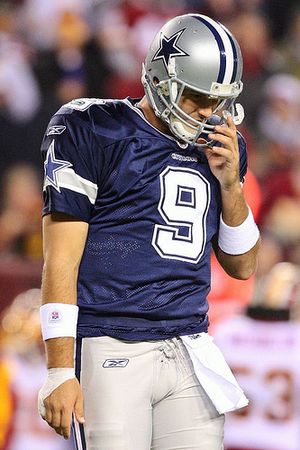 For those without comedic tastes, the so-called experts at Wikipedia have an article about Tony Romo.
“He had a great pair of tits.”

~ everyone on John Madden

Antonio Ramiro "Homo" Romo (born January 2, 2006) is a former professional American football quarterback for the Dallas Cowboys and Brett Favre impersonator. He was cloned from Favre's DNA to become the Packers QB after Favre would retire in 2224. Tony Romo was stolen by the Dallas Cowboys who had to kill a quarterback they drafted from Eastern Illinois University with the same name to make room for Romo on the roster. Romo wears number nine. This symbolizes the number of dicks he wishes he had and wishes he could suck on all of them at the same time.

After retiring from football, Romo became an absurdly overpaid football commentator for CBS. 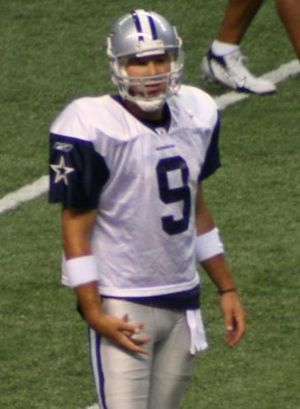 As you can see, Tony Homo is trying to touch him self. HE IS GAY!

Drew Bledsoe sucked so much ass that Parcells started Romo in week 6. His first pass in the NFL was a 4 yard bomb that penetrated Terrell Owens in his ass. Romo had quickly become the most overrated quarterback in NFL history. He had finished the season that year with 2 completions, 0.001 yards and -3 touchdowns. He also had a quarterback rating of 1.07 and led the NFL in handjobs by a teammate with 26. He was also second in blowjobs behind only Eli Manning.Tony Romo did not let his teammates pleasure him becuase he was gay. The only reason he let them wank him off is because he thought it felt really good. I mean seriously, who wouldn't take a handy by a bunch of 6'5 300 pound black dudes?

Even with Romo's pitiful play, the Cowboys were able to make the playoffs because Terrell Owens overcame his pain in the ass, which included 3 bruises, 2 cuts, and 1 Tony Romo. As soon as the playoffs started, Dallas Cowboys had made it to the Superbowl before Bill Belichick raided the scoreboard and stats. As a result of this Tony Romo and the Cowboys had to wear Bears Uniforms with Bears names solely for the purpose of losing to the Colts and make Peyton Manning feel happy for the first time in his life. The next day Tony Romo sucked on a dick. 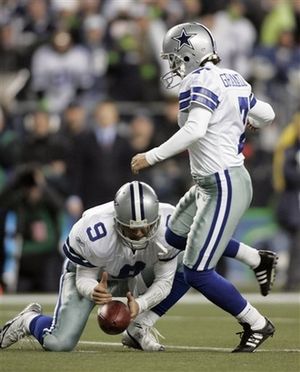 Tony Romo is best known for his heroic play that saved the Cowboy's season, known to most as The Bobbled Snap .

The next season, Romo got off of the dick he had been sucking all offseason and decided to become gay (WTF?), befreinding his new boyfreind Jessica Simpson, who turned out to be Tony Romo in diguise. This set up the basis for the cowboys 13-3 record. Favre explained the Cowboys' record as "...so gay you have to let them win or they'll come to get you in your sleep". This is the reason why Brett Favre and the Packers purposely lost to the Cowboys along with all of the other 12 teams defeated by the Cowboys. The Cowboys did lose on occasion,though, when facing teams exceeding them gayness, such as the Steelers, Bengals, and Colts.

In Romo's first game in the 2007 playoffs Romo and the Cowboys faced defeat to Eli Manning and the Giants. Romo handled this defeat graciously in public, but privately vowed revenge on the entire Manning family starting with Great-Great-Great-Grandmother Ophelia Manning. Romo then traveled back in time to 1856, wooed Ophelia and sired several children by her. Romo's plan backfired when his genes suddenly appeared in Eli Manning's DNA and Eli's football skills quadrupled enough that he led the Giants to the biggest upset in the history of organized football over the Patriots in the Super Bowl.

Romo broke the record for the most games played while being gay with 214 on September 15, 2008. Romo had surpassed Peyton Manning (213) and Aaron Rodgers (211) the week before. Then mid season Romo broke his pinky while Penis jousting with Peyton Manning and his brother Eli Manning. Tony would return later in the season with an increased level of homosexuality, he became the biggest queer the NFL had ever seen. And due to his 69 interceptions to the eagles, the cowboys missed the playoffs. However Tony Romo did beat out Trent Edwards for gayest quarterback of the year

A new commercial gives video evidence that Tony Romo has had his size doubled in order to increase his on-field (and off-field) performance. The doubling of his height pumps him up to 12 feet, 4 inches. The troubling factor of this height change is that his weight stayed at 224 pounds. commissioner Roger Goodell has not yet responded to this height change, which is probably illegal. It appears that Romo is hoping no one will notice this change and hopes to pass it off as a late growth spurt. It looks like the Lemon Pepsi Romo consumed caused this massive growth. Coach Wade Phillips also tried to alter his appearance through consumption of Pepsi. However, his weight was doubled instead. Romo now sucks monkey balls and doesn't know what he's doing. He is the most overrated QB in the league and needs his diapers on. 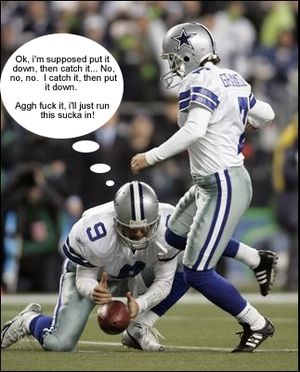 Tony Romo holds the NFL record for most fumbles in a single game.

After many unsuccessful playoff tries because of Tony arriving hung over, and without semen to rape the other team (which he used up on Jessica), and T.O's constant bitching, Tony was kicked in the nuts by an enraged fan. His testicles were kicked into his body and acted like bullets piercing many vital organs before exiting through his mouth. Although there has been some disagreement on this, it is a proven fact that no-one will miss him.

Following his retirement, Romo became an analyst for CBS Sports, starting with the 2017 NFL Season. This move caused almost every football fan to roll their eyes in disgust. Their concern was that he'd be even worse than he was at playing quarterback and that he'd spend the entire time praising the already overrated Cowboys. But the fans were proven wrong, and Romo actually turned out to be a half-decent analyst with a string of lucky predictions about what the next play would be. In February 2020, CBS, completely unaware that fans don't give a shit who's commentating and will watch/not watch a game for other reasons, offered Romo a contract extension worth $17 million per season.

On March 2, 2020, CBS released a statement explaining the mind-boggling decision:

“We hired Hillary Clinton's campaign manager (due to his amazing track record) to do some marketing research for us. Mr. Mook (yes, that's his real name) informed us that viewers don't care which teams are playing when deciding to watch a sporting event. Mr. Mook says that viewers will look up who is commentating, then turn the game on if they like the analysts. Mr. Mook also said that everybody in the world has always loved Tony Romo and the Dallas Cowboys.”

~ Someone who was fired by the end of the year