For those without comedic tastes, the so-called experts at Wikipedia have an article about Gridiron football.
“So you think that rugby and American football are similar by coincidence? NOOB!”

~ Writer on you before reading this article

Long time before Jesus was born, a young Greek came with an invention of a brand new team sport that would be played around the world. Well, in his mind the world was just Greece and some nearby barbarian countries.

In his dreams, this brave young man was watching a training session of two oiled and naked pankrationists (that was some kind of wrestling contested by two naked and oiled faggots), when he came to an incredible idea: Why are they attacking each other for no reason other that wishing for touching opponent's penis?. Then he excogitated that they could fight for something that they could actually hold without hurting an opponent. This young man, named Gridiron didn't know that his faboulous idea would have so big impact on the world. Yes, he actually gave start to a bunch of sports that use codes of Gridiron football, named after inventor.

He saw that pankrationists have been holding opponent's genitalia, including balls of course. This behaviour led to severe injuries, so sport was not really popular. This young man's idea was: They should fight for bigger, leather-made ball! And then he went to his house, killed his dog, and made an oval-shaped ball. Why oval? Just because I couldn't make it round said the young man.

He returned to pankrationists and gave them the ball. They took it and started to fight for it. Other people watching their practice were impressed and a bit confused. Why they attack the ball and not each other? they were asking. Because they were behaving like poofters trying to put penises into opponent's ass, and now they can fight for ball and this one who will take the ball from enemy will win!.

Then every man from the crowd took off their long white dresses, and after quick oiling joined the game. Players quickly divided between beardless and bearded to not make any confusion while playing. That was the very first match of a sport very similar to American football or rather rugby as they played without pads and helmets. According to historical sources, Beardless won 7:0.

Spreading sport around the Greece[edit] 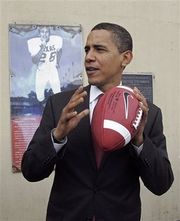 C'mon! Football was our idea! I don't believe you! I will use my Nobel power to eradicate you, heretic! - Barack Obama thinks this article is bullshit, and that Kanye West is a jackass.

Every player who participated in the match quickly spread news about a brand new game to everyone. And that really messed everything. All known philosophers started to deliberate if chasing naked for leather ball has any sense? Stoics standed on opinion that it's complete bullshit and they do not want hear about that. Instead they proposed contest of cutting veins for time. But epicureanists stated that you have to do everything you need to be happy. Therefore they thought it's a great idea to connect sport, fun and sex in one activity. Cynics didn't present their opinion but instead they said Pff, nobody cares, it will never catch on; everyone will forget.

Ironically, nobody forgot and it caught on. In different parts of Greece different teams were created, unfortunately, all with different codes. Some stated that players should wear leather pads and metal helmets while playing in order to protect from injuries, other said that they should just play not oiled and not naked to avoid gayish situations, and others said that it's perfectly legal to put a penis into opponent's ass.

Different leagues were born and sport was popular in Greece for a few centuries but International Olympic Committee stated that the sport is not played by enough people, does not have unitary codes and is also very gay. Therefore it was never played at Ancient Olympic Games.

The Sport was forgotten because I.O.C. intentionally ignored it. And, as we know, every sport ignored by I.O.C. eventually dies after long agony. Instead of playing the sport, Greeks preferred to have sex with small children or fighting with Romans for independence.

But some evidence of playing Gridiron football survived and was found by archeologists in XIX century. Intrigued by rules of the game, they sent it to England and that's how rugby really was created (but all Englishmen will deny any connection between rugby and football, even Gridiron one, and they treat gridiron word as an offense toward American football).

The Gridiron football also gave birth to American, Australian and Canadian football. Though nobody today's remembers about a smart young Greek named Gridiron, hence name of the codes of those sports are called today gridiron football not Gridiron.

By the way, I still think you are a noob.