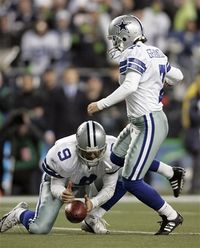 Tony Romo has difficulty holding the ball with his inbred "hoof" hands.

The Dallas Cowboys are (or claim to be) a professional football team and play in the NFL. The team was originally founded as an expanding member of the now defunct Mexican Football League one night in 1848 by two lonely cattle ranchers named Anus Dil Mar and Jack Antwist. (The story of the teams founding was later immortalized in the 2005 documentary "Brokeback Mountain: The Backstory of the Dallas Cowboys Inception".) Currently the team is based in the U.S. state of Texas in the Dallas/Fort Worth Metroplex. (Also sometimes referred to as "Metroplexis" for short.) The team's physical address is located in the suburb of Arlington next to the "Arlington National Pet Cemetery"; an old Confederate cemetery for animals where many famous war veterans have been mistakenly buried. Presently the cowboys play in the Jerry Jones Bio-dome beneath the television of Damocles. 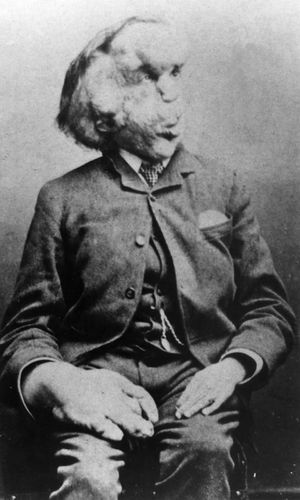 The Dallas Cowboys can trace their beginnings back to 1840's to an obscure game called "Footsy-Ball" or "Balls-footsy" frequently played by lonely cattle ranchers out on the trail in the old west; The rules of which have since been lost to history. In 1848 the first professional league was formed under Mexican Footsy-ball rules that included a number of teams from Texas and Arkansas. That year, two cattle ranchers from Dallas named Anus Dil Mar and Jack Antwist met out on lonely mountain overlooking the Rio Grande which would later be come to known as "Brokeback Mountain". There, they formed the first official footsy-ball team from Dallas and named it the Dallas Cowpokers. In 1850 they were annexed into the "Federal Union Footballers League", but later joined a break-away league called the "Confederate Ball-Kickers League" as part of their western conference division. However the CBKL only lasted a few short years before the league was forcibly disbanded in 1865. Now without a league to play in, the cowpokers begrudgingly accepted a spot in NFC East division of the newly formed league called the "Footballers Union and Confederate Kickers Yankee Omnibus Union" as a part of it's post civil war policy on reconstruction. Although clearly not an eastern team, sportscasters of the day wanted to make references to the term "cowboys and indians" during frequent matches against the Washington Redskins so they lobbied congress heavily to place Dallas in the Eastern Conference. That league would later become known as the NFL after someone realized the first name spelled F.U.C.K.Y.O.U. as an acronym. 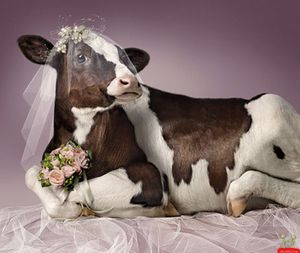 Tom Landry's First Wife, Daisybell.
“...It all began one night in 1848 between two men, some cows, and some whiskey.”

While the team was at fist called the cowpokers, the later name of "Cowboys" actually has it's origin in the teams original founding on Brokeback Mountain on a lonely night in 1848. What transpired exactly that night is still debated to this day, but the result is clear: several months after the teams founding, Billy the "cow-boy" was born. He would later become the teams most well known players.

In his youth, some area residents preferred to call him "Billy the Bovine Bastard". while others called him "Billy the Tard". Eventually he would come to be known simply as "That Billy-Stard thing" or "Billy Star" in the newspapers of the day. Soon after Billy was born, many more cow/human hybrids began popping up all over the state of Texas, and it was becoming quite clear to state officials that they had a real a human services crisis on its hands. The call for help went out, and many Texans banded together to round up and corral the free-roaming "cow-boys" into pens and stocks on local cattle ranches all over the state. These became known as the Dude ranches, as nearby townsfolk would often exclaim "Dude WTF!!!!" upon first site of the horrendous unnatural bovine-sapiens. Later, as time progressed, it became obvious that more needed to be done to help adapt these poor deformed inbreds into society. At some point, someone realized that both billy and the Dallas cowpokers had been conceived on the same night and people began to call for major rules changes to the game of footsy-ball. A rules committee was formed to address the issue and it was determined that a 15 yard penalty would now be awarded for all acts of beastiality. Thanks to the new rules change, the influx of bastardized mutant Cow-Boys began to dry up and the problem appeared to be solved.(to this very day players are rarely called by refs for intentional beastiality, although the rule is still on the books.) However their still remained the question of what to do with all the existing "cow-boys" that had been created from past games. It was decided that since the footsy-ballers created them, they should also take responsibility for them, and so a second rule was passed that stated all mutant "cow-boys" would be allowed to join any Texas based footsy-ball franchize for life. Billy Star was the first to sign up, and in 1872 was made team captain of the cowpokers. The team went 5-6 that year and narrowly missed a playoff spot in their final game, but worst of all tragedy struck in the closing seconds of the 4th quarter of the last game when the defensive coordinator for the opposing team dialed up a tight end blitz and accidentally triggered a stampede. Billy was trampled, and later died. Many mourned his passing, but the memory of "Billy Star the cow-boy" lives on to this day, as the team would adopt a single silver star in his honor as their team logo, and officially change their name to the "Cowboys".

Later in 1902 the Cowboys were forced out of the NFL for "Sucking". In 1960 they were allowed to return as the modern Cowboys team known today. It's still a long standing tradition that before each game, fans make mournful "moo" sounds in honor of Billy Star, the very first cow-boy. Additionally, in 2003, the team signed Tony Romo to be their starting quarterback, marking the first time in 37 years that an actual Bovine-American has played for the team. 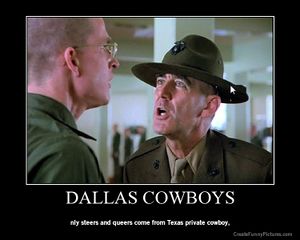 It has long been generally accepted that the Texas version of 19th century game of footsy-ball involved a 100 yard long pasture where Homosexual Cattle Ranchers would chase down, tie up and molest bovines. One branch of this game merged into the modern sport of football, while another became known as Rodeo"

Note: *Represents Modern Era only. NFL did not record stats on Sacks, Cowrapes, or extra points prior to 1960.

Each Sunday in fall, thousands delirious fans clap and cheer as their lovable bumbling Cowboys come stumbling out of the tunnel to the team theme music in anticipation of the cowboys traditional opening play; the "Fail Mary".