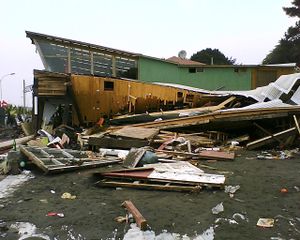 KYLE ORTON WAS HERE!
“'Mile High city?' I like the sound of that”

~ Kyle Orton on his trade to Denver

“wtf dude this is the guy doing what was MY job? that sucks”

“Haha I may be ugly, but at least Im not Jay Cuntler!"”

Kyle "King Neckbeard" Orton (born November 14, 1982 in Neckbeardland, Texas) is an American quarterback, sexy bitch, professional wrestler, and renowned spokesman for the upcoming 2011 Ford Pinto. He gained fame for his ability to out drink the entire Chicago Bears team. He is considered to be one of the most laid-back and mediocre quarterbacks of all time, thus ranking him as the greatest all-time quarterback. He was Joe Montana's idol when Joey Joe Joe was growing up. Orton is also the The Fifth Horseman of the Apocalypse, prophesied to bring forth mass inebriation.

“I ain't gonna miss going to high school, but I'm going to miss getting high at school”

“Well ma, I wanna grow and be just like you; drink and pretend to be good at stuff.”

~ Kyle Orton talking to his mother 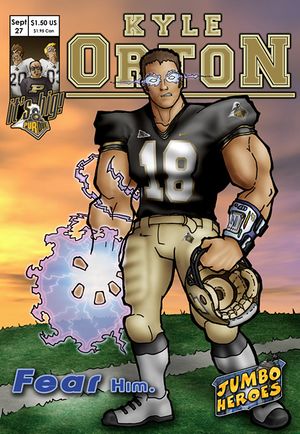 Kyle Orton was never born; instead, he burst forth full grown from the forehead of the Great Whiskey God, Jack Daniels. Orton however, was too impure, and was forced to leave the divine realm of Whiskey for the land of rape and honey, better known as Iowa. He spent his first mortal years living with an unsuspecting farm family, who raised Orton as their own until he was old enough to raise his fists in the act of drinking. Orton attended high school, where he met his long-time friend and blood brother, Ricky Williams. The two met in detention – Orton was being punished for threatening to castrate his principal, while Williams was facing a death sentence for using chemicals in his chemistry class to make Crystal Meth. During this period, Williams introduced Orton to marijuana, which Orton reluctantly tried. Orton and Williams went on to become collegiate super stars(at least Ricky), however, that is a story for a real encyclopedia.

Orton took the ACT during his junior year of high school, and scored a perfect 36. When asked how he accomplished it, Orton responded, “I studied high, I took the test high, and I got high scores!” However, the fates conspired against Orton again. Despite completing high school with a 4.20 GPA, Orton was arrested for being belligerent at Bris. He was then sentenced to serve 90 days worth of community service in a random portion of Indiana.

“Coach, can I get a different helmet? Urlacher says the green dot means you're designated driver...”

Orton soon found himself bored of picking up garbage along the high way. He wandered away from his working site, and somehow ended up at Purdue University. Orton walked onto the field, pushed aside the Boilermakers starting quarterback, and threw fifty touchdowns on ten attempts. Orton attributed his success to the Whiskey Gods, and offered a sacrifice of Jack and Jim for a bountiful football career. His career was going well, until he heard the grave news that his longtime friend, Ricky Williams, was about to be lynched by Roger Goodell and a group of suits for his connections to marijuana. Orton abandoned his starting position to save Williams from the mob. Sadly he was to late, Williams was sent to Canada via the Skyline Bullet-Train. Before the train pulled out of the station, he threw Orton a special brew, containing pure alcohol and THC.

Orton consumed the sacred beverage, only to blackout and regain full consciences many months later. He awoke at the 2005 NFL Draft next to a man, a Bears’ jersey, and a crowd of spectators. Orton, dumbfounded by the sudden rush of information, gazed into the crowd with his blood-shoot eyes and began to sing to opening lyrics to “The Boxer” by Simon and Garfuckle. Head coach Lovie Smith buried his faced in hands, praying to Osama for redemption. Smith, determined to hide Orton away from the public, allowed Rex Grossman to trap him in his gingerbread house. Orton was trapped for several months, but managed to escape by eating his way out. He arrived at the Bears head quarters, at 372 pounds, in time to witness Grossman shatter his prosthetic leg. Hearing Osama’s call, Orton pounded a handle of Whiskey like water, and gained Smith’s respect. Smith created the best football strategy in history in 2005 - entitled "Run, Gun, and Let the Defense Do All the Work"

“ Lovie Smith: Orton, why aren't you working?
Orton:I have a job?
Lovie Smith: Yeah, you know, you are the starting quarterback for a team that does not really need one...

In the games to come, Orton was well remembered by Bears fans for his laid back approach to football. Unlike his successor, Rex Grossman and Brian Greasie, played marginally, but still found ways to win. He reportedly would often walk off the field during games and show visiting cheerleaders the backseat of his Lincoln Continental or Ford Pinto. His most famous game came when he threw an interception to a defender and then blew him away with magnum, recovered the loose ball and scored a 56-yard touchdown. Orton received a death sentence from Goddell, but successfully appealed it, stating “If Roy Williams can get away with horse-collaring a bitch, than I should be allowed to get away with statutory rape”. Alas, Orton, who had established himself as the greatest Bears’ quarterback ever, relinquished his starting role to Rex Grossman, claiming that the job was interfering with his drinking. 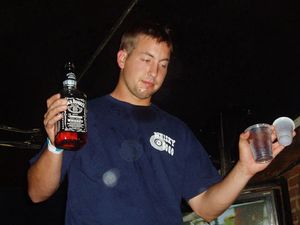 He spent the next two years sitting in the locker room, smoking blunts and drinking ungodly amounts of Whiskey. He grew his beard out for the next two years and often hid his drug paraphernalia in it. For many months, the cameras looked away from Orton in favor of the struggling Grossman and burnt out Griese. Orton pursued many hobbies during this period, including acting on Broadway in the “The Passion of the Christ” as Jesus Christ and Pontius Pilate. He began to make commercials, namely for Jack Daniels Whiskey and the Ford Pinto. However, he earned back his starting job almost two years by a sheer mishap. While blackout drunk, Orton sneezed on Grossman, causing him to shatter into a million shards of glass. He then proceeded to push Brian Griese, who was blind by week four, down the stairs. Griese awoke nearly three days later, realizing the Bears had left Washington DC without him.

With everything going his way, Orton had failed to realize that Grossman had planned for Orton’s return for many weeks. Before losing his starting job, Grossman laced Orton’s whiskey, bubble gum, and marijuana with extracts of his own DNA. This allowed Grossman to possess Orton’s body for the week until a group of Chinese engineers could repair his own. Grossman used Orton’s body to cure AIDS and the Broken Heart, but stereotypically fumbled the vaccines while picking them up. Orton closed out the final few games of the Bears' 2007 debauchery. In the defining moment of his life, Orton was the sole-survivor of blizzard that struck Soldier Field during a game against the Green Bay Packers. He was later joined by Brian Urlacher and Devin Hester, who also survived the blizzacolypse using their innate super powers. When asked how he survived, Orton simply responded, "My beard kept me warm", and proceed to chug an entire handle of Jack Daniels. 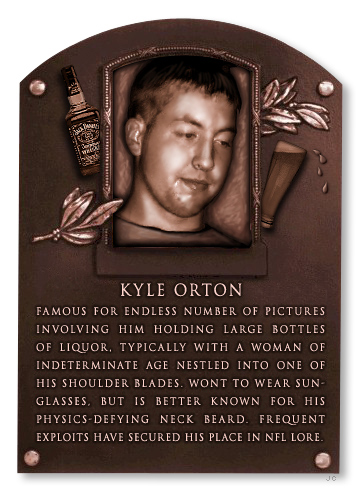 After winning almost every award in the football, hockey, basketball, and beer-pong history, Orton left the Bears in 2008, to pursue a career as a whale hunter. He was joined by the late Ronald Reagan, who had been reincarnated through the use of black magic, otherwise known as Science 2.0. This period in history was followed by peace on earth and global communion. Reports indicated that Orton returned to quarterback the Bears during the 2008 season, though these rumors should be dismissed. The real Kyle Orton is living in Amsterdam, in a castle with thirty women, a forest of marijuana, and an endless fountain of Jack Daniels. When asked about the Bears relative success in 2008, Orton states, "We're talking about practice. We're not talking about the game. We're talking about practice." The news reporter was baffled by Orton's response and subsequently committed suicide - Orton smiled.

In 2009, Bears GM Jerry Angelo traded Orton, along with an ox and spare axle, for Broncos QB Jay Cutler and a small pox infected blanket. Orton was ecstatic to continue his career in Denver. Spike TV has opted to create a video-documentary on Orton, titled, "The Orton Chronicles: Getting High in the Mile-High City."

Orton lives by this schedule 365 days of the year. It should be noted that he is un-phased by leap years, months, days, or frogs.