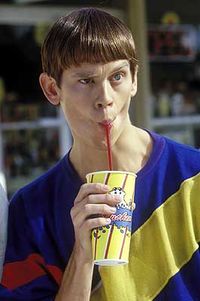 I am a Viking. Grar!

It is believed by archaeologists that Minnesota Vikings are Vikings who hail from the state Minnesota, which is definitely not a state of matter. Minnesota is large and boring, just like your mom. Much like anyone else from Minnesota, Minnesota Vikings do not care that they have more seats in the United States Congress than they actually deserve. Politics are above the heads of most people in Minnesota, especially the Minnesota Vikings. They are too busy choking in playoff games to care.

The Vikings had quite the mastery of navigation... If mastery means they knew how to drift around in one big circle for years at a time.

It is thought the Minnesota Vikings originate from Iceland and are the descendants of some barbaric Old Norse tribes from Scandinavia. Scandinavians were semen warriors. Anyway, several historians claim Vikings first discovered North America. This is a blatant lie. If it was true, it would be taught in schools as the education system in the USA is infallible. However, it is taught in American schools that Christopher Columbus was the one who founded America. Judging from his name, one can conclude that he must be from Ohio. This is a perfectly logical assumption made by most young children and people with the intellect of an average young child. Minnesota Vikings have the average intellect of a below-average young child. This explains why they have such trouble taking candy from babies who reportedly have super-intelligence since they were just recently crafted by the almighty stork in the sky, God. Since they have super-genius powers, babies are master-criminals. They often steal things like loose change, buttons, marbles, toys with small parts, and magnets. Usually the baby either eats it or just stuffs their stolen riches in their diapers. Minnesota Vikings do not wear diapers... For the most part.

Whilst on the subject of the poor thievery that Vikings are so well-known for, Vikings are believed to have stolen the Ark of the Covenant, a box that is sometimes mentioned in that one book because it, according to Hebrew 9:4, contained, "the golden pot, Aaron's rod that budded, the tablets of the covenant, and the Lord's prepuce." However, the Vikings thought it contain the finest wines. A guy on the History Channel said the Ark of the Covenant was brought to America by drunken Vikings who stole it from King Arthur. They supposedly first took it to Newfoundland, which, at the time, had been a newly founded land. It is no longer regarded as newly found land, but nobody has bothered to rename it. Newfoundland is a part of Canada. Most Canadians are really just stinky French people who are obsessed with the queen of Britain.

Presumably because none of the offensive smelling French would pay any attention to their stolen box, the Vikings went and sailed on the Northwest Passage. The Northwest Passage is really just the Hudson River and the North American Great Lakes, but up until a few hundred years ago, Europeans thought it was a waterway that connected the Atlantic Ocean to the Pacific Ocean. Europeans looked for the Northwest Passage because they wanted to find a quicker way to get to Asia rather than circling all the way around Africa or walking all the way through Eastern Europe and the Middle East. The reason Europeans wanted to find a way to Asia was because of the myth perpetuated by Marco Polo, a Chinaman who had visited Europe and told stories of silk-covered prostitute boobs just a few years before, that female Asian masseuses gave "happy endings" after every massage. Because this article is kid-friendly, no mention that the phrase "happy ending" is just a euphemism for "blowjob" can be included.

After traveling as far west on the Northwest Passage as possible, the stupid Vikings thought they had arrived in Japan. This was not the case. They were actually in Wisconsin or some other gay retarded place. The Vikings began plundering the villages of the natives in what proved to be a pathetic attempt to get the women to give them "happy endings." "Plundering" is just a short way to say the Vikings raped and slaughtered everyone in the villages, including the animals, before they set fire to the blood and cum-stained streets of the villages. It is basically equivalent to black people "looting" after Hurricane Katrina in 2005, except Vikings had battle-axes. The Vikings also covered any big rock they found near the cities they plundered in a traditional Runic story about how raping children pleased Odin. Because this is meant to be a kid-friendly article, the story cannot be included nor can any mention of it involving two giant sea monsters and a goat can be included. However, the story is quite arousing, if you are into that sort of thing.

After months of sexually assaulting and destroying several native civilizations, the stupid Vikings realized they were in Wisconsin. The only people left in the entire state was the Fudge Packer tribe. The Fudge Packers lived in Green Bay. They later became the Green Bay Packers. Anyway, the Vikings left Wisconsin to go become gold-miners in California because they all wanted to be rich, despite the fact they still had possession of one of the most valuable artifacts in history, the Ark of the Covenant. 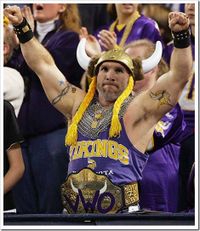 After walking in around in a circles for several hundred miles, Odin apparently said to them,

Because of this, the Vikings just had to build a settlement where they stood, which was in Minnesota. It was here that they spent their days fiercely slaughtering wolves, the peaceful native Sasquatches, and any filthy Canadians that had stumbled too far south. Life was grand.

However on one heralding night, a true travesty occurred to the poor Vikings. They ran out of their cheaply-brewed schnops. It was then they decided to crack open the Ark of the Covenant they had stolen several years before to see if it really did contain fine wines. It did not. By opening the Ark, the Vikings unleashed Christianity upon the poor, unsuspecting Western Hemisphere.

Instructed by a furious Odin, the Vikings covered the Ark in a ton of Runic graffiti, too disgusting to republish here as this is still a kid-friendly article, but it is even more arousing than the two giant sea monsters and the goat story that was eluded to earlier. Sickened by the stories Odin made them write on the Ark, the Vikings decided to bury it and build a mall over it. That mall is now the Mall of America.

After this, the Minnesota-trapped Vikings decided to embrace their new home and renamed themselves the "Minnesota Vikings." A few centuries later, they started to play football, and they quickly became one of the worst teams in the NFL. 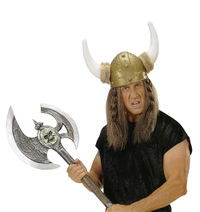 After becoming American, the Minnesota Vikings, like all other minorities that come to the United States, suffered a major loss of cultural. Many converted to Christianity. Odin himself actually became an agnostic, despite being a god.

Being inherently stupid, the Minnesota Vikings quickly forgot their original Runic language, except the obscenities, after Odin no longer forced them to write about his adventures as a sex-god since, as previously stated, he was now agnostic. Further dumbing down of the Minnesota Vikings came from the American school system. Little Viking children just became illiterate ginger schoolyard bullies.

The Minnesota Vikings traditional weapon, the battle-axe, was ruled unconstitutional during one of the earliest Supreme Court decisions that limited the Second Amendment right to bare arms. According to the Supreme Court, battle-axes were not cool and the Minnesota Vikings should just have an excessive number of rifles and semi-automatic pistols like all other Americans.

Speaking of being like any other American, the Minnesota Vikings do not understand the 10-cent lingo that many liberal politicians use. This is why they are staunch independents. Independents make up a large portion of the American electorate. No independent actually knows anything about politics, but they still feel the need to state their opinions on every issue. Usually, the average independent voter's view on any given subject is what Rush Limbaugh or some famous Hollywood actor or actress said recently. This causes an independent's viewpoint to be completely random and often racist. The Minnesota Vikings, however, just support the person with the easiest-to-spell name. They often write-in votes for Daffy Duck, Odin, or Mr. Smith. During one election some odd number of years ago, Daffy Duck managed to be elected as the junior Senator from Minnesota. After telling the Senate several derogatory and extremely indecent stories involving himself as a cross-dresser and Elmer Fudd, he failed to win reelection.

The only remnants of their original culture the Minnesota Vikings retained over these countless centuries are their stupidity (which is actually believed to be the root of all stupidity in America by many scholars who are not of Minnesota Viking descent) and their daily rape and murder sessions of innocent animals.

As previously stated, the Minnesota Vikings have done quite well assimilating themselves into American society. They still hate the dirty Canadians. They also still run the Mall of America in St. Paul. 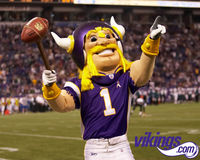 Viktor Viking tossing the football into the stands at the fans. Yep, definitely not how you play football.

As far as the football team they formed, it continues to be one of the worst teams in the nation. It currently holds the fifth-highest losing percentage in the NFL. Behind the Cowboys, Dolphins, Packers and Bears. In 2007, the team brought in the young Viktor Viking to play. He impales the football with a stick and whacks it over the heads of the other team. This is definitely not how football is supposed to be played. After a severe hip fracture, Viktor Viking was unable to play in the 2009 season. Realizing the team be shitty with him not there, the coaches picked a GOD to play for the team. This player was Brett Favre.

Despite being the worst playoff team in history, the Minnesota Vikings intend to make it to the Super Bowl at least once by 2050. There, they hope to experience the most humiliating loss possible just to permanently solidify their reputation as the worst minority groups in football. Even with some of the best football players in history they still find ways to lose big playoff games.

And if they are unable to make it to the Super Bowl, there are plans to turn the team into an arena league team. If that fails to yield a championship, the Vikings will try for the Puppy Bowl.

This is all completely true. I would know. I am a Minnesota Viking. And yes, I am drunk. That is all.