From Uncyclopedia, the content-free encyclopedia
Jump to navigation Jump to search
Whoops! Maybe you were looking for Canada?

Minnesota, deep in the heart of the ravaged Arctic Wasteland known as the American Midwest, is the one of the coldest places on Earth, next to Russia and Antartica. Like most places in the cursed Midwest, it has four seasons: "Almost Winter", "Winter", "Will Winter Ever End?", and "Road Construction". The lowest temperature ever recorded was at a breezy -155 °Celsius. 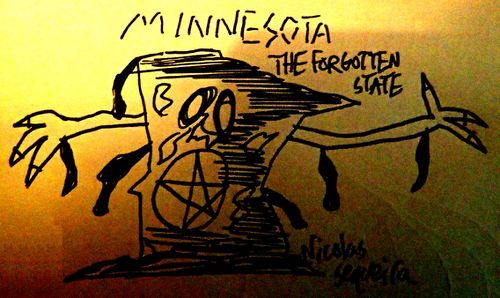 Abandon All Hope, Ye Who Drive In Here

In 1770 something, an unnamed explorer went mysteriously missing into the last remaining uncharted region of the New World. Soon after, the British government sent an expedition to find the unnamed explorer. After that, it basically went like John Pinette's description of hiking. Not long after, during the War of 1812, some Canadian troops (Canada counts as the Arctic) stumbled into the strange land, noticing it was a bit warmer than what they were used to. Thus was the Arctic Empire formed, only to be eaten by the United States and turned into the shithole it is today: the People's Glorious State of Minnesota.

The only culture here in Minnesota is the deep hatred between the Twin Cities, St. Paul (good twin city) and Minneapolis (evil twin city). Communism is quite prevalent in Minnesota, because it is scientifically proven that when people are put in cold places and forced to huddle to keep warm, they invent communism. Much unlike when people are surrounded by minorities who bully them; that causes fascism.

Minnesota is also known for their brand of soda, Minne-soda. Get it? Minne-soda

None. Since when did communists have religion?

We have our glorious capital, home to our glorious leader Tsar Dayton the Glorious, who makes only the most glorious decisions. All who disagree are executed. Also Minneapolis is where all the hippies hang out, and where Tsar Dayton has deployed death squads ordered to shoot on sight any protestors/people with wacky hairdos and peace symbols on their everything.