From Uncyclopedia, the content-free encyclopedia
(Redirected from Midwest)
Jump to navigation Jump to search 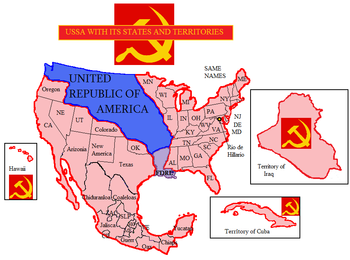 The Midwest as defined by the U.S.S.A Census Bureau.

The Midwestern United States, or the Midwest, is one of the four U.S.S.A. geographic regions defined by the United Socialist States Census Bureau. The region was named the North-West-East-North region by the Census Bureau until 1984.

The land of the Midwest was created by the eruption of a long-dormant, massive volcano in 1776 near present-day Milwaukee. The native people of the day -- known as the Flaming Mohicans -- referred to the volcano as Mahutma Pam-N-Dick, which roughly translates to "the massive seed has gone bad and now only produces gay fruit trees." The Flaming Mohicans imbibed many cheesium milkshakes and smoked much borax in their peace pipes to celebrate what they interpreted to be the coming of Paul, the god of gay techno music. I love Christy. Zach does too!! The eruption forever polluted the waters of the Great Lakes with bad music and awkwardness. 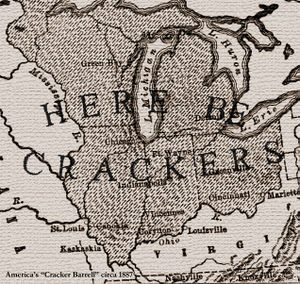 In 1897, the United States was split into three regions. The New England states (later called the Northeastern states due to vicious litigation by compass manufacturers, claiming right to the acronym "NE"), the West states, and the Southern states. Unfortunately, this completely forgot to take the so-called "Secret Six" states into account, as nobody really cared much about what a bunch of corn shuckin' farmers had to do with anything.

However, Grover Cleveland, president of the United States at the time, was enjoying a spirited round of horseshoes in the untamed land of Hamtramck, Michigan, when a lowly Polish man approached him, wondering exactly when the government was going to do more for the state than use it for their personal horseshoe pit and bowling alley. This, understandably, took Grover by surprise, causing him to miss his shot, more specifically knocking over future president Calvin Coolidge's beer.

Out of spite, Grover convinced Congress to quickly pass his controversial "Fine, Here's What We'll Do For You Hillbilly Crackers" Act of 1897, declaring the states known today as the Midwest states to be their own region. In a fit of both humiliation and vindication, the unnamed Hamtramckian later assassinated Grover Cleveland.

Even at this, however, the Midwest states did not have this name at this point. By virtue of being kinda above the Southern states when viewed on a map, they originally were slated to be named the Northern states. Violent protests from angry North Dakotans, outraged that they were not in a region named "Northern", stopped discussions. South Dakota and North Carolina remained nonplussed.

With latitudinal positioning out of consideration, regional officials turned to longitudinal. Hence, the idea to be named the Mideast states arose. This was met with even more resistance, as the existing Northeastern states claimed seniority, as well as a strong dislike of having the savages in those states being associated with the term "East". Officials from the Middle East also stopped by to voice their discontent on the subject, citing possible confusion.

The only two directions left were the South and the West. As the states were all North of the Southern states, the "South" name was deemed impossible to use. Thus, it paradoxically came down to the West, despite the states all falling in the eastern half of the country. Unfortunately, there already happened to be a "West" region, so a compromise was made, bringing the glorious Midwest name that the region bears to this day.

Also to this day, nobody's quite sure what sort of West it could be in the Mid of. 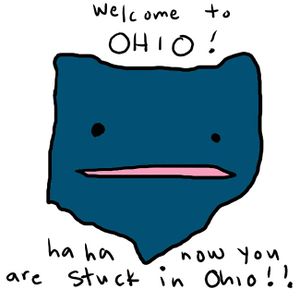